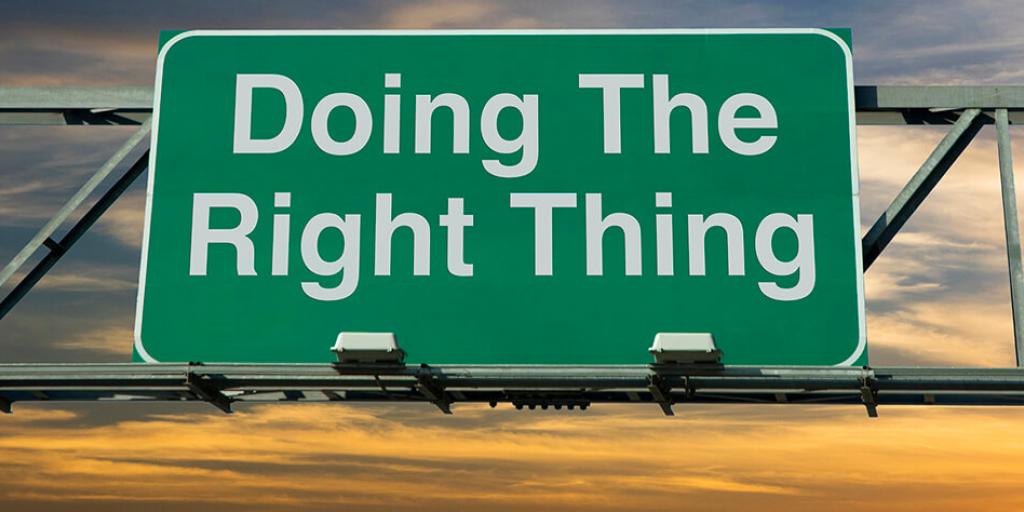 Does your conscience ever bother you? Maybe it should. God's love is defined by the ultimate moral values found in the Bible.

You don’t hear the word “scruples” much anymore. Perhaps too many people have lost their scruples or no longer let scruples affect their actions. Do you have scruples? Where do scruples come from and how do you get them?

A scruple is defined as “a feeling of doubt or hesitation with regard to the morality of a course of action.” Scruples are having qualms, reservations, misgivings or uneasiness about doing something. Conscience is another word for having scruples.

Our conscience, or scruples, is our moral sense or inner voice which guides us about what is right or wrong. It alerts us that some action we are considering is not the right thing to do. Our conscience also produces shame and guilt when we have violated our values.

Hopefully, someone with sound values guided the development of our conscience, instilling in us right principles and standards of conduct. Very early in life we should learn not to take what is not ours, to control our temper, to not retaliate and hit others or call them hurtful names.

Sadly, some do not receive this moral guidance in their formative years, resulting in weak scruples, a weak conscience and a weak character. Sadder still, some abandon their moral upbringing, influenced by society trending in a precipitous downward trajectory.

Who determines what is right and wrong, one may ask? If there is no great authority to regulate standards of human behavior, then truly “anything goes.”

Older folks may remember the song “Anything Goes” by Cole Porter. Many famous singers have recorded the song, though not all with the same lyrics. The original lyrics referenced events, people and scandals occurring around the great depression, how times had changed since the “olden days” but now (in the 1930’s), “anything goes”! Perhaps the song is summed up in the following lyrics: “The world has gone mad today, and good’s bad today, and black’s white today, and day’s night today….” The old values were being abandoned.

But, if Mr. Porter or other people from that era were shocked back then, what would they think if they were alive today and witnessing changes taking place now? They would likely die on the spot of horrific shock!

It is obvious mankind does not have the intelligence or judgment to determine a set of values that will lead to true happiness without harmful consequences. Only a supreme, all-knowing God has such capacity. The Creator God long ago established a way of life and a set of rules, which when followed, leads to joy, happiness, health and prosperity.

With all of the advertising of products we see every day, we are skeptical of anything that sounds too good to be true. Thanks to lawsuits that have taken companies to task, we at least get to know that there are admitted “side effects”—though relegated to the fine print or fast talking announcers at the end of the commercial message.

But the Creator’s rules are simple and straightforward, and without harmful side effects. Following these rules yield true happiness, health and prosperity without harmful consequences. And, as a guide for developing our scruples, our conscience and our values, there is nothing better!

Jesus Christ informs us that we should live by every utterance—every word—that proceeds out of the mouth of God (Matthew 4:4). God spoke the words—in the form of ten commandments—as the broad principles of how to relate to Him and to our fellow human beings.

If you want to develop your scruples on the right principles, read our booklet, The Ten Commandments; and to help you instill sound values in your children, Successful Parenting: God’s Way.