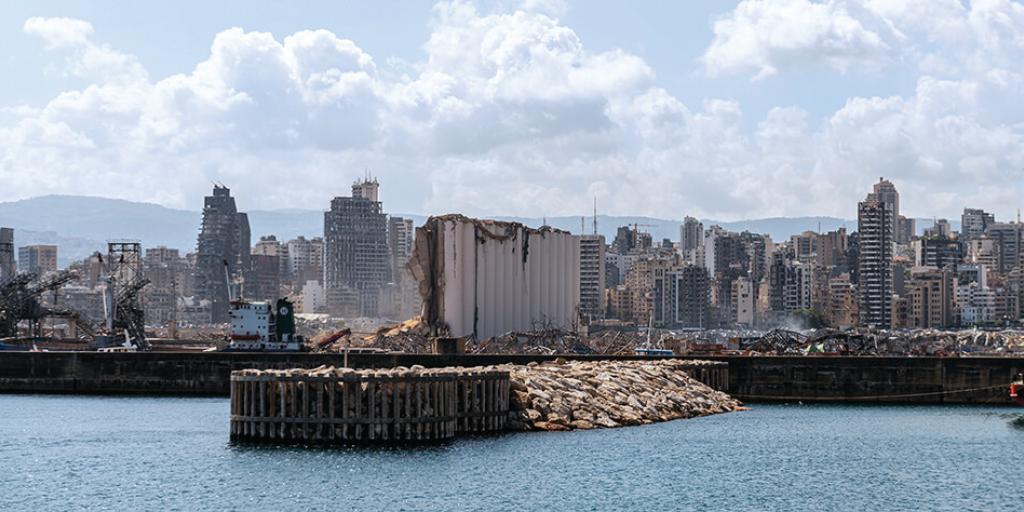 The Beirut Port Explosion—"Gradually, Then Suddenly”

On August 4, 2020, Lebanon suffered one of the worst man-made disasters in its history when a dockside warehouse containing almost 3,000 tons of ammonium nitrate caught fire from a nearby welding accident. The resulting explosion, occurring around 6:00 in the afternoon, leveled the port and devastated surrounding structures. It shattered glass and caused destruction, death, and injury within over a kilometer radius. Noise from the blast was heard as far away as Cyprus, with only a smoking, flooded crater remaining in the middle of Beirut’s port district.

Calamity piled on top of catastrophe as news of the event flooded the media and details came out. The toll of almost 200 dead and thousands injured is tragic enough, but these casualties are only the beginning. Lebanon, already struggling economically and whose people survive on imports and grain stockpiles, lost both in an instant. With the port all but destroyed, shipping was severely impaired, while 85% of the nation’s food reserves were stored right next door to the warehouse that exploded. Pictures and videos showed the large columns of concrete grain silos smashed and strewn like some giant broken pipe organ, with their precious contents spilling into the nearby seawater.

Side by side, two substances associated with life and agriculture—fertilizer and grain—were demolished in an instant when one also became an agent of death.

Ammonium nitrate is the same compound used to enrich fertilizer for soil-nitrogen replenishment and is also very unstable under certain conditions. It is classified as a “low-explosive”—a relative term if there ever was one. Fewer than two tons of it were used in the infamous Oklahoma City bombing, to devastating effect.

A detonation involving 3,000 tons of it, and the mushroom cloud it produced, understandably misled many observers to think a nuclear weapon had been used on the city. Indeed, few today understand the life-changing magnitude of atomic devastation or have experienced these WMDs being used in modern war—or even seen them tested. So, misconceptions are common. But, although it turned out to “just” be an accident, the suffering is no less real or disheartening. One shudders to think of the results if even more explosive material had been involved, or if a nuclear strike had occurred, unlikely as it would be.

But how did it all come about? “Gradually, then suddenly,” to quote a line from Ernest Hemingway’s classic novel The Sun Also Rises.

One analyst commented on Lebanon’s toxic political system and the increasing corruption and bureaucracy that has robbed the country of a promising recovery in the two decades since the Lebanese Civil War (which lasted from 1975–1990): “The port was critical infrastructure in an economy rejuvenating after 15 years of civil war…. The Lebanon that emerged from that rubble is gone, gradually choked by a cynical political class. Yesterday [August 4, 2020], it was finished off” (Faysal Itani, "Why Did Lebanon Let a Bomb-in-Waiting Sit in a Warehouse for 6 Years?" The New York Times, August 5, 2020, emphasis mine).

The ammonium nitrate was the cargo of a ship that was destined for another port, but it became stranded in Beirut for financial and bureaucratic reasons. The captain was ordered to offload the dangerous material. The economic decline and government corruption have given rise to unrest and social disturbance, and it seems that several decades of red tape, “buck-passing,” and general lack of progress left the country vulnerable. Lebanon’s Head of Customs even warned the various agencies in charge about the danger of storing the vast stockpile of explosive materials in the middle of the city, but no action was taken to remove or dispose of it—even despite the fact that Beirut is a known port of call for terrorists moving and storing munitions. All at once, or a little at a time, the pile needed to be taken away for the good of everyone.

So, was the disaster a surprise? Yes, and no.

Certainly, on the streets of Beirut, where life was progressing as normal and just another day was passing, the explosion that rocked Lebanon was a sudden and terrifying surprise. People probably thought a war was starting right then and there. But, because there was no ­pre-action, no spirit to confront the issue before it became an even bigger problem, the nation is now facing a long and painful reaction. Lebanon may never fully recover in this age.

Do you have an “elephant in the room”—an unaddressed “pile of explosives” that years of poor decisions may have allowed to grow too big to remove all at once? Many people do—and so do entire countries, as Lebanon has shown. Lebanon is a tiny country, beset by troubles, and one real physical explosion has now brought it to its knees. How much more, then, can vast, seemingly successful countries with plentiful resources, but a declining moral center, be brought to their knees by physical and spiritual disasters?

The United States and its allies are those countries, and more people now than ever are becoming aware of that disturbing fact. Are you one of them? Will you listen to the words of Jesus Christ when He, speaking to all Christians of every age, warned His disciples about great troubles ahead? "But take heed to yourselves, lest your hearts be weighed down with carousing, drunkenness, and cares of this life, and that Day come on you unexpectedly. For it will come as a snare on all those who dwell on the face of the whole earth" (Luke 21:33–35, emphasis added).

"Sudden destruction" always seems to come unexpectedly, but that doesn't mean you can never know when the conditions for it are growing. The Beirut accident was tragic, but avoidable or not, it was still an accident, and represents nowhere near the level of destruction that actual nuclear weapons can cause. The Bible warns of a time when total destruction will come upon many cities, and that only the return of Jesus Christ will prevent human extinction. Watch the telecast “Hiroshima: 75 Years Later,” and learn the sobering truth—both good and bad—about what has happened and what is yet to come, and what you can do to prepare.

Editor’s Note: As of Monday, August 17, the Lebanese government stepped down facing mass protests against corruption and mishandling of the crisis. Now Beirut faces an even more uncertain future, a condition it tragically shares with many other nations and peoples during this troubling time. Stay up to date on Bible prophecy and what God’s word says will happen in the “latter days,” right here at Tomorrow’s World.