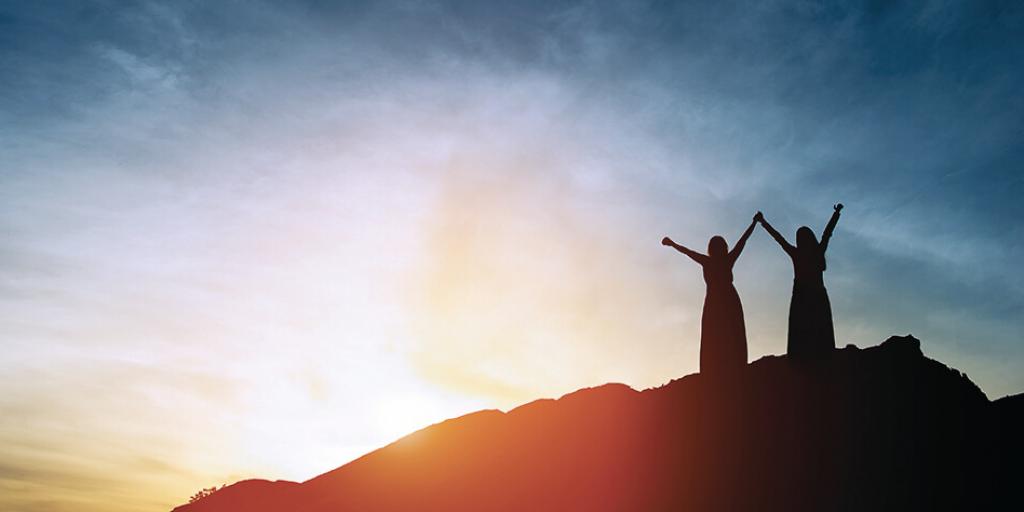 Women of Courage and Fortitude

There have been countless stories down through the ages concerning courage and courageous acts. Some of these accounts are very deeply inspiring and motivating. Many women throughout history have shown great courage.

There are times when women are faced with dire circumstances that are beyond their control and life becomes very difficult for them. In their sorrow and grief, they are sometimes forced to make tough but necessary decisions that require courage and fortitude.

Such was the case for Naomi, whose family moved from Bethlehem-Judah to the country of Moab to escape a famine. While living in Moab, Naomi’s husband Elimelech died and she was left a widow with two sons. Her sons married Moabite women, Orpah and Ruth. Later on, both of Naomi’s sons died as well (Ruth 1:1–5). What a shock it must have been for Naomi to lose all three members of her immediate family in such a short period of time—about ten years (v. 4). So, with courage and fortitude, Naomi had to make some very tough decisions concerning her future.

The only family members she had left there in Moab were her two daughters-in-law, Ruth and Orpah—now widows themselves—with whom she apparently had a very close relationship. These two ladies loved Naomi so much that they wept at the very thought of parting from her as she returned to the land of Judah where she had heard that the Lord was again providing grain for His people. Naomi implored Orpah and Ruth to return to their people in Moab, but they wept all the more. Finally, Orpah sadly turned back toward Moab, but Ruth clung to Naomi and prevailed through her impassioned plea to continue on with her mother-in-law:

Entreat me not to leave you, or to turn back from following after you; for wherever you go, I will go; and wherever you lodge, I will lodge; your people shall be my people, and your God, my God. Where you die, I will die, and there will I be buried. The Lord do so to me, and more also, if anything but death parts you and me (Ruth 1:16–17).

Here, again, is another example of courage and fortitude. Ruth was determined to go with Naomi to seek the true God of Israel—leaving her former gods and her people behind—to serve God and begin a new way of life in a strange land.

Naomi and Ruth must have learned some difficult but valuable lessons during their adversity as they rebuilt their lives, but having the courage and fortitude to see things through, they became stronger women as a result.

Queen Esther also found herself in quite a dilemma when Mordecai, the relative who had raised her as his own daughter after her parents died, informed her of a wicked plot to kill the Jews of the land. He admonished her to go before King Ahasuerus and petition him to deliver the Jews from annihilation. However, she would be opposed by the king’s powerful advisor, Haman, the mastermind of the plot, and would find herself in peril of her life if she even so much as entered Ahasuerus’ presence unbidden. However, her uncle enjoined her to trust that God had put her there for a great purpose—and that if she held back, she would not save herself, even though he had faith God would save her people some other way (Esther 4:13–14).

With courage and fortitude, Esther made a very difficult, gut-wrenching decision.

Then Esther told them to reply to Mordecai:

Go, gather all the Jews who are present in Shushan, and fast for me; neither eat nor drink for three days, night or day. My maids and I will fast likewise. And so I will go to the king, which is against the law; and if I perish, I perish! (Esther 4:15–16).

Then, through a dramatic series of events, with God’s favor and guidance, this gutsy queen was able to expose Haman and his evil plot to King Ahasuerus at just the right time (Esther 7:1–10). King Ahasuerus was so shocked and enraged that Haman would devise such a plot to kill all the Jews—including his own queen—that he took drastic action to deal with Haman, having him hanged on the same gallows that Haman had prepared for Mordecai (Esther 7:10, cf. Proverbs 26:27). God was with Esther from the moment she decided to seek His help through fasting and prayer and to rely on Him for the courage and fortitude that she would need.

I have known of cases where courage was definitely needed, where women endured for a time but eventually failed due to a lack of fortitude. And when courage fails, then hope is lost. Losing hope can result in various negative and destructive emotions and actions such as depression, drug addiction, and even giving up on life. One must hang on to courage and fortitude; it is of the utmost importance!

Fortitude is the key element or component that enables one to see the glimmer of light at the end of the tunnel. It gives the impetus to press on toward the goal—no matter what the circumstances are. The aforementioned ladies certainly had all of these qualities in abundance.

So, with our goal as God’s Kingdom and His righteousness (Matthew 6:33), let us continue to go forward toward this goal of our high calling of God in Christ Jesus with courage and fortitude.

This article is meant as a memorial for the late Faye League, widow of Living Church of God minister Robert League. Mrs. League was a faithful wife, mother, and church member, and also a regular contributor to the Living Church News magazine into the last months of her life. She died earlier this year, at the age of 89. You can find some of her other insights here.