The pursuit of riches often involves sacrifices we would have never expected. 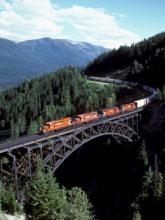 One of the most intriguing and outstanding achievements in Canadian history occurred between 1871 and 1885, within two decades of Canada's confederation in 1867: the construction of the Canadian Pacific Railway (CPR) across the continent uniting eastern Canada with its newest province, British Columbia, on the Pacific coast. Today we take this railway for granted, but at the time it proved the most vigourous, acclaimed and possibly foolhardy venture possible. The late Canadian author, Pierre Burton, wrote possibly the most extensive account of this achievement in his two volume set, The Canadian Dream and The Last Spike (McClelland and Stewart Ltd., Toronto, 1970).