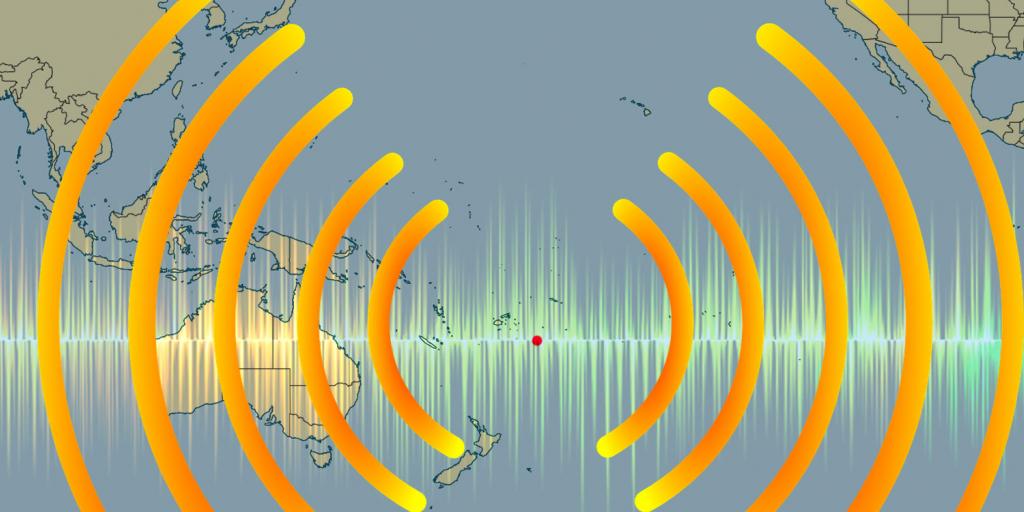 Two weeks ago, the eruption of an underwater volcano off the coast of Tonga sent ash tens of thousands of feet into the sky and tsunami waves across thousands of miles of the Pacific Ocean (New York Times, January 15, 2022). The eruption set off tsunami warnings around the Pacific Rim and along the entire west coast of the United States, where some residents were told to avoid low-lying coastal areas. The “boom” from the eruption was heard 1,430 miles away in New Zealand.

The tsunami wave that hit Tonga’s capital city of Nuku’alofa is estimated to have been four feet high. In Japan, some waves were nearly three meters, around nine feet, high (CNN, January 17, 2022).  In California and Alaska waves were almost four feet high, and in Oregon and Washington they were about a foot high (Forbes, January 15, 2022). The ash cloud reached Australia in a day, preventing some flights from taking off. The volcanic eruption, although under water, was the largest recorded in 30 years. In Tonga, the situation is dire.

Yet, in some ways this eruption was relatively small in its impact compared to similar events in the past. The Sumatran earthquake in 2004 sent a 100-foot-high wave across the Indian Ocean, killing over 230,000 people. The potential damage that can be wrought by earthquakes, volcanic eruptions, and tsunamis can be massive. Within hours, a tsunami multiple meters high could inundate tidal regions around the entire ring of the Pacific, killing millions. Bible prophecy foretells the coming of such events during “the Day of the Lord.” This one-year period of time just before the return of Jesus Christ will bring multiple disasters, including events at sea that will destroy a third of the ships in the ocean (Revelation 8:8–9). This recent eruption and subsequent tsunami provide insight into dramatically greater events that will occur just prior to Christ’s return. To learn more about those events, be sure to watch “The Mysterious Day of the Lord.”