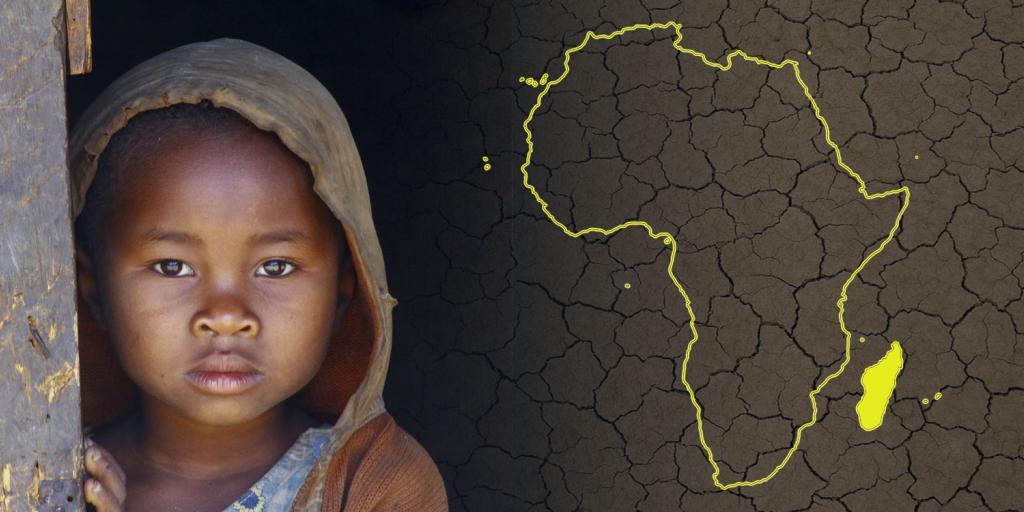 The southern part of Madagascar, an island off Africa’s eastern coast, is in the throes of a severe famine and its worst drought in decades. “1.14 million people are food-insecure [i.e., in danger of lacking enough food] and 400,000 people are headed toward starvation” (Washington Post, July 1, 2021). Due to three years of little rain, winds have swept away productive topsoil. Food shortages are so severe people are scavenging for what they can eat, including unripe cactus, leaves, and the locust that helped bring on the famine. They are even eating ash seasoned with spices and the remains of leather hides used for making shoes (Metro, July 2021). According to the World Food Programme (WFP) Executive Director, “This is enough to bring even the most hardened humanitarian to tears” (UN News, June 23, 2021).

Over the last four months, the number of young children in acute malnutrition has almost doubled. The WFP reported that “41 million people in 43 countries were now teetering on the edge of starvation, with 584,000 already experiencing famine-like conditions across Madagascar, Ethiopia, South Sudan, Nigeria, Burkina Faso and Yemen. This number has increased from 27 million in 2019” (CNN, June 23, 2021). Charitable organizations have warned of a “hunger pandemic.”

As we approach the end of the age, prophecy reveals unprecedented levels of famines in our future, killing an unimaginable number of people (Revelation 6:5–8). As we see more starvation, it will be easy to become calloused to the suffering or just ignore it. However, Jesus felt compassion toward those facing calamity (Matthew 15:32) and promised that those who mourn “will be comforted” (Matthew 5:4). As we look around the globe and in our own nations, will the suffering we see move us to cry out to God, “Thy kingdom come”? Scriptures show many signs will occur that point to the eminent need for the return of Jesus Christ—and spreading famine will be one of those events. Do you know the other signs to watch for that indicate Christ will soon return? To learn more, read or listen to Fourteen Signs Announcing Christ’s Return.