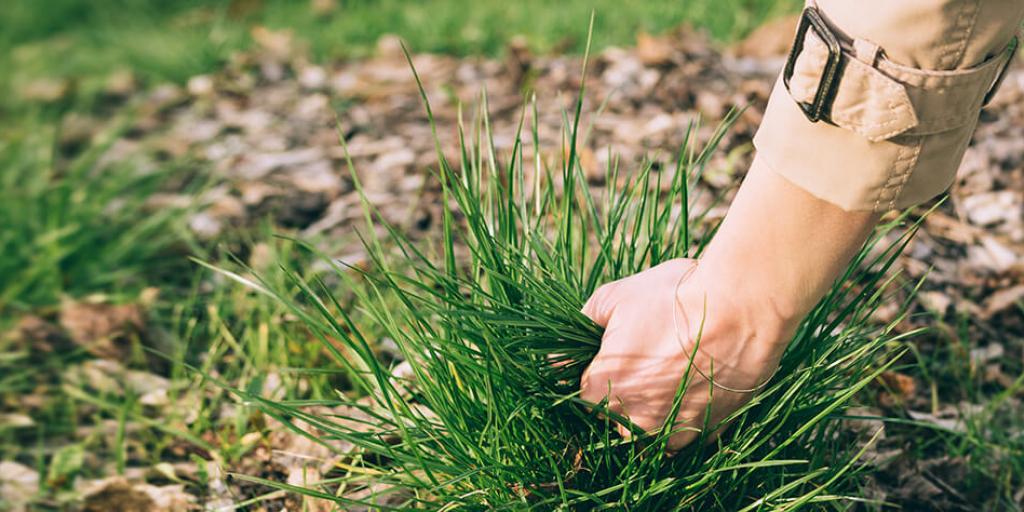 As women, we set either a negative or a positive atmosphere for those around us. When I am distraught, it affects my whole disposition. We all go through difficulties in life and are not completely upbeat all the time. Yet, overall, we should create a positive atmosphere around us that draws people in, starting with our friends and family. I learned a powerful lesson about this from something very close to home—right in my backyard, in fact!

“The wise woman builds her house, but the foolish pulls it down with her hands.” — Proverbs 14:1

Where once my family enjoyed a soft lush lawn, the grass on our property gave way to a stubborn invader called Cudweed. We went from a grassy lawn to groups of tangled stems of Cudweed at every turn. My husband would regularly mow down the weeds, but this led only to there being stiff sprouts poking out of the ground. It was both unsightly and hard to walk on, even when wearing shoes.

The weeds that got mowed down would also grow about ten times faster than the grass in the yard. Two days after the weeds were cut, they sprouted up, healthy and strong, in the fertile ground.

After seeing this happen over and over, I resorted to pulling the weeds out by the root. I had to wrap my fingers tightly around the stems before pulling, because the roots were well-grounded, and it took a considerable amount of effort to uproot them. Occasionally, I would accidentally just tear the stem and leaves off the weed, while the thick, deep root held firmly in place. This meant the plant would grow again and I would have to deal with it again in the future. Without fully pulling out the root, the weed would still flourish. It was just a matter of time until its presence was evident again.

In these cases where the root remained, I would use the shovel to dig them out. Having this newfound experience of weed pulling, the phrase “root of bitterness” in the Bible took on a whole new meaning to me.

“Pursue peace with all men, and holiness, without which no one will see the Lord; looking diligently lest anyone fall short of the grace of God; lest any root of bitterness springing up cause trouble, and by this many become defiled.” — Hebrews 12:14–15

As I thought about the weeds, their roots, and this scripture, I also thought about the times I have been offended or have offended others. It is something that can happen so quickly and is often unintentional. Often, women don’t like to face conflict and hope it just goes away. But, like pulling at just the stem and leaves instead of the root, sometimes feelings of offense can stay. If we do not remove the root of the problem, these offenses can bury themselves deep and become even harder to uproot.

Using a shovel was one way to get the root out quickly and thoroughly. I thought of how God gives us a tool to uproot a root of bitterness towards one another. That tool is forgiveness. Being willing to put aside our own hurt in order to restore the relationship is key. Knowing we are all capable of saying or doing the wrong thing reminds us that we need forgiveness, too. Matthew 6:15 admonishes us to forgive others or else we will not be forgiven.

Another help I had in pulling up the weeds in our yard was rainfall—it was much easier to pull the Cudweed out when the soil was wet! So, I learned to always do weeding after a fresh rain shower! I thought about how the Holy Spirit is likened to water. By God giving Christians this power from Him, we can weed our emotional gardens with much more ease if we are willing to let God help us. Through prayer about forgiving another of an offense, the Holy Spirit will be stirred up to help us in weeding out the stubborn Cudweed of our spiritual lives.

So, ladies remember, if a weed of bitterness does take hold, simply “mowing it down” occasionally will just leave the root, to regrow again and again. We need to go to God and make the effort to uproot any lasting resentment we may be harboring. We need to resolve the hurt within us to be able to create a pleasant ambiance in our homes, at our activities, and at our workplaces. Then we can truly and fully reflect our wise example in Proverbs 14 by building up those around us when we put forth the work in pulling out weeds of bitterness.