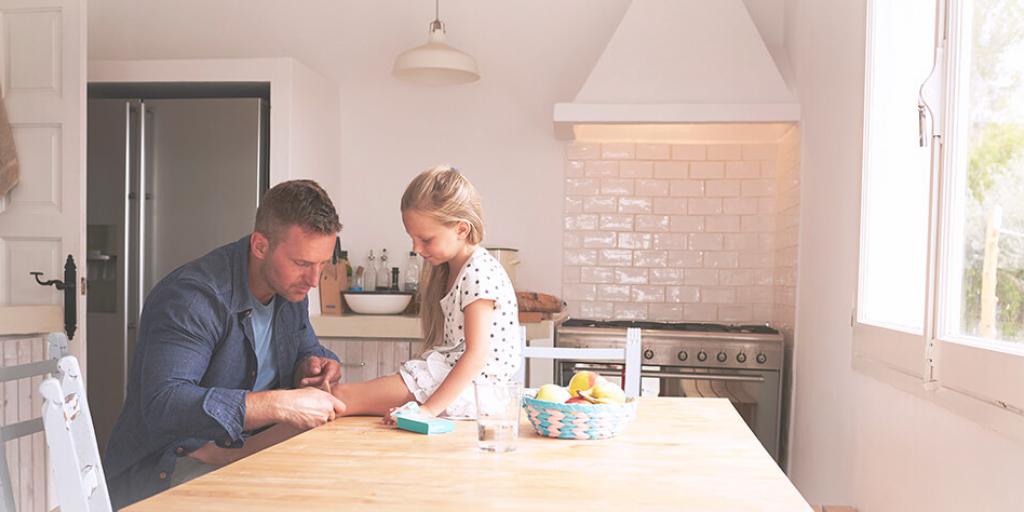 It was silly of me, really. There I was, walking along, running my mouth like a typical teenage girl, not watching where I was going, when all of a sudden, BAM! My shin smacked hard into a big rock in my path. How I missed seeing it, I still don’t know to this day. However, it was from that incident that I learned a very important life lesson.

Striking that rock cut a big gash into my shin, and it bled pretty badly. I cleaned it to make it stop bleeding and then I slapped a bandage on it, to let it heal on its own. And, it probably would have worked, had I not gone canoeing a few days later and spent time standing knee-deep in who knows what kind of polluted water with a fresh wound.

My wound quickly became infected, with a very bad kind of infection. Concerned that I might lose my leg, my father would diligently clean the gash with peroxide every day to get the infection out while I clenched my teeth in pain. Then he would wrap it with a new bandage. His faithful administrations saved my leg—but I still carry that scar.

From a spiritual perspective it can be so easy, when we have felt deeply wounded by others, to bury the hurt—to “slap a bandage on the cut” and not deal with it right away. Eventually we find ourselves knee deep in murky waters that only inflame the wound. Then we have two options: cleanse the infection or risk our eternal salvation.

Young or old, we as Christian women must realize that we can have a special influence over the people in our lives: husbands, children, family members, friends or co-workers. Just read Proverbs and see how many times Solomon mentions a contentious woman (Proverbs 21:9, 19; 25:24; 27:15). Twice he says it is better to live in the corner of a roof than with a contentious woman. Such a woman likes to argue, enjoys creating strife and finds pleasure in being quarrelsome and a complainer—all symptoms of the start of bitterness. This is not a pretty picture. Think of how important it should be, then, to deal with offenses head-on, before bitterness and hatred have a chance to fester. When we let bitterness seep into our words, or hatred reflect through our actions, others are watching and they are being affected.

How many verses are there about being careful with whom we associate ourselves? Perhaps 1 Corinthians 15:33 says it best: “Evil company corrupts good habits.” I do not want my infected words or actions to negatively affect my spiritual brother or sister.

Thankfully, God gives us an easy method in handling offenses before infection sets in. “If your brother sins against you, go and tell him his fault between you and him alone. If he hears you, you have gained your brother” (Matthew 18:15). God wants us to go to our brother or sister who offended us and work out our differences, not hold in our hurt feelings, burying them so deep that hatred and a root of incurable bitterness grows in our hearts (Hebrews 12:15).

Cleaning my infected wound was quite painful but very necessary. Similarly, spiritual cleansing comes in the form of correction from our loving Father, Who only wants us to grow in His very character. “Now no chastening seems to be joyful for the present, but painful; nevertheless, afterward it yields the peaceable fruit of righteousness to those who have been trained by it” (Hebrews 12:11).

I should have been careful when I was walking that day. I should have been paying attention or else I would not have tripped over that rock. In the same way, I need to be careful in my daily life to pay attention to my actions so that I don’t cause offense to my brothers and sisters. The principle of the Golden Rule, “Do unto others as you would have them do unto you,” really is the principle of giving to others, both in what we say and do, and what we do not allow ourselves to say and do.

The scar on my leg has faded through the years, but it serves as a reminder that correctly dealing with wounds right away can save a whole lot of pain!