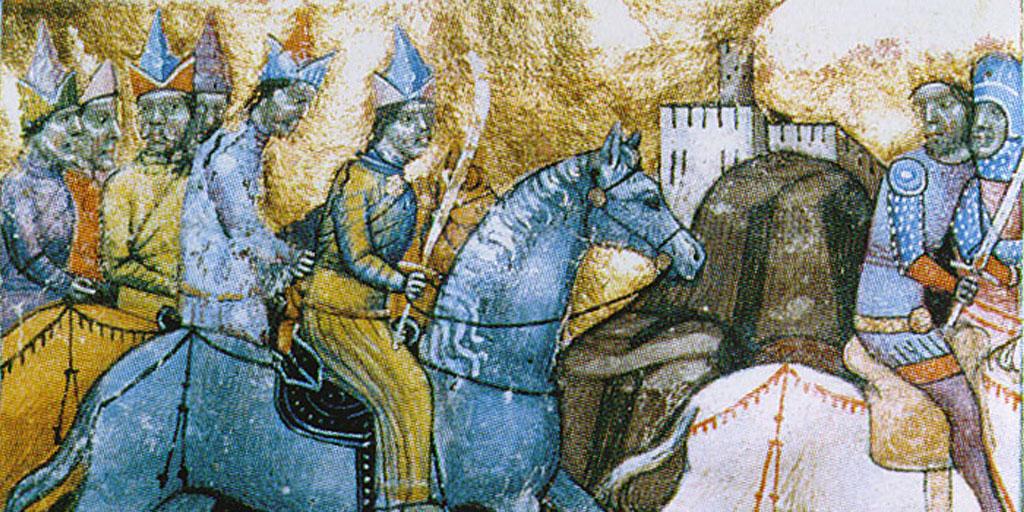 April 10, 1241 has haunted the European collective consciousness for centuries. World history would have been very different had the Tartars not abruptly halted their furious advance into the heart of Europe. Why did the Tartars stop? Why was Europe spared? Will a great eastern army again advance on European powers? Will Europe escape a second time?

After destroying the mighty Polish-German army of knights on April 9, 1241, the Mongols decapitated Heinrich II and carried his head as a trophy before them. Only the Hungarian army remained to defend the rich farmlands and helpless villages of interior Europe. Moving quickly, the Tartars overwhelmed and defeated the Hungarians. The date was April 10, 1241. Europe was prostrate before the Mongol and Turkish armies. But abruptly, Europe was spared.

These were the proud and mighty troops of the Great Khans, gathered from many Asian nations. Conquered Russians, Slavs and others were also conscripted into their armies.

Writing in 1245, Thomas of Spalato described the Mongol warriors' terrible advance. "They have terrifying facial expressions and short legs, but broad chests and wide faces, their skin pale; they have beardless chins, crooked noses, narrow wide-set eyes. The Tartars ride like farmers on small, but strong, horses that are used to deprivation and physical exertion. These animals gallop without horseshoes over rocks and stony ground as if they were mountain goats. Even when they are ridden three days straight, they are satisfied with just a little straw as food. The Tartars themselves are similarly Spartan. They hardly bother about food, but subsist on their cruelty alone."

Only the unexpected death of the Great Khan Ögödei caused the Mongols to abruptly withdraw from Europe and return to their Imperial capital at Karakorum. It was not yet time for God to allow great Asian armies to strike a supreme blow against Europe. However, Scripture foretells of a future and more violent clash between European and eastern Armies.

At the end of the age, a final and sacrilegious Beast power, heir to both the Eastern and Western Roman Empires, will arise. This European federation of ten nations will terrorize the world (Revelation 17). But at the height of the Beast's power, it will be incited by military intelligence from eastern and northern nations (Daniel 11:44). This will provoke the Europeans to preemptively attack the Asian and Russian military combine, which will strike back. These ferocious attacks and counter-attacks will cause the nuclear destruction of much of Europe, including Rome itself (Revelation 9; 18:9–10).

In its death throes, the Beast power will turn on the very religious institution which had condoned and participated in its hellish atrocities (Revelation 17:16). Only Christ's return as King of kings will save the earth (Matthew 24:22, Revelation 19:16–21)!

What have been some more recent developments in these areas? Recently, Russia has been building new-generation “hypersonic” nuclear-capable cruise missiles (Independent.co.uk, March 11, 2018). Russia and China have continued joint military exercises, mobilizing squadrons of combat aircraft, warships and thousands of troops (UPI, August 21, 2015). And, the Pentagon continues to worry and warn about accelerating Chinese military buildup (New York Times, January 19, 2018).

Europe would be well-served to remember 1241. Europe would be even better served to consider Christ's warning to "Come out of her, my people, lest you share in her sins, and lest you receive of her plagues" (Revelation 18:4).

Read the Tomorrow's World articles "What's Ahead for Russia?" and "The Final Crusade?" for more insight into how this final confrontation will lead to Christ's return as King of kings. These events will shake our world. But you don't have to be fearful if you are willing to put your life in Christ's hands through obedience to Him, so He can protect you during the times to come and reward you at His return (Luke 12:31–32, Revelation 3:10). To more fully understand, please study What Is a True Christian?