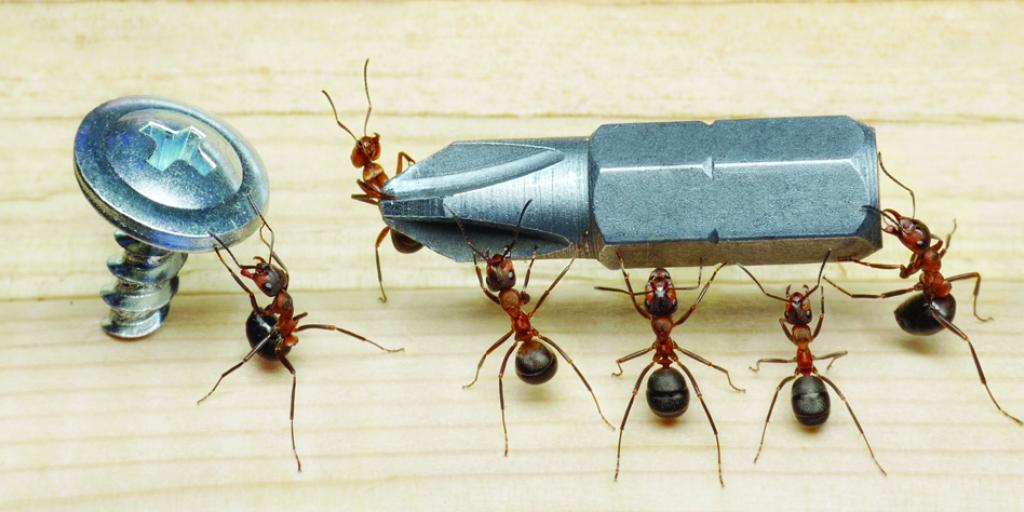 Did you ever sit and watch ants scurrying about? They are tiny creatures and most of us regard them as nothing but pests. We certainly do not invite them to our picnics or into our homes. Did these tiny insects evolve, or were they created by a brilliant Designer?

Nobody would ever accuse an ant of being lazy. While bees get the credit in proverbs and fables for being busy, you have to give at least honorable mention to the lowly ant. Each tiny ant is busy with activity, whether searching for food, carrying it back to the hive, constructing the hive, defending the hive or serving the needs of the hive—and all with no supervision.

An article in ScienceDaily once caught my eye. Scientists are always looking for a better way to do things. Often that means looking to the marvels of Nature, which I prefer to call “the Creation” since it was made by the Creator. The article discusses studies to determine if traditional material handling technologies can be improved.

Scientists at the Fraunhofer Institute for Material Flow and Logistics IML in Dortmund, Germany, instead of traditional material handling methods, have devised algorithms for the control programs of autonomous material handling shuttles based on ant behaviors. Similar to ants carrying food (material) to the hive, driverless shuttles coordinate with one another, retrieving and moving goods in the research facility’s replicated, small-scale distribution warehouse. The ant’s swarming and “material handling” abilities are the model.

Protecting computer networks from intrusion is a continual battle. The lowly ant is featured again in another Science Daily article. Traditional threat detection tries to protect from all threats at all times which uses considerable computing resources. Security experts are utilizing new security measures based on ants’ “swarm intelligence.” An individual ant encountering a threat communicates to other ants by chemical scents. In moments, this communication brings many defenders to deal with the threat. The new security programs copy this technique. When a “digital ant” detects a threat—a computer virus or worm—it leaves a digital trail that attracts other digital ants, which mark the potential threat for human operators to examine.

An article in this issue of The American Naturalist discusses scientists examining the question of whether social insects, like the ant (or bees and termites) can efficiently distribute tasks among the workers. Social insects perform their work without central control but have a “division of labor” for various tasks. Worker ants are able to weigh the importance of each task, which improves efficiency. The scientists were amazed to discover that the insect model was like an artificial neural network used to control robots. It was a very complex model with many variables.

There are thousands of varieties of ants that are found all over the world. These marvelous creatures communicate by secreting pheromones and detecting them by their antennae. Ant nests are engineered in the ground, in logs, in trees and rocks, or out of plant materials, depending on the ant variety. Ants collectively solve problems and work to perform such feats as forming a chain to bridge gaps, or to use various mechanisms to defend their nest from competitors or predators.

Ants have inspired stories and proverbs that extol their virtues of cooperation and industry.

The lowly ant is mentioned in the Bible proverb: “Go to the ant, you sluggard! Consider her ways and be wise, which, having no captain, overseer or ruler, provides her supplies in the summer, and gathers her food in the harvest” (Proverbs 6:6–8).

Did these tiny marvels—or any other life form, including humans—come by their abilities through “natural selection” and evolution? Or were they the product of great thought, careful planning and intricate design work by a Creator? Order your free copy of The Real God: Proofs and Promises, and do not forget to watch the telecast “Rethinking Darwin” and the webcast “Homo Naledi and the ‘Science’ of Human Origins” today.