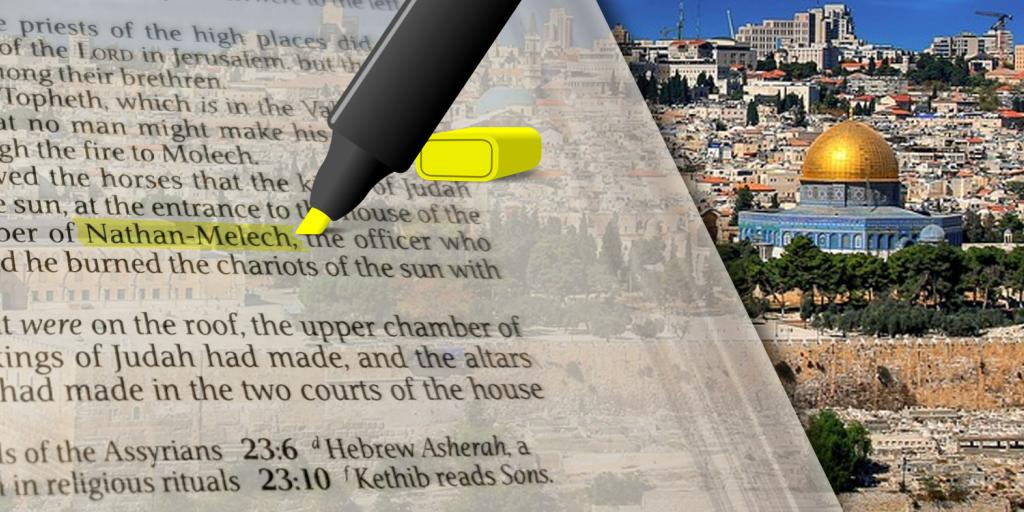 More Proof of the Bible!

According to the Jerusalem Post, archaeologists from the University of Jerusalem recently unearthed a seal from the City of David bearing the inscription “(belonging) to Nathan-Melech, Servant of the King” (April 1, 2019). The seal is estimated to be about 2,600 years old and dates back to the time of King Josiah of Judah. In fact, Nathan-Melech was the name of “the officer who was in the court”—possibly the court outside the king’s royal stables (2 Kings 23:11).

Although archaeologists are not certain whether this Nathan-Melech is the one mentioned in the Bible, other recent discoveries help to make this connection. The Post reports, “The clay bulla (seal impression), along with other artifacts, was discovered inside a public building that was destroyed during the destruction of the First Temple and was uncovered during the archaeological excavation of the Givati parking lot in the City of David National Park in Jerusalem.” Other seals have also been found with the names of men who were contemporaries of Nathan-Melech.

While critics continue to challenge the validity of the Bible, archaeological evidence continues to emerge that supports the Bible’s historical record, as it has for centuries. Yet, these new discoveries are seldom mentioned in the popular press. As a result, many assume the ideas of critics—that the Bible is not historically accurate—are true.  The Apostle Paul warned about the “ungodliness and unrighteousness of men, who suppress [hold back] the truth in unrighteousness” and that such misguided actions lead to other serious social problems that would eventually bring about the “wrath of God” (Romans 1:18–32)—problems that fill the whole world in the last days (2 Timothy 3:1–5). However, there is good news: The day is coming when all mankind will recognize the great God for who He is (Ezekiel 5:13; 6:14; 7:4, 27), that the Bible is true from cover to cover (Psalm 119:160), and that “All Scripture is given by inspiration of God” (2 Timothy 3:16). For greater insight into the accuracy of the Bible, read or listen to The Bible: Fact or Fiction?