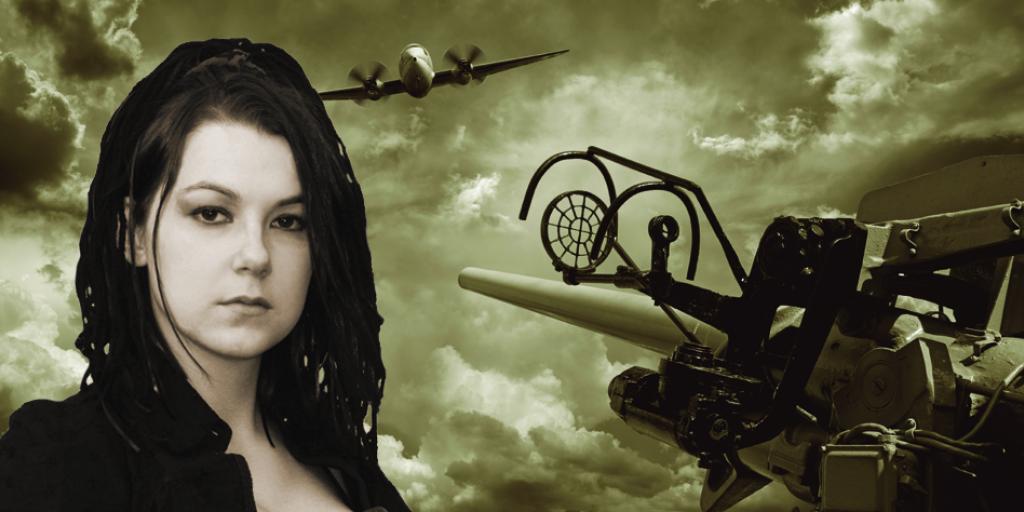 I was a child growing up during the war when our county in the southeastern corner of England, only 21 miles from France, became known as “bomb alley.” The first German raid on London took place around 4:00 p.m. on September 7, 1940. The German Luftwaffe made a blitzkrieg attack, sending 348 bombers escorted by 617 fighters over the Channel from France. London’s docks and streets were bombed for 57 days and a third of the capital was destroyed.

The frightening banshee wail of the sirens eerily announced each attack. Soon we would hear the heavy drone of Heinkel 111 bombers. This would be closely followed by the answering “womp-womp” of antiaircraft guns. Few could sleep. Barrage balloons hung everywhere in an attempt to cause the German planes to fly higher and so miss their targets.

Many evenings at 9:00 p.m. people would huddle around their radios to hear Winston Churchill rallying the British people, his own bulldog-like stature epitomizing the determination to never give in. Blackout after dusk was rigorously enforced. Food was rationed and people were encouraged to “dig for victory.” However, had it not been for the courageous sailors who braved the German U-boat packs in the Atlantic, bringing generous aid from America, Britain would undoubtedly have been starved out.

Since all eligible men were called into military service, older men served in the Home Guard or did other duties. The absence of men inevitably left a vacuum, which only women could fill.

Women joined the Land Army. They drove tractors, harrowed, planted and reaped the crops. Others worked in munitions factories, drove ambulances etc. and elderly schoolmistresses kept the schools running for the children who came carrying their obligatory gas masks.

At that time it was God’s will to give the victory to the Allies, but men nevertheless had to fight and often die for freedom. In that great battle women too were part of the equation.

But, what has all that to do with us?

Before Jesus Christ ascended into heaven He gave His Church a commission: to preach the Gospel into the entire world as a witness and to teach and baptize those whom God is calling. So we who are unique “called-out” ones (not “called-up” ones) have a big job to do.

Perhaps as women we unconsciously think of this as men’s work. After all, it’s men who make the telecasts, do the preaching, baptizing and counseling etc. But as Dr. Meredith has stated: we are at war. It’s a case of “all hands on deck”—and that means Christian women too.

Since we live in a world currently under Satan’s influence, our adversary naturally doesn’t want the Gospel of truth being preached when he is busy and successfully deceiving all the nations (Revelation 12:9).

Therefore this “little flock” (Luke 12:32) has a titanic job to do—a job that can only truly be accomplished by God’s Spirit. Nevertheless, we all have our part to play, no matter how small.

Although this 21st century is a very different world to that time, we still have a veritable army of dedicated ladies tirelessly working in Church offices around the world. Ministers’ wives go visiting with their husbands. Younger women teach their children the value of following God’s way. But, what about the rest of us? What can we do?

In particular, we can pray. Pray in a refined “beaten fine” manner about every detail of God’s Work and His people (Revelation 5:8). As we have often heard, the Work of God’s Church moves forward on its knees. We must not underestimate the value of prayer!

We can also stay in touch with new lady members and maybe answer their questions. We can phone, write letters or send e-mails to those who are sick or going through trials, giving encouragement and comfort.

We can be hospitable in our homes (health allowing) or prepare food for the Holy Days and after Sabbath services. We are all part of the Body of Christ and each of us has a part to play. We are engaged in a mighty battle to get this Work done before the return of Jesus Christ.

However, unlike the Allies in WWII who were never completely sure of the outcome, we know we are on the winning side. Jesus Christ will return and then some words from a famous WWII song will be truly realized:

“There’ll be bluebirds over

The white cliffs of Dover

Tomorrow, just you wait and see,

There’ll be love and laughter

And peace ever after

Tomorrow, when the world is free.”