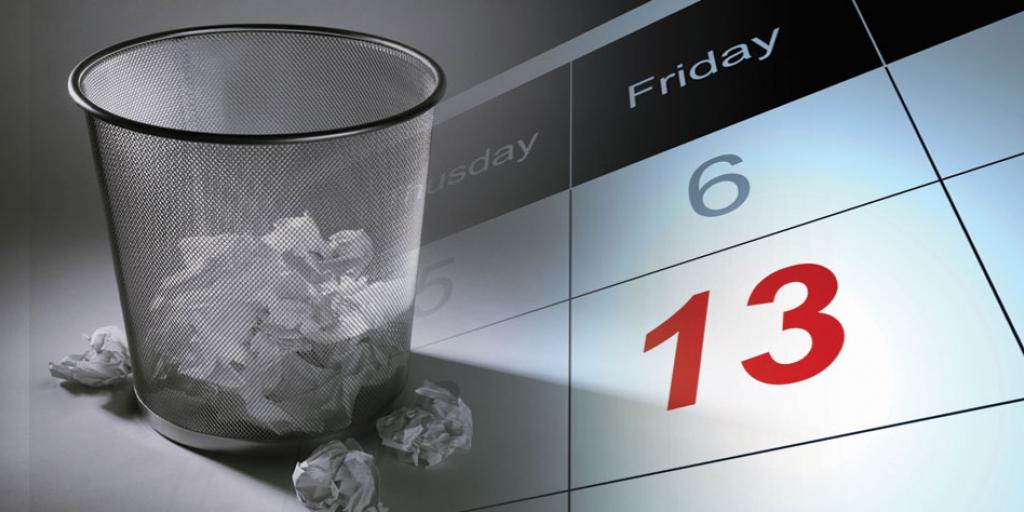 Are you suffering from paraskavedekatriaphobia? Or maybe triskaidekaphobia? What does Friday the 13th mean to you?

Is Friday the 13th a day when you expect "bad luck"? Is it a time to indulge in superstitious behavior "just in case" it might protect you from bad things that could happen? Is it an excuse to turn your mind toward unhealthy themes that run through our popular culture? Or can it be an occasion to reflect on the true facts behind man-made myths and legends?

Millions are superstitious enough about the day that business analysts have documented Friday the 13th-related reductions in activity. "It's been estimated that [U.S] $800 or $900 million is lost in business on this day because people will not fly or do business they would normally do," said Donald Dossey, founder of the Stress Management Center and Phobia Institute in Asheville, North Carolina.

To the entertainment industry and millions of moviegoers, Friday the 13th is an auspicious occasion for movies with a "horror" or "occult" theme. In February of 2009, Friday the 13th, saw the release of Friday the 13th, a "reboot" of the grisly 1980 horror film that made Jason Voorhees a household name to "slasher movie" fans. A month later, Friday the 13th marked the release of Walt Disney Pictures' Race to Witch Mountain, starring Dwayne Johnson and AnnaSophia Robb. Movies like these, though their producers may want you to think of them as harmless fun, or even as innocent family fare, are not what the Apostle Paul had in mind in Philippians 4:8; rather, they too often turn viewers' attention away from true values and the development of Christian character.

What are the origins of the idea that Friday the 13th is a time of bad luck and evil? The number 13 has been the subject of superstition and fear for thousands of years; the Code of Hammurabi, a set of Babylonian laws commonly dated to the 18th century BC, includes a twelfth law and a fourteenth law, but no thirteenth! The ancient origin of this superstition is obscure but, to this day, hotels, office buildings, airport departure gates and many other public places go out of their way to avoid using the number 13. Of course, if you are truly superstitious, you will quickly figure out that the floor, room or gate numbered "14" is nevertheless still the 13th!

But what about the origin of the "Friday" part of the superstition? Compared to the millennia-old fear of 13, widespread fear of Friday the 13th appears to be much more recent. It was especially popularized in 1907 when Boston stockbroker Thomas Lawson published a book titled Friday, the Thirteenth, the story of a venal businessman's attempt to crash the stock market on the "bad luck" day of the month. How did Wall Street react? The book sold well, and in 1916 it was turned into a feature-length silent film.

Since then, people have looked back into history to find examples and facts that seem to justify their fears of Friday the 13th. It is said that on Friday, October 13, 1307, King Philip IV of France tortured several hundred monks until they confessed to various heretical beliefs. Certainly, as on any other day, tragic events have occurred on Friday the 13th. On July 13, 1951, floodwaters crested in many parts of Kansas, during the "Great Flood" that ravaged more than 2 million acres of land and caused more than three-quarters of a billion dollars in damage. A March 13, 1992 earthquake in Turkey killed 2,000 and left 50,000 homeless. Just last month, the Flight 3407 commuter turboprop crash near Buffalo, New York caused 50 deaths and fueled some people's paraskavedekatriaphobia (defined as "fear of Friday the 13th"—mere fear of the number 13 is known as triskaidekaphobia).

Few today remember that Charles Ponzi, eponymous creator of the "Ponzi scheme" fraud, was sent to jail on a Friday the 13th in August 1920. Interestingly, Bernard Madoff, whom prosecutors accuse of perpetrating the largest Ponzi scheme in U.S. history (with victims alleging losses of $50 billion or more) missed by one day a repeat of Ponzi's legacy when his bail was revoked after a guilty plea and he was sent to jail on Thursday, March 12, 2009.

Fearful and superstitious people have suggested many other events as evidence of Friday the 13th bad luck. Some even mistakenly assume that Jesus Christ was crucified on a Friday the 13th, though serious Bible students know that His crucifixion took place on a Wednesday, not a Friday. The list could go on.

But is Friday the 13th really an unlucky day, when people are more likely to have bad things happen to them? A 2008 study by the Dutch Centre for Insurance Statistics found that when the 13th of the month falls on a Friday, that day is actually safer than other Fridays! "I find it hard to believe that it is because people are preventatively more careful or just stay home, but statistically speaking, driving is a little bit safer on Friday 13th," said statistician Alex Hoen, who participated in the study.

There is no reason for Christians—or for anyone—to fear Friday the 13th, or to succumb to the superstitions that surround the day. Read our articles "Fear, Frustration or Faith?" and "Dangers of the Occult" to gain a new perspective that can bring you a peace and confidence you never had before.