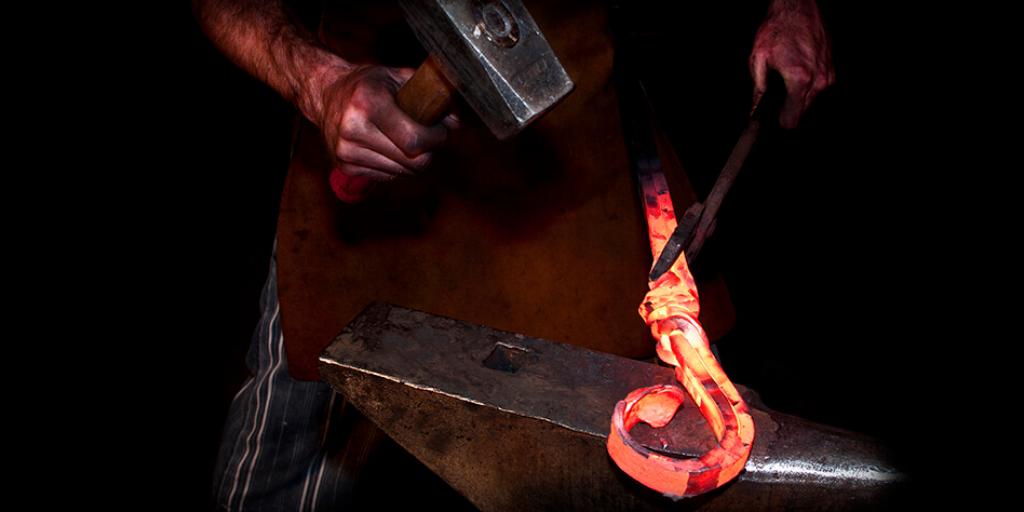 When I was a youngster, we lived close to a blacksmith’s shop. The smith was a man trained to take a piece of metal, heat it, beat it, and cool it—thereby producing needed and useful articles. His tools were simple, his strength was great, and his eye was keen. The blacksmith’s implements were few: a hammer, anvil, and forge. His forge was used to produce heat; his anvil was a large piece of solid metal to pound on with the hammer. He performed a vital service for the local community, and what he taught us remains relevant today.

The process of making good metal products is much the same as the process to make good character. One is a physical process and one is a spiritual process. The “materials” being fashioned are different, but the process is very similar. Blacksmithing makes a perfect biblical analogy.

The Apostle Paul told Christians in Corinth: “Now if anyone builds on this foundation with gold, silver, precious stones, wood, hay, straw, each one’s work will become clear; for the Day will declare it, because it will be revealed by fire; and the fire will test each one’s work, of what sort it is” (1 Corinthians 3:12–13).

The foundation being described here is character, and the materials Paul mentions portray qualities ranging from the best to the poorest. Good character, like gold, can be tried, but it will remain pure and untarnished. Poor character, however, like straw, will not stand the heat.

Hardships like illness, death, job losses, family problems, and persecutions can be “fiery trials” that test our character (1 Peter 4:12–13). How we behave under the heat and pressure of our trials determines our character. To build character acceptable to God, we must be tested and tried. Consider the biblical account of Job, a wealthy man who was a good father and acknowledged God, but who in his self-righteousness took pride in his accomplishments. God gave Satan permission to strip Job of his earthly possessions (Job 1:12), and later to afflict him with physical disease and other suffering.

Job needed to learn a lesson, and by the end of the book that bears his name, he had undergone a change in attitude: “I have heard of You by the hearing of the ear, but now my eye sees You” (Job 42:5). Job learned to take a more realistic and humble view of himself and grew to trust God as he had not done before.

In our own ways, we all go through versions of Job’s experience. As we do, God wants us to understand that our trials are opportunities to build holy and righteous character through the ways we respond.  No one is exempt; God even uses “fiery trials” to test the character and faith of His servants in dramatic ways. In the book of Revelation, the Apostle John presents the analogy of refined gold to admonish His servants who were “lukewarm” and who were not “on fire” for His Work: “I counsel you to buy from Me gold refined in the fire, that you may be rich; and white garments, that you may be clothed, that the shame of your nakedness may not be revealed; and anoint your eyes with eye salve, that you may see” (Revelation 3:18).

The blacksmith of bygone days forged tools that would endure. God uses a similar process to build character in His servants. The Bible describes the soon-coming Kingdom of God, in which today’s Christians—having had their character refined through trials and tests throughout their lives—will rule under Jesus Christ as Spirit beings. This refinement will have brought about not just endurance, but also beauty: “For You, O God, have tested us; You have refined us as silver is refined.... You laid affliction on our backs.... we went through fire and through water; but You brought us out to rich fulfillment” (Psalm 66:8–12).

God is refining servants by teaching them His Way of life.

You can partake of that Way, and find hope. Learn more by reading the free booklets Restoring Original Christianity and What Is a True Christian? You can read them online, download them, or order your own printed copies. Also be sure to watch "Hope in Tough Times," right here at Tomorrow's World.