In Kingston, Ontario, at the old Cataraqui Cemetery, one could miss an unpretentious granite marker engraved with a simple inscription: John Alexander MacDonald, 1815–1891, At Rest.

One would not suspect that this grave contains the remains of one of the great driving forces behind the creation of the Dominion of Canada. MacDonald was a talented, hard-working visionary who left two great legacies—the unification of British colonies in northeastern North America into a single nation, and the expansion of this union across the continent to the Pacific and Arctic Oceans.

MacDonald was born in Glasgow, Scotland in January 1815. Five years later, his parents left for Kingston, located in what was then Upper Canada. His ability was considerable, and he was selected to article for a local law firm at the age of 15. At 20, he was inducted into the Law Society of Upper Canada. In those early days, his political views were somewhat shaped by a brief rebellion in Upper Canada, influenced and to some extent supported by republican sentiment south of the border. While he helped subdue the rebellion, he also defended some of the rebels, building his reputation as a defence lawyer.

In the 1840s MacDonald won a seat in the Upper Canada legislature. By 1854 he became Premier. MacDonald continued his law practice throughout his political career. While rigorously defending the right of an individual to voice a dissenting opinion, MacDonald sought opportunities to create workable coalitions of people, political parties and businesses to achieve big ideas. “MacDonald would be bold enough to make tough decisions and sensible enough to submerge his own ego to support a cause” (“Canada’s Patriot Statesman,” Library and Archives Canada). In a land with a strong English-French divide, MacDonald, who spoke French, built partnerships with French Canada—and notably with “Father of Confederation” George Etienne Cartier—uniting two peoples in a common vision.

Seeing big solutions and making them reality took great skill and wisdom, but also humility and the ability to inspire. There is a story told by former Prime Minister John Turner that illustrates this quality of MacDonald:

David Thompson, a Liberal Member of Parliament (MP)… had just returned to Parliament after an extended absence due to illness.… Thompson reported that: “The first man I met was [Liberal leader Edward] Blake; he passed me with a simple nod as if he had forgotten I was away. Then I met [Liberal MP Richard] Cartwright, who was just as cold. Then I met Sir John, who rushed across the Chamber, slapped me on the shoulder, grasped my hand, and said, ‘Davy, I am glad you are back again; I hope you will live many a day to vote against me.’ It was pretty hard not to follow a man like that” (ibid.).

Following the 1864 U.S. election, the Republicans, to placate Irish Americans, put forward the Canada Annexation Bill in July of 1866. Fear of annexation by the U.S. was the greatest single factor that enabled MacDonald and his allies to bring about a consensus for union.

Consequently in 1866, the British parliament passed the British North America Act, much of which MacDonald drafted. July 1, 1867 was selected as the date on which the Dominion of Canada would be born. MacDonald was the obvious choice to become the first prime minister. Many challenges lay ahead, but his vision, patience and willingness to respect other opinions enabled him to be a unifying force.

MacDonald now focused on the expansion of Confederation westward to the Pacific. He led the task of bringing the province of Manitoba into existence (1870), followed by the addition of British Columbia (1871). The latter required the promise of a transcontinental railway, the greatest single project ever undertaken by the Canadian government, requiring massive funding. In the process MacDonald and his government were caught up in a major financial scandal resulting in his government’s defeat in 1873. Yet in 1878 he returned. The populace sought a visionary with a record of delivery. MacDonald went on to win four consecutive elections, stabilizing the young nation. He believed in a strong central government willing to spend on national interest projects. He oversaw the development of a national police force that would become the Royal Canadian Mounted Police, to bring order to the West. He was faced with a national crisis when a rebellion occurred in the North West. These challenges required firmness and balance.

In all of this, MacDonald endured many personal trials. His first child died at 13 months, and his first wife (Isabella), became afflicted with a debilitating disease that took her life 13 years later. MacDonald, shaken by these events, had been a loyal husband and loving father. Ten years later he married again. He deeply loved his new wife, Susan Anges, but they were soon devastated when their daughter was born severely handicapped. He made every effort to be with his family members as much as possible.

Adele Perry in “The Mounted Police and Prairie Society 1873–1919” writes: “While Prime Minister MacDonald was confronted with the illness of his wife, personal financial crises and many pressing problems of the nation, he delayed the formal approval of a western police force until the time was right. This caused Commissioner Irvine of the North West Mounted Police, whose operations were delayed awaiting approval, to refer to MacDonald as ‘Old Tomorrow’” (p. 8).The nickname stuck!

It was characteristic of MacDonald to evade difficult issues until the right moment for success. History underscores the wisdom of waiting to implement policies until needs are identified. In the end, he achieved nearly all of his visions. Canadian Senator Hugh Segal writes of MacDonald, “He could always build a coalition on an issue that mattered… That was his most compelling success. There’s a point in any partisan debate where you’ve got to stand back and realize there is something more… and that is loyalty to your country” (“Canada’s Patriot Statesman,” Library and Archives Canada).

“Old Tomorrow” gave a young nation vision and focused leadership. MacDonald was not without faults and weaknesses, but lack of love of country and family were not among them. Sincerity, vision, teambuilding, determination and integrity are what God is looking for in His future leaders—those who are willing to work on perfecting their own character and supporting the announcement of God’s coming rule on the earth, while waiting for Him to select the right moment to restore righteous government to all the world. This can be your destiny—in Tomorrow’s World. 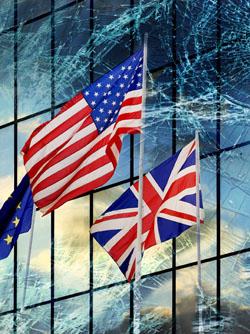