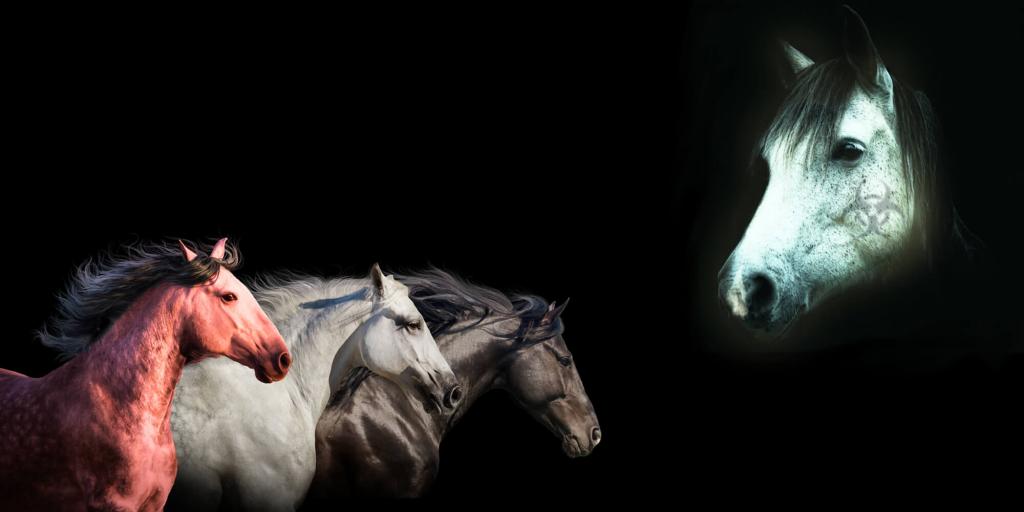 Is COVID-19 a Sign of the Four Horsemen of the Apocalypse?

COVID-19—perhaps no event has so universally affected the globe since World War II. According to a July 21, 2021 article by U.S. News & World Report, only 14 countries out of the 197 in the world haven’t reported a COVID-19 case, and twelve of those are small island nations. It is a worldwide crisis that has likely sparked a variety of questions in the minds of Bible readers, especially questions related to the book of Revelation. Of the catastrophic events recorded in Revelation, such as those of the seven seals (Revelation 5–8), seven trumpets (Revelation 8–11), and seven bowl plagues (Revelation 15–16), the most well-known prophecy is likely that of the “Four Horsemen of the Apocalypse.” As the COVID-19 pandemic gallops on, let’s consider this specific question: Is COVID-19 a sign that the Four Horsemen have started their end-time ride?

Now I saw when the Lamb opened one of the seals; and I heard one of the four living creatures saying with a voice like thunder, “Come and see.” And I looked, and behold, a white horse. He who sat on it had a bow; and a crown was given to him, and he went out conquering and to conquer. When He opened the second seal, I heard the second living creature saying, “Come and see.” Another horse, fiery red, went out. And it was granted to the one who sat on it to take peace from the earth, and that people should kill one another; and there was given to him a great sword. When He opened the third seal, I heard the third living creature say, “Come and see.” So I looked, and behold, a black horse, and he who sat on it had a pair of scales in his hand. And I heard a voice in the midst of the four living creatures saying, “A quart of wheat for a denarius, and three quarts of barley for a denarius; and do not harm the oil and the wine.” When He opened the fourth seal, I heard the voice of the fourth living creature saying, “Come and see.” So I looked, and behold, a pale horse. And the name of him who sat on it was Death, and Hades followed with him. And power was given to them over a fourth of the earth, to kill with sword, with hunger, with death, and by the beasts of the earth.

In Jesus’ famous Olivet Prophecy, in which He explained the events that would occur at the end of the age leading up to His second coming, He also explained the symbolism of the Four Horsemen (Matthew 24:3–8):

Perhaps the pale horse represents COVID-19, as some may claim? Merriam-Webster.com defines pestilence as “a contagious or infectious epidemic disease that is virulent and devastating.” That sounds a lot like COVID-19. Can we know for sure?

Verse 8 provides an important clue. It says that the Horsemen will have power to kill a fourth of mankind—25 percent. How much human life has COVID-19 really taken?

As of August 30, 2021, the number of deaths due to COVID-19 is about 4.5 million according to Johns Hopkins University, and the world’s population is about 7.67 billion. A million and a billion might sound similar, but one billion is actually one thousand times greater than one million. Simple division shows that COVID-19 has only killed 0.06 percent of the world’s population. This is not insignificant by any means, but in comparison to the death of an entire fourth of mankind that the Four Horsemen will cause (Revelation 6:8), it is minuscule—a tiny fraction compared to a quarter of the whole. In other words, the number of COVID-19 deaths would have to be about 425 times greater to reach a fourth of today’s population, which would be almost two billion.

The Four Horsemen will cause death on a scale humanity has never experienced—yet, astonishingly, the Four Horsemen only represent the “beginning of sorrows,” as Jesus says in Matthew 24:8. The remainder of the seven seals, followed by the seven trumpets and then the seven bowl plagues, will lead to the death of the majority of humanity, in addition to the loss of much plant and animal life (Revelation 6:8; 8:7–12; 16:3). These cataclysms will be the culmination of God’s wrath upon humanity for its wickedness (Revelation 15:1).

Therefore, to state a sobering fact bluntly, unless the COVID-19 pandemic intensifies substantially, it is not deadly enough to indicate that the Four Horsemen have begun riding.

This is obviously a sobering point to think about, because COVID-19 has taken the lives of 4.5 million people. Most of us, if not all, know of people who have died from it or have had family members succumb to it. As deadly and devastating as COVID-19 has been, God is going to allow much worse events to take place because of the rampant evil and wickedness engulfing the world. Perhaps COVID-19 will awaken many people to the need to humble themselves, to zealously turn away from the growing popularity of all kinds of wickedness, and to beg God for His mercy and forgiveness.

Since COVID-19 grabbed the world, many prayers have been prayed, pleading for God’s deliverance and healing. However, it’s not enough to ask God to make the pandemic “go away” if societies continue to sprint toward evil. Before asking for healing, we should ask God if we’re doing something wrong, because COVID-19, most likely, is not even the beginning of the “beginning of sorrows.”

If you would like to understand more about the book of Revelation and the prophecies it contains, be sure to watch the telecast “The Four Horsemen.” Also, don’t forget to order your free copy of Revelation: The Mystery Unveiled!, featured in that telecast, today.