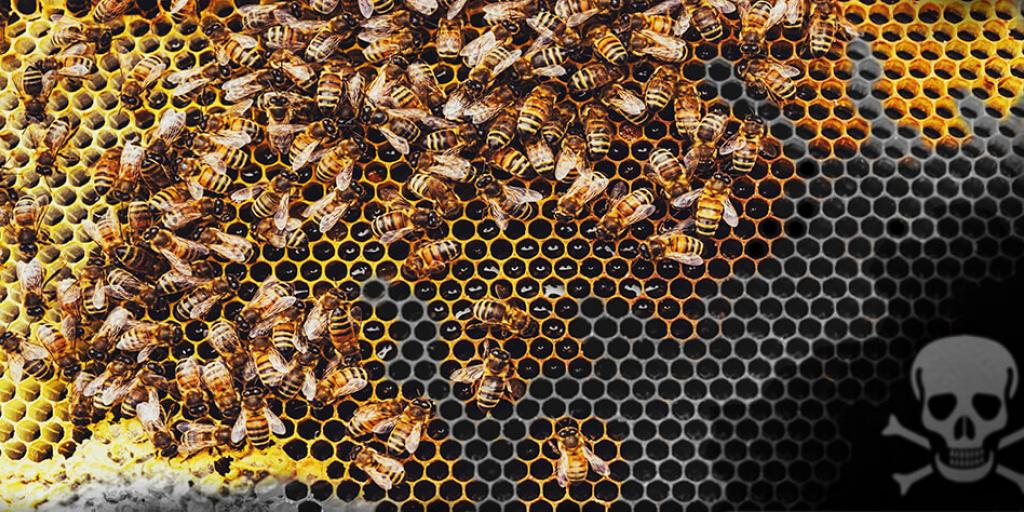 Corn farmers in recent years have seen a growing demand for their crop, for processing into products as varied as ethanol gasoline and soda products. Seeking higher yields, many increasingly use insecticides—poisons—to "protect" their investments. These two trends have long been a source of controversy among nutritionists and ecologists, and now among biologists concerned about their effect on human and animal life and on our food supply.

Demands for more product stimulate the need for better, “safer” ways to get it. One answer to this dilemma has been the invention of neonicotinoids, insecticides made from nicotine (a highly toxic substance found in tobacco leaves). These newer insecticides are made to avoid certain dangers posed by spray-on chemicals such as DDT. Seeds are treated before planting so that, as the plants grow, they develop with the insecticide agent inside them—including edible parts, and the pollen and nectar of flowering plants. Designed and used by mega-agricultural corporations and major drug companies around the world, neonicotinoids have quickly become industry standard.

Bolstering the plants’ natural defenses this way seems logical, and neonicotinoids supposedly have little effect on “non-target” species. However, in addition to the damage that such chemicals could do to human beings, the treated plants are not just affecting pests, but also the honeybees and other pollinators that come into contact with them.

According a recent article published by the American Chemical Society’s Environmental Science & Technology journal, the use of neonicotinoids since the mid-1990s has been connected with the sudden increase of Colony Collapse Disorder (CCD), a phenomenon drastically affecting beehives worldwide (ABC News, “Honeybee Deaths Linked to Corn Insecticides”). These results have been especially linked to mass corn planting: “Beekeepers immediately observed an increase in die-offs right around the time of corn planting using this particular kind of insecticide” (ibid.). Neonicotinoids have become increasingly banned in European countries, especially after incidents involving their improper release in Germany in 2008 caused an immediate, significant drop in local honeybee populations (IO9, “Do People Know Perfectly Well What’s Killing Bees?”). A recently leaked memo from the EPA even contains admissions that such chemicals are a likely cause (Wired Science, “Leaked Memo Shows EPA Doubts About Bee-Killing Pesticide”). However, clothianidin and other neonicotinoids are still widely used in the U.S.

Honeybees and other pollinators have a big impact on earth’s ecosystems, and human food supply. Domesticated bees alone account for almost 15 billion dollars of annual revenue in the agricultural industry, and one in every three bites of food we eat today has been made possible by pollination (USDA Agricultural Research Service, “Colony Collapse Disorder: a Complex Buzz”). Although some researchers downplay the possibility that neonicotinoids are the primary cause of CCD, other evidence has pointed strongly to the contrary.

As new markets, rising demands and, in many cases, greed and competition lead people to manipulate nature and “improve” it by unnatural methods, Scripture’s clear instructions are ignored: “You shall have a perfect and just weight, a perfect and just measure, that your days may be lengthened in the land which the Lord your God is giving you. For all who do such things, all who behave unrighteously, are an abomination to the Lord your God” (Deuteronomy 25:15–17). When those responsible for monopolizing the world’s agricultural production downplay the effects of poisonous, toxic chemicals on the environment (and our bodies) they are guilty of “rigging the scales” so that their destructive actions are protected from scrutiny. Meanwhile, the ecosystem that humankind was commanded to “tend and keep” (Genesis 2:15) is systematically being destroyed, and the damage done to God’s special creations—right down to the tiny honeybees going about their vital industry—will have disturbing, unforeseen effects on our enviorment in the years to come.

Stewardship of the earth is a gift that has been largely misused. However, God promises to put an abrupt end to the poisonous and profiteering activities of mankind (Malachi 4:1), and to bring a time of restoration (Acts 3:19–21; Ezekiel 47:1–12). Read our free booklet, The World Ahead: What Will It Be Like? or watch “A New World Is Coming” for more insight into God’s coming intervention, and a time when all life will be protected.