The World Ahead: What Will It Be Like? | Booklets | Tomorrow's World 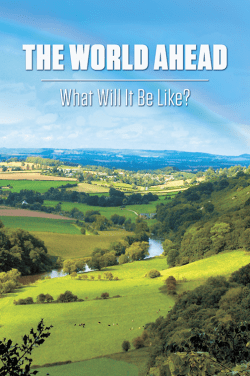 Many eminent politicians and leaders have long realized that the only genuine solution to our massive human problems is a world government. Only this kind of government can bring real peace and stability! But mankind's human efforts in bringing about such government have always failed miserably. The heralded League of Nations founded after World War I did not stop World War II—the most horrifying war in human history—from exterminating about 50 million human beings! The United Nations, founded after World War II, has also failed utterly to bring peace. Literally scores of wars have been raging all over this world in the last few decades, seemingly unaffected—one way or the other—by the so-called "United" Nations! And mankind's puny efforts will continue to fail. For humanity does not know the "way" to peace. To any thinking human being, this should become increasingly evident.

Seeing how human religions have failed to solve man's problems, most educated people in our day have given up on believing in a real God. That is understandable—for mankind has turned away from true religion. Most religions of this world teach and act in a manner totally contrary to the truth revealed in the Bible. However, those who are willing to understand can know that there is a real God. There is a great Creator and Governor of the universe, and He is working out a supreme purpose here below. You, personally, can understand that purpose—if you are willing.