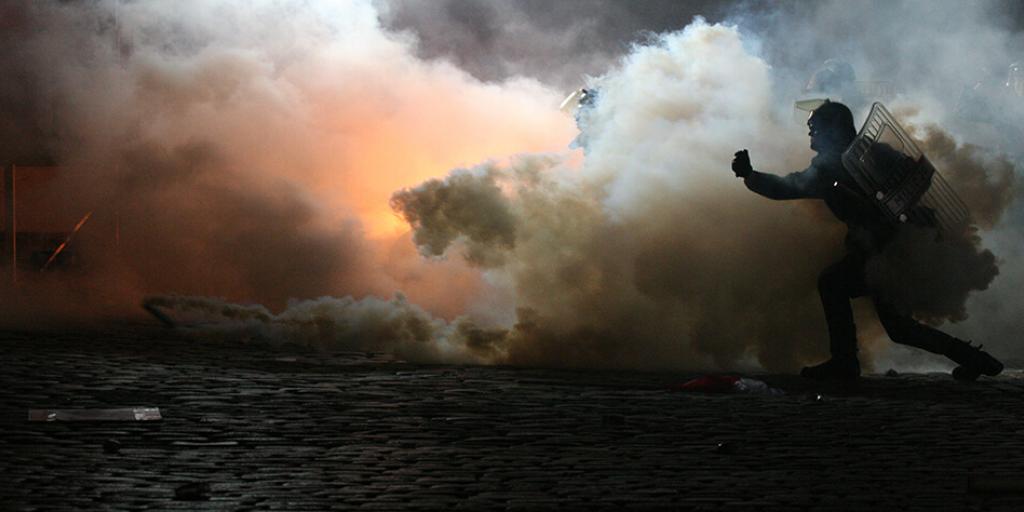 They came from many miles away, descending on the agreed-upon location. The many peoples gathered together as a raging throng. They brought with them an impressive array of guns and firepower. Their goal was simple: to resist perceived oppression. Even more—to throw off the rule of their masters. In their minds, they had suffered enough at the hands of this regime. They viewed themselves as oppressed and downtrodden—prisoners and slaves even. The stage was set for the confrontation and what would be the greatest riot—except that it was very short-lived. In a matter of seeming minutes, the great army of people was dispatched with ease by the king and his army. Those who sought to disturb the peace, resist, revolt, and riot met their end by the thousands.

Is this an historical account? Not quite. It is actually a look into the not too distant future.

The above is a description of events right around the time period of the return of Jesus Christ in power and glory to rule all nations. Will the nations of the earth be glad at His return? Will they rejoice and celebrate? Far from it—they will gather together in resistance and rebellion, with all the armaments they can muster. We could say, they will riot—“violently disturb” the peace of what could conceivably have been a joyous coronation day. You can read a few descriptions of this future encounter in Psalm 2:1–3, Zechariah 14:3–12, and Revelation 19:11–21. (For more info about end-time events, see the booklet Armageddon and Beyond).

What can this future event teach us about the riots we have seen in France, the United States, and Venezuela, and other types of violent social unrest in recent years? How are Christians to process the disturbing images and videos coming into our homes? How do we process the strong emotional response no doubt many of us have? Here are just a few thoughts.

First, we must understand that violence begets violence. The last several thousand years of human civilization has taught us this. News report after depressing news report communicates this. Violence begets violence. This lesson is made plain from biblical examples. Early in mankind’s history, one man, Cain, violently murdered his brother Abel (Genesis 4:8). Much later in time, but in the same chapter, we read of one of Cain’s descendants perpetuating that same violence (v. 23). After more time had passed, violence increased until the earth was filled with it (Genesis 6:5). God had to intervene to break the chain, though He did save Noah and His family.

The final years leading up to Christ’s return are prophesied to be similar to the times Noah lived in (Matthew 24:37). It is not surprising then that we find prophecies in our Bible that fit the description of what we see today in our societies—the breaking of God’s laws and the resultant violence: “There is no truth or mercy or knowledge of God in the land. By swearing and lying, killing and stealing and committing adultery, they break all restraint, with bloodshed upon bloodshed” (Hosea 4:1­–2). Rioting is one ugly aspect of a society that has for a long time perpetuated violence through breaking God’s law. And those who choose to live or “get even” by violence will eventually suffer violence themselves (Matthew 26:52).

The second thing is this: the world needs God’s government. Under God’s righteous rule there will be peace and prosperity. This will be because obedience to God’s laws will be taught as a way of life (Isaiah 2:3). But not only that, the saints who will be ruling with Christ, along with the King of Kings Himself, will have the tremendous power to uphold that law and punish lawbreakers. At the beginning of Christ’s rule, many nations will descend upon the peace-loving, unwalled cities of Israel to loot, plunder, and destroy. Jesus Christ destroys them utterly (Ezekiel 38). Riots simply will not be a thing, as they are in today’s society. And if one does begin, it will not last for very long.

Riots are awful, along with the violence, fear, looting, and general destruction that they bring. And one day very soon, these types of things simply will not happen. We’re not there yet. And, when it does come, let’s not be a part of the masses of people who resist God’s rule. God speed that day!

If you are confused or troubled by the events and unrest currently facing our world, you are not alone. Be sure to follow and subscribe to Tomorrow's World. The publications offered here strive to keep you informed of Bible prophecy and the ultimate solution to mankind's problems—the coming of the Kingdom of God and the Return of Jesus Christ. To learn more, be sure to order The World Ahead: What Will It Be Like?