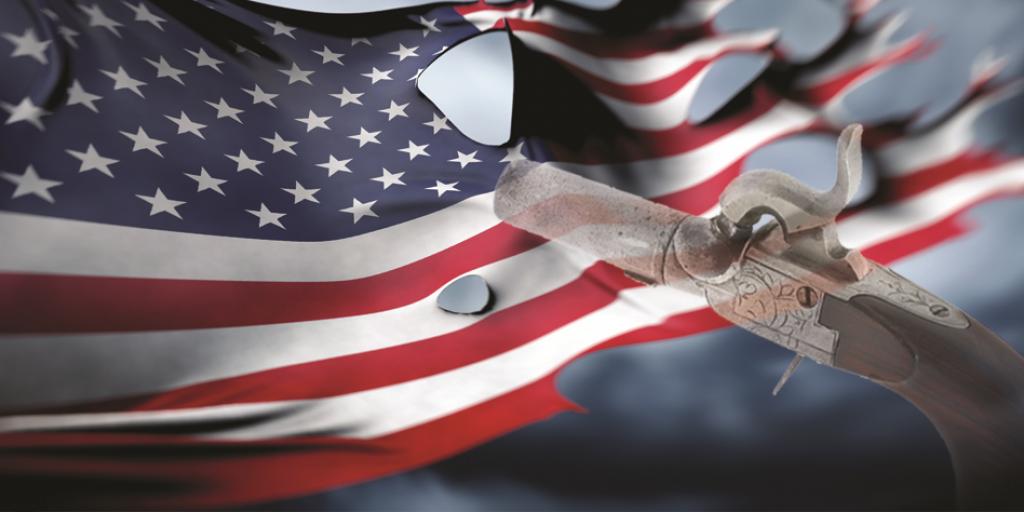 United We Stand, Divided We Fall

The evening of April 14, 1865 was filled with joy and laughter for more than 1,000 Washingtonians who had come together at Ford’s Theater to watch a popular comedic play, Our American Cousin. But soon after the third act had begun, sometime after 10:00 p.m., the mood turned to grief and horror as a bloody stain was spattered onto the history of the United States.

The shocking headline in the next morning’s New York Times said it starkly and plainly: “President Lincoln Shot by an Assassin.” Millions of bullets fired in four years of civil war had already brought great tragedy to the nation. Now, a single bullet from John Wilkes Booth’s Derringer pistol amplified that tragedy as never before.

An Associated Press reporter, on the scene, described what had happened:

[W]hile there was a temporary pause for one of the actors to enter, a sharp report of a pistol was heard, which merely attracted attention, but suggested nothing serious until a man rushed to the front of the President's box, waving a long dagger in his right hand, exclaiming, 'Sic semper tyrannis,' and immediately leaped from the box, which was in the second tier, to the stage beneath, and ran across to the opposite side, made his escape amid the bewilderment of the audience from the rear of the theatre, and mounted a horse and fled.

The groans of Mrs. Lincoln first disclosed the fact that the President had been shot, when all present rose to their feet rushing towards the stage, many exclaiming, 'Hang him, hang him!' The excitement was of the wildest possible description...

Ninety years earlier, in April 1775, a figurative “shot heard round the world” rang out on a Concord, Massachusetts battlefield, spurring a hopeful, ragtag army of Minutemen to unite against a common enemy in the American Revolutionary War. Their dream became a reality, and a new nation was formed: the United States of America. Sadly, that unity would not last. And even though the Civil War ended and the divided nation re-united, many would say that today’s U.S. is still bitterly divided.

Religion, race, politics, sexual orientation and greed have created massive rifts in the structures built upon the nation’s founding principles. No matter how much duct tape national leaders try to apply, the chasms continue to widen. Why is this happening? Have Americans not learned lessons from their past?

God told the tribes of ancient Israel to “beware that you do not forget the Lord your God by not keeping His commandments, His judgments, and His statutes” (Deuteronomy 8:11). Regular visitors to this Web site know that the modern U.S. is the descendant of the ancient tribe of Manasseh (to learn more, order our free booklet The United States and Great Britain in Prophecy). How fitting it is, then, that Manasseh’s name in Hebrew actually means “causing to forget.” Scarcely 60 years after President Eisenhower officially established the nation’s motto as “In God We Trust,” who in America actually trusts the word of God as given in the Bible? All around us are people and institutions proud of heart, worshiping and trusting economic and military might, while turning from God and His commandments.

The living God declared, “if you do not obey me, and do not observe all these commandments, and if you despise My statutes … I will do this to you; I will even appoint terror over you…” (Leviticus 26:14–16). Later He stated, “I will break the pride of your power” (v.19). As we reflect on the 150th anniversary of Lincoln’s assassination, we cannot ignore the sins that have collectively led to so much bloodshed and division. And even if our nation persists in rebellion, we can and should each individually draw closer to God, and ask Him to forgive the collective sins of a great nation in rapid decline.

Scripture warns: “Righteousness exalts a nation, but sin is a reproach to any people” (Proverbs 14:34). Indeed, when we remain united with God we stand—but when we divide ourselves from Him, we will ultimately fall. To learn more, read our Tomorrow’s World magazine article, “The World After America” and watch the telecast, “Why Is America Declining?”