Will Ireland ever unite, or will all or part of it leave the United Kingdom? What will the outcome mean for the future of both Brexit and the EU? After a century of trial and trouble, Ireland may be facing greater uncertainty than ever.

A hundred years after a newly independent Irish nation established itself free of British control, the northern part of the island—the United Kingdom region known as Northern Ireland—faces questions about its future. Will it remain part of an isolated UK, become another European Union nation, or merge with its neighbour Ireland to the south?

During the tumultuous years of World War I, desire for Irish independence reached a new high. The British Army’s heavy-handed response after the “Easter uprising” of 1916 only fuelled further the Irish longing for freedom from British rule. In elections of 1918, the pro-independence party Sinn Féin won a landslide electoral victory, gaining 73 of the 105 open seats. Yet the six northern counties, collectively known as Ulster, wanted no part of the independence movement, led by Roman Catholic freedom-seekers based in Dublin to the south.

The Anglo-Irish Treaty, signed in December 1921, gave Dominion status to the Irish Free State, making it a separate and full member of the British Commonwealth of Nations with an independent status equivalent to that of Canada. Yet it was understood from the start that the Ulster counties would “opt out” of this new Dominion status—and indeed they did, leading to the eventual formation of the Republic of Ireland.

The northern counties of Ireland were always the ones with the greatest ties to Britain and its Protestant heritage. Ulster was also the economic powerhouse of Ireland, fuelled by shipbuilding and aviation industries. Yet, while the Unionist sentiments of most Protestants in Northern Ireland held the province together, a vigorous Roman Catholic minority sought union with the Irish Republic, which was ruled from Dublin.

In the 1960s, long-standing tensions between Northern Ireland’s Protestant and Catholic communities exploded into “the Troubles”—essentially a time of guerrilla warfare conducted between ostensibly Protestant fighters, loyal to Belfast, and the ostensibly Catholic “Irish Republican Army” (IRA), which had ties to revolutionary groups around the globe. Thousands of lives were lost to this violence, and in 1979 the IRA claimed a major victory with the murder of Lord Louis Mountbatten, a member of Britain’s royal family.

The Troubles were finally put to rest by the terms of the Belfast Agreement, signed on April 10, 1998, which was negotiated by UK Prime Minister Tony Blair, a professing Catholic, and facilitated by a nominally Protestant President of the United States, Bill Clinton. Some observers sought to frame the agreement as an outright religious one, or nearly so—it is often still called the “Good Friday Agreement” to play up religious overtones. Yet religion was at most a thin veneer; Sinn Féin, which championed the cause for reunion with the Irish Republic, is a purely secular organization, and the cause of the Unionists, led by ordained Protestant minister Ian Paisley, was in fact a secular matter despite Paisley’s appeal as a religious firebrand.

Can a Divided House Stand?

Despite the signed agreement, power-sharing between the opposing parties has been fragile, with implementations not lasting long. Distrust between Unionist parties and Sinn Féin runs very deep. And now, Brexit is the latest lever being used to try to dislodge Northern Ireland from its union with Great Britain (see “Brexit: The Quest Continues,” in the July 2021 issue of Tomorrow’s World).

Nearly 56 percent of voters in Northern Ireland preferred to remain in Europe rather than support Brexit. Yet their tie to the UK was even stronger, so the Unionists elected to Westminster—the seat of the UK’s central government—were content to go along with Brexit plans, provided Northern Ireland remained part of the United Kingdom. Sinn Féin, on the other hand, preferred the connection to Dublin and the Irish Republic, provided through membership in the European Union.

So, which tie will prove stronger in the long term? Observers have noted that a major problem for successive Westminster governments and leaders is that there is no sense of why Northern Ireland should be part of the UK, other than the wish of the electorate. Gone is any sense of their peoples’ origins or heritage. In a recent article in the Spectator, Scottish columnist Stephen Daisley lamented the Conservatives’ “muddle-along approach” (“Ever weaker Union: The Tories lack a constitutional theory,” Spectator, June 24, 2021). To Daisley, the preservation of the United Kingdom requires clear thinking on a unitary state, sovereignty, and the place of devolved assemblies—whether the Stormont in Northern Ireland, or those in Wales and Scotland—within that sovereignty. But to find and maintain such an outlook would require a clear view of who we are as people and our relationships with one another from a historical perspective, something that has never been established in the century-long life of Northern Ireland.

And this is where we must acknowledge that the cause for the union runs even deeper than most today realize. It is a cause that brings religion back into the equation, because it is found in the book we call the Bible.

Politicians throughout the UK—and, indeed, throughout the world—seem intent on governing without any regard for the word of God. Secular political theories and ideologies are the basis for the UK’s governments, especially since World War II.

The result is a disunited kingdom in which the opponents of unity appear to have the upper hand and the better of the argument. History, especially biblical history, is ignored these days (see the July 2021 Tomorrow’s World article “What’s Behind the War on History?”). We have access to God’s knowledge, but consider it irrelevant to our lives. Hosea, an eighth-century-BC prophet to the northern kingdom of Israel, noted a similar situation when he was inspired to write, “My people are destroyed for lack of knowledge. Because you have rejected knowledge, I also will reject you from being priest for Me; because you have forgotten the law of your God, I also will forget your children” (Hosea 4:6).

The same message was conveyed by Isaiah, a near-contemporary of Hosea and a prophet to the neighboring southern Kingdom of Judah, when he was inspired to tell his people that “it is a people of no understanding; therefore He who made them will not have mercy on them, and He who formed them will show them no favor” (Isaiah 27:11).

The truth of the matter is plain to those with eyes to see. The Eternal God warned Israel from the outset that by breaking His covenant, they would be broken themselves (Leviticus 26:15, 19) and many calamities would befall the nation. We at Tomorrow’s World understand that the people of the UK are descendants of that ancient nation. To find out more about that history and appreciate the circumstances in which the UK now finds itself, request a free copy of The United States and Great Britain in Prophecy, or read it online at TomorrowsWorld.org. Understand for yourself what provides the basis for the United Kingdom that so many are seeking to undo. 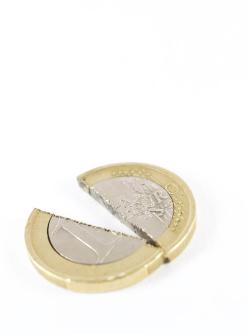