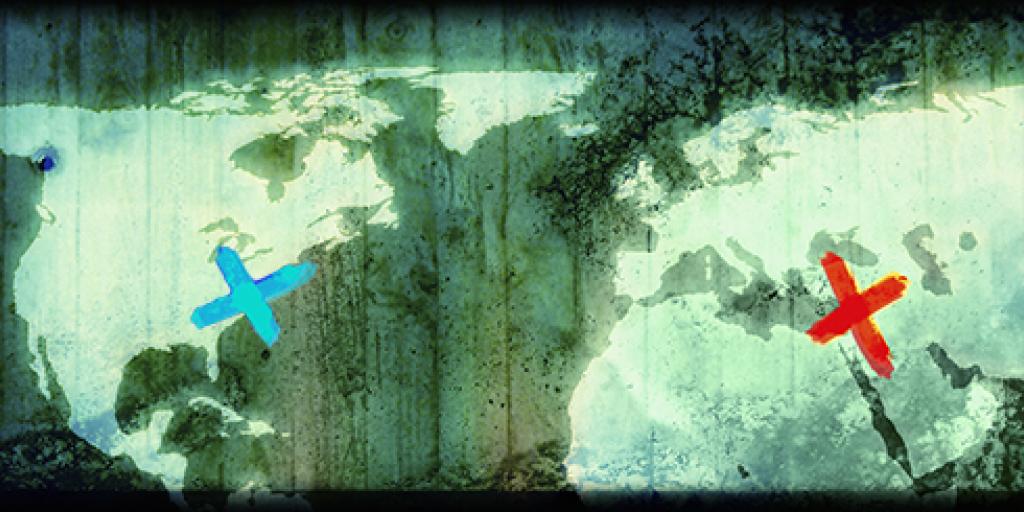 Zionism and the United Nations

With all the troubles facing Israel and the Middle East, newsreaders could easily miss—or ignore—an argument over posters. But, quite often, “little” issues highlight big human interest stories. One Jewish outreach group’s clash with the United Nations over a Jewish history display might do exactly that.

Modern Israel and the UN have long been at odds, to say the least. More than 40 years ago, the UN passed its infamous Resolution 3379, declaring that “Zionism is a form of racism and racial discrimination.” Jews in Israel and around the world were saddened by this declaration, as it proved the UN would consistently side with Israel’s enemies in international disputes. However, it was unsurprising, considering that anti-Zionist forces attacked the new state of Israel shortly after it’s founding, and having lost that war took up their opposition whenever possible through the UN General Assembly, where anti-Israel nations are plentiful enough to form a consistent voting bloc against the interests of Zionism and Israel.

So, when a tiny group of American Zionists tried to plead Israel’s case in the halls of the UN, what response would we expect?

StandWithUs leaders prepared three infographic posters for display in the public halls of the UN. One poster presented the Jewish history of Jerusalem, one presented an account of Arab Israeli life, and one showed a history of the Zionist movement that led to the establishment of modern Israel. At first, UN officials rejected all three. Upon appeal to UN Secretary General Ban Ki-Moon, further review led them to approve one panel.

Ironically enough, they approved the panel about Zionism!

This might seem odd at first, considering how StandWithUs takes a position rejected by nearly all Arab voices and even by many Israelis and diaspora Jews. StandWithUs tells the world that Israeli Arabs have, on the whole, prospered and been treated humanely by the Jewish state, and they consider Jerusalem to be the birthright of the Jewish people and the rightful capital of the modern Israeli state.

Even so, after first rejecting all three displays offered by StandWithUs, UN Secretary General Ban Ki-Moon and UN bureaucrats consented to display the organization’s panel outlining the history of Zionism leading to the 1948 founding of Israel.

Does this reflect any change in the UN’s stance on Israel?  Not likely. More plausibly the top UN leaders, when pressed, saw an opportunity to fulfill their idea of the organization’s mission, which includes a commitment to “practice tolerance and live together in peace with one another as good neighbors.” This act of accommodation might placate some observers who would otherwise point out how the organization has chronically fallen short of this and other lofty goals.

Whatever the reasoning behind this surprising show of tolerance for StandWithUs and its pro-Israeli cause, even most of the UN’s most ardent supporters would agree that by itself the organization is in no way adequately equipped to solve Israel’s current problems, nor the still very much real and present threat posed against Israel by anti-Zionists and anti-Semites.

Israel, too, finds itself no closer to solving these problems. Not only are Israeli Jews far from unified; Israel’s contentious Arab population continues to grow, as does the Palestinian population under Israeli rule and in the Palestine Authority next door.

Many nations share Israel’s desire for peace, safety and an end to wars—the main dispute involves how to achieve that goal, and who will be in control in that time of peace and safety. Yet, long ago, Jerusalem—and the tiny nation of Israel by extension—was prophesied to be a “heavy stone” and a “cup of drunkenness” to anyone who would oppose it (Zechariah 12:1–5). God allowed His people—the Jews and all the other descendants of Israel’s ten tribes—to go into captivity for their sins (Lamentations 1:3–5, see also Deuteronomy 28:41), but He also has a plan and a purpose for them today, which ultimately will bring peace for all mankind.

You can find out more about this plan; order the free booklets, The United States and Great Britain in Prophecy and The Middle East in Prophecy, and watch “The New Jerusalem” today.