Kim Dotcom has won the right to make live video of his extradition trial public on the Internet, but are we mindful that all our actions are, in a very real way, constantly livestreamed?

Human-animal Hybrids: The Science and Ethics of Chimeras

In Greek mythology, a chimera was a grotesque, fire-breathing monster usually depicted with the head of a lion, a goat’s body and a serpent’s tail. But the creation of modern-day chimeras—lab-grown human-animal hybrids—is moving beyond the realm of mythology or science-fiction—which is raising disturbing bioethical concerns.

An exciting discovery of biblical and historical importance was recently made in an ancient dumpsite in East Jerusalem. Controversy has swirled around this discovery, as around other archeological discoveries in Israel, because many enemies of Israel and skeptics of the Bible often see archaeological digs as attempts either to uphold Jewish claims to the Holy Land or to uphold the authority of the Bible. However, despite the critics and the skeptics, this recent discovery tells a piece of ancient and true history, and we see yet again another piece of evidence validating the inerrancy of Scripture.

Unexpectedly and rapidly, the nightmare exploded across Paris, in bullets, bomb blasts, blood and death. It was late Friday night in Paris when the chilling reports began to come in. The world was shocked as news began to spread of the horrific, deadly attacks. We pray for France. We grieve for the victims. And we ask: Why did this happen? What comes next? 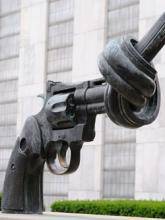 October 24, 2015 marks the 70th anniversary of the United Nations, an international body striving, according to the preamble of its Charter, "to save succeeding generations from the scourge of war" and "to reaffirm faith in fundamental human rights."