Abortion: A Deadly Game of Terminology

What do the terms "thalamocortical pathways," "nociception," "peripheral sensory receptors" and "asynchronous" have in common? They are all words now used in the escalated, seemingly more sophisticated pro-abortion stance of the medical community. Based on a study by a team of medical experts published in The Journal of the American Medical Association (JAMA), abortion supporters now claim that early fetuses in the womb do not feel the pain of the abortion procedures, so therefore they are not really human.

In a JAMA clinical review of the study entitled "Fetal Pain: A Systematic Multidisciplinary Review of the Evidence" summarizes that, "Pain perception requires conscious recognition or awareness of a noxious stimulus. Neither withdrawal reflexes nor hormonal stress responses to invasive procedures prove the existence of fetal pain, because they can be elicited by nonpainful stimuli and occur without conscious cortical processing. Fetal awareness of noxious stimuli requires functional thalamocortical connections." They claim that those connections begin forming between 23 to 30 weeks gestational age. The study alleges that electroencephalography testing reveals functional pain in the baby "probably does not exist before 29 or 30 weeks." 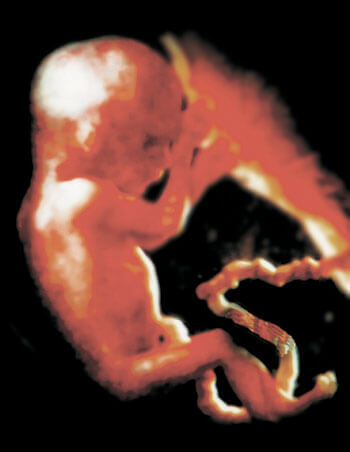 The conclusion reached is that: "Evidence regarding the capacity for fetal pain is limited but indicates that fetal perception of pain is unlikely before the third trimester. Little or no evidence addresses the effectiveness of direct fetal anesthetic or analgesic techniques. Similarly, limited or no data exist on the safety of such techniques for pregnant women in the context of abortion. Anesthetic techniques currently used during fetal surgery are not directly applicable to abortion procedures."

Basically what the study says is that you must have a mind to feel pain, and human life within the womb prior to the third trimester does not have a mind.

It is not our intent here to examine, line by line, this study which provides pro-abortion advocates with what appears to be justification for their position that a baby in the womb is not a baby, but really is only a mindless fetus. Within this definition, it becomes only a piece of tissue that can cause great inconvenience to the bearer of the tissue; therefore it can be cut out, cast away, or used as a source of materials for future advancement of stem-cell experimentation. (Read the Tomorrow's World magazine article "Abortion: A Modern Holocaust?", March-April, 2005, p. 10,).

These new claims have been seriously challenged by the National Right to Life Committee (NRLC), which also has revealed that two of the five study authors were pro-abortion activists, and one of them the head of a large California abortion clinic.

While the medical/political arguments wage on, the simplest argument of all is ridiculed and scorned. Simply put, any fertilized egg implanted in the human womb, if left undisturbed, will form into a sentient human being. Upon being born and reaching maturity, this being will be able to reproduce itself through the same process by which he or she came into existence.

This process is life, which was begun by the great God of the Universe when He reached down into the dust and formed man, breathing into him the breath of life (Genesis 2:7). Puny man, in his overreaching aggrandizement of himself, denies there is a God and has set himself up as able to define what is and what is not, life.

There is a Creator God who defines what human life is and reveals why He created it. This God will soon send Jesus Christ back to earth to address man's failure to exercise proper dominion over this earth and value the life which He brought into existence. Send for our free booklet The Real God, Proofs and Promises, or read it on this website by clicking on the Booklets tab.