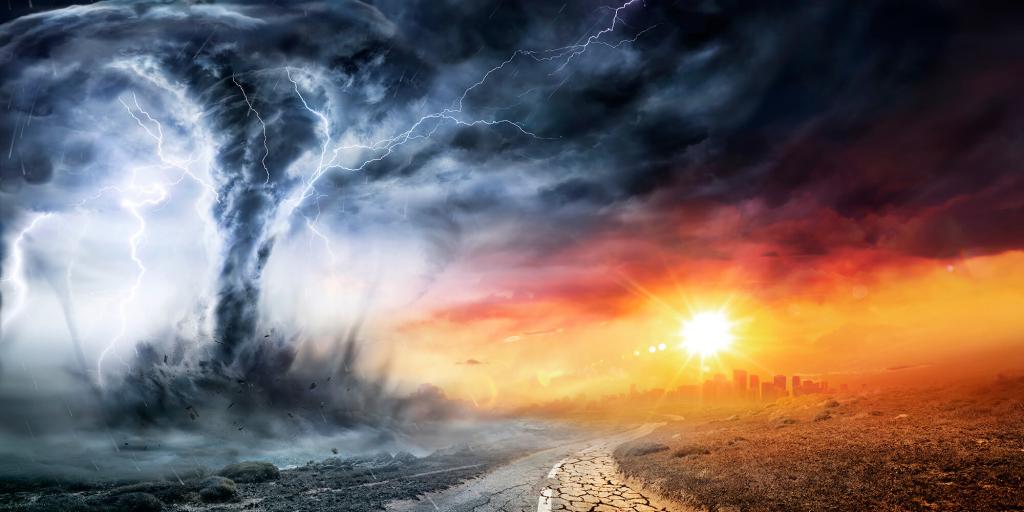 In a quiet moment, as you consider the impact of the major issues that fill the news cycle, do you ever wonder how things will turn out? The hotly contested subject of climate change dominates the news and is on the political agenda of countries around the world. In the spirit of contemplation, fast forward in your thoughts to an evening in 2035 AD and consider the consequences to you, personally, if proposed remedies to climate changes are implemented (cue the blurry, wavy lines and spooky harp music as the scene changes):

As you plan your walk to work tomorrow, you are sitting in the dark, sweating. After several cloudy, calm days, the great bank of solar panels and expansive wind farms that supply the electrical power have not produced the electrical current needed. Air conditioning systems that heat and cool homes and businesses have been limited to a few hours per day. Morning commuter traffic should be light since all vehicles are now electric, which is overloading the electrical grid. The need for electricity cannot be met during weather doldrums. Spells of hot, sunny, and windy weather are now welcomed as being good for the grid. Extended periods of cold, cloudy, windless days are hard on everyone that need electricity.

The nation’s carbon footprint has been drastically reduced, making the Environmental Protection Agency happy. Air quality has improved as the use of petroleum-powered automobiles, aircraft, and trucks has plummeted, replaced by passenger trains. Freight trains now transport most manufactured goods and commodities. It was a big change for people as they adjusted to railway schedules and were not able to come and go as they pleased.

Another factor affecting atmospheric conditions is the reforestation of vast areas of agricultural acreage that once supported large herds of cattle, poultry, and other livestock. Plant-based foods and edible insects have filled, with some grumbling, the dietary needs for millions. The obesity epidemic of the early 21st Century is but a memory.

At this point, let’s end this little contemplation or daydream and bring our thoughts back to the present (complete with a jarring record scratch sound effect!). Many do seriously believe that the drastic changes being planned are the answer to an increasing number of “natural disasters” that have devastated many parts of the earth and are actually caused by manmade climate change. Other experts and pundits contend that these changes in climatological data are cyclical, resulting from atmospheric and solar influences.

The problems are real, and the “proposals” described above are one collection of ideas and actions to accomplish long-term solutions. Other ideological and philosophical ideas on how to solve these same problems would take a different approach, with different remedies. The actual cause of these changes in climate probably lies somewhere in between the extreme views of either side.

Is it possible that these opposing views have overlooked an even more plausible and meaningful cause of the problems that they propose to solve with their differing remedies? As is often the case, mankind focuses on the effects, while overlooking the underlying cause. The purpose of this little fantasy has no political motive. The solution to these seemingly intractable problems is not political. The answers are spiritual.

Anciently, the Creator gave clear instructions for a way of life that would bring the benefits (“blessings”) of peace and plenty that mankind desires. These instructions, known as the Ten Commandments, are found in Exodus 20 and Deuteronomy 5 in the Old Testament of the Bible. Additionally, there are detailed statutes and judgments given as instruction on how to administer these rules for righteous living. Sadly, these laws of morality have not been widely accepted or obeyed. The Creator made it plain that if these ways were ignored and despised, as we see in society today, the results would be catastrophic. Leviticus 26 and Deuteronomy 28 delineate the blessings for obedience and the curses for disobedience. It is there for all to see. I suggest that you read and consider these prophecies.

The biblical prophets gave a clear warning about what to expect. Hosea proclaimed to a sinful nation, “They sow the wind and reap the whirlwind” (Hosea 8:7). The prophet Joel wrote, “Fire has devoured the open pastures, and a flame has burned all the trees of the field” (Joel 1:19) and “Does disaster befall a city, unless the Lord has done it?” (Joel 3:6 New Revised Standard Version). The psalmist sang, “Fire and hail, snow, and clouds; stormy wind, fulfilling His word” (Psalm 148:8). Other Scriptures confirm that God can and will use weather conditions to accomplish His will.

There are many detailed prophecies that explain the unusually turbulent weather conditions in the world today. The free study guide Acts of God: Why Natural Disasters? covers this important subject in detail. Order your copy or read it online at Tomorrow’s World, today.