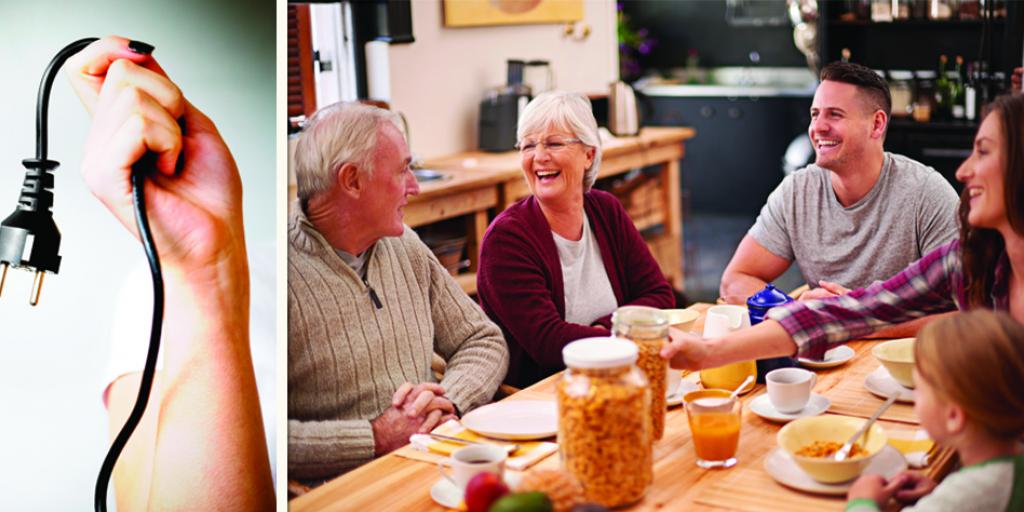 I still remember once seeing a cartoon that summed up an interesting trend in Western society. It showed four children playing on a park bench with their tablets and devices, with a desolate playground in the background. The caption read, “children playing.” This satire illustrates a stark and troubling phenomenon. In our desire to virtually connect through technology, it seems as we are going offline to reality.

An October 16, 2015 The Week magazine article titled, “Smartphones: Changing us for the worse?” describes this phenomenon:

“Let’s face it: 2009 was the year that conversation died… That year, smart phones went mainstream—and our ability to have meaningful face-to-face interactions began to wane… Nine out of ten cellphone users admit to having used their phones during the last social gathering they attended. Under our phones distracting influence, our attention is often divided and colored by impatience; deep, one-on-one conversation is increasingly rare, and so is true solitude… Psychologists have found a 40 percent decline in empathy among college students, with most of the decline taking place after 2000. Studies have shown the mere presence of a phone makes face to face conversations between people more superficial since an interruption can happen at any second… we need to establish a new social norm that will shame people who check their phones during mealtimes, meetings, or personal conversations” (p. 17).

Have you recently noticed families at restaurants not talking or spending time building a bond, but instead with faces illuminated as they escape to their individual virtual worlds? Have you ever seen two people sitting quietly together, texting instead of carrying on a conversation? Maybe it was across a dinner table, or maybe it was on a bench at the park. Maybe it was you. What about the social change in romantic relationships? One Pew study actually showed that 31 percent of teens have “broken up” with a partner via text message instead of face to face. A social app called Tinder, created for “hooking up,” allows the individual to simply swipe through people’s faces until they see their choice. This is not loving our neighbors as Jesus Christ instructed (Mark 12:31)—this is simply “swipe and sin.” Sadly, the consequences are illustrated in a CNN article linking Tinder to a rise in sexually transmitted diseases.

This is not to say, on the flip side, that technology cannot be used for good. God’s Church is preaching the gospel more powerfully around the globe. Things have become more convenient in our daily lives—allowing for many to work remotely without necessarily being tied to an office. We can connect to friends and family around the globe, even video chatting with individuals many miles away.

But, no one is immune to the temptations of using technology wrongly. There is a very real “prince of the power of the air” (Ephesians 2:2) who seeks to fill the airwaves, and our minds, with whatever distractions and temptations may ruin us. He hates human beings, who are made in the image of God, and seeks to harm us in the subtlest ways, for he is “a murderer from the beginning” (John 8:44). He tactfully influences us to feel more virtually connected, all the while disconnecting us from the reality of God’s purpose for mankind! “Resist the devil and he will flee from you” (James 4:7).

In this ever-increasingly “virtual” world, ask yourself, “Am I really more connected?” Are we taking the time to connect face to face, especially when we eat together? Do we take steps to protect our families, by turning off or putting away our devices and toys during mealtime? Are we taking the time to reconnect with our Creator, out of doors, in the beauty of His creation? These are eternal investments worth far more than gold and silver—or any Microsoft and Apple product known to man.

Don’t you think it’s about time that we get “online,” to true reality?

Personal interaction—without distraction—is more precious than rubies, and its importance is detailed in the Tomorrow’s World article “Face Time.” Also be sure to watch the webcast “The Price of Being ‘Always On,’” and study our booklet The Bible: Fact or Fiction?