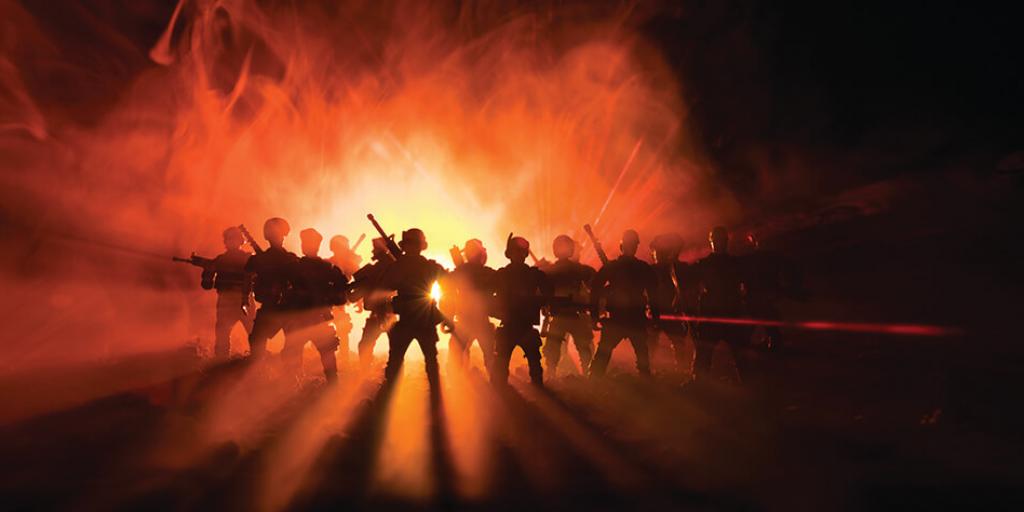 War. It’s an ugly word. It denotes death and destruction, pain and suffering, ruination and devastation. Every year, it affects tens of millions of human beings. Will war ever end?

Wars and rumors of wars. No, I’m not referring to the name of the third full-length album from the band The Chariot. I’m referring to real wars between nations and ethnic groups all over the world. One can scarcely read about human history without reading about conflict, of one tribe massacring another, of one nation at war with another, and of strife between people and cities and countries. Century after century, nations and empires arise and then cease to exist as a result of war. The aftereffects invariably linger for decades—hundreds of thousands of orphaned children, widowed women left homeless, crippled bodies of the survivors, destroyed infrastructure, long-lasting economic ruin, and unpredictable social changes and movements that make—or break—entire cultures.

As Jesus Christ stated in the Gospel of Matthew, “And you will hear of wars and rumors of wars…. For nation will rise against nation and kingdom against kingdom” (Matthew 24:6–7). Christ spoke these words on the Mount of Olives nearly 2,000 years ago. History has proved Him right. In just the last century, over eight million fellow human beings lost their lives in World War I. Almost three times that many were wounded. An additional six million civilians died. Two decades later, World War II posted much larger casualties, with 14 million soldiers losing their lives, along with 34 million civilians. Then there were such conflicts as the Korean War and the Vietnam War. Numerous others occurred, no less devastating for all of our fellow human beings who were directly affected.

There was the Gulf War with Iraq, wars in Bosnia and Herzegovina, Kosovo, Tajikistan, Yugoslavia, Sri Lanka, Rwanda, Burundi, Djibouti, Congo, Algeria, Slovenia, Croatia, Abkhazia, Chechen, Senegal, Sierra Leone, and Darfur, just to name a few. In addition, there are still ongoing conflicts of varying degrees in Afghanistan, Pakistan, Somalia, Nigeria, Syria, and the Israeli West Bank and Gaza Strip. The Middle East is, as always, a powder keg. North Korea and Iran have at various times threatened to escalate tensions to the level of war. There is a palpable fear of war between the United States and Iran, Israel and Iran, the United States and North Korea, and North Korea and South Korea, and now there is the dire struggle between Russia and Ukraine, which is steadily affecting the world economy and causing a host of issues.

Waves of civil unrest, demonstrations, riots, and chaos have threatened governments in troubled places around the world, on every continent but Antarctica, where the greatest conflict to occur was a race to see who would claim the South Pole without freezing to death first. Ours is a time of uncertainty, anxiety, and perplexity.

War is now changing. It is becoming less conventional. It still results in death and destruction, but now it’s called “hybrid war,” a fusion of war, terrorism, and crime. There are no clear battle lines, no contested territory, and no easily identifiable difference between combatants and noncombatants. The enemy may be a stateless entity and live among the population in urban areas. Movement of the enemy may be on public thoroughfares or even public transportation systems. Targets may be innocent civilians in public places. And, it may even include elements of cyberwarfare. And world powers may continuously use unrest and civil disturbances to carry out “proxy wars” within allied nations where they may pursue their interests.

As Romans 3:10–17 teaches us, no one is righteous. None understand and seek after God. Their feet are swift to shed blood and wage war. Mankind does not know the way to peace.

Will the prophesied “Battle of Armageddon” soon occur? Will the earth be destroyed? What will happen to you, your family, and your friends? The Bible reveals that horrific and frightening events are just ahead. But it also reveals an encouraging hope. Order your free copy of the booklet Armageddon and Beyond today, and be sure to also check out the article “Can There Be Peace on Earth?” in the January 2023 issue of Tomorrow’s World magazine.