When violence fills the earth

The societal scourge of spousal, child and elder abuse has grown at an alarming rate over the past couple decades. Violence among family members fills our news headlines as the lives of men, women, and children are being ravaged by an often secret epidemic…domestic violence. How severe is domestic violence in our modern "civilized" world? Is there a way of escape from its oftentimes deadly consequences?

"Domestic violence during the last 20 years has been acknowledged as being a rapidly growing health concern," according to At Health, an organization providing mental health information and services. The statistics provided by At Health are staggering and sobering: 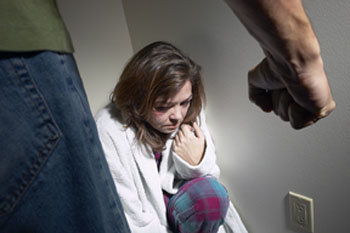 Statistics also show that "Eighty-one percent of men who batter had fathers who abused their mothers" (Silent Witness). "Children who grow up in violent homes have a 74% higher likelihood of committing criminal assaults," according to a study by the Massachusetts Department of Youth Services (ibid.). This cycle of violence and abuse builds momentum with every passing generation and violence grows more prevalent in society with each passing year.

Recently, the harrowing and inspiring story of Connie Culp was publicized. "Five years ago, a shotgun blast left a ghastly hole where the middle of Connie Culp's face had been," reports the New York Times. The shotgun blast came from "Ms. Culp's husband, Thomas, [who] shot her in 2004, then turned the gun on himself. He went to prison for seven years. She was left clinging to life" (ibid.). Years after the terrible shooting by her own husband, a tragic example of domestic violence, Connie received a new face through transplant surgery.

In speaking of the time just before Jesus Christ's return, we read in the book of Luke, "And as it was in the days of Noah, so it will be also in the days of the Son of Man" (Luke 17:26). What was it like in the days of Noah? The book of Genesis states that, "The earth also was corrupt before God, and the earth was filled with violence." (Genesis 6:11) Today the violence seen in astounding domestic violence statistics, publicized incidents of torture, the wars raging around the world, currently estimated at 42, all point to the imminent return of Jesus Christ.

To learn how God's law of liberty can change your life, read our vital booklet, The Ten Commandments. There is an all-powerful God who reveals Himself as Defender of the weak, fatherless and widowed. His protection extends even to those most violently mistreated. You can come to know God and receive the protection that only He can offer in this present violent world.

If you are affected by violence, you can be comforted that not only are there physical resources that may be able to help you (such as local crisis hotlines and counseling services); there are also spiritual resources in God's principles of living, which can bring protection and healing to those who seek them.