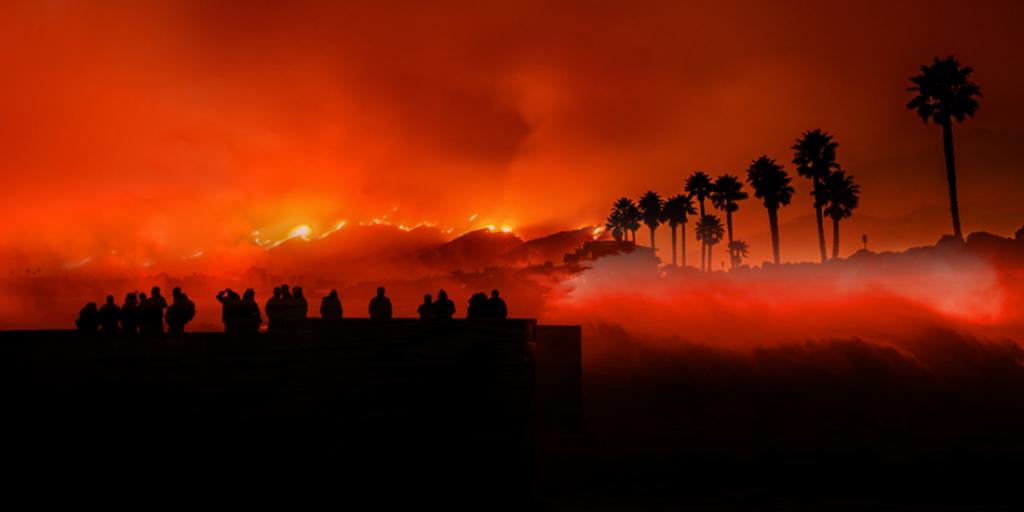 Recently, Hurricane Michael pummeled the Gulf coast and the Mid-Atlantic states, causing widespread property damage and loss of life. On the heels of that, Northern California has experienced the worst fire season on record. Firefighters and rescue efforts are overwhelmed, with some small towns facing complete devastation. The loss of life is staggering, with hundreds of people still missing. Wildfires have raced through the bone-dry hills and valleys, driven by fierce Santa Ana winds—an unusual phenomenon in that area. Fires have also broken out in Southern California in the Malibu area, threatening the homes of the rich and famous. Hundreds of thousands of people have fled to escape incineration.

Earlier this year, in July and August, wildfires in California burned 1.7 million acres, killing 57 people and causing an estimated $3 billion dollars in damages.

The obvious, compelling question is, “Why?” Government agencies and experts will investigate the causes of the fires and how to prevent them. In truth, many contributing factors converged to create a “perfect storm” of wildfire conditions.

A years-long drought made the rugged terrain into a natural tinder box. Increased population has led to the prolific construction of residences, businesses, and recreation facilities, all of which are now exposed to wildfires. Some blame man-made “climate change,” but wildfires have been prevalent in the area for generations.

Considering the magnitude of the destruction, some refer to the situation as “apocalyptic,” ascribing it to an angry God. Could this be true?

Certainly, there is a Creator God who sees the affairs of men. Anciently, God gave rules of conduct that, if faithfully followed, would bring peace and prosperity. On the other hand, He made it plain that if His ways were ignored or despised the results would be catastrophic. Does that mean He directly causes the problems that result from sinful behavior, or are they the natural consequences of ignoring His way of life? God gave mankind the Ten Commandments (Exodus 20) as basic rules of conduct. Additionally, there are statutes and judgments that explain how these rules are to be administered.

In Deuteronomy 28, God listed the good things (blessings) that would result if His rules were followed. He also listed the problems (curses) that would result from not following His rules. In Leviticus 26, the blessings for obedience and the curses for disobedience are repeated in detail. If you read those chapters, you will recognize the problems that you see all around you.

Anciently, the people to whom the laws were given never obeyed for very long. They went through cycles of blessings when they obeyed and great problems when they did not obey. This pattern continues.

King Solomon, who studied mankind with God-given wisdom, wrote, “… The race is not to the swift, nor the battle to the strong, nor bread to the wise, nor riches to men of understanding, nor favor to men of skill; but time and chance happen to them all.… So the sons of men are snared in an evil time, when it falls suddenly upon them” (Ecclesiastes 9:11–12).

This current age is under the sway of Satan the Devil (Revelation 12:9; 2 Corinthians 4:4). He is responsible for much of mankind’s suffering. Certainly, individuals could always acknowledge their errors and choose to obey their Creator. He would then afford them protection and deliverance. But, since there is apparently no real prospect of mankind’s wholesale repentance and a return to God’s ways, disasters will continue.

The Book of Proverbs admonishes: “A prudent man foresees evil and hides himself, but the simple pass on and are punished” (Proverbs 22:3). The lesson in this is to be prepared for difficulties in this age as we look forward to the age to come in the Kingdom of God. While doing our part, we can, like David, cry out to God for deliverance. “God is our refuge and strength, a very present help in trouble” (Psalm 46:1–2).

The Book of Proverbs contains a list of four things in the world that are never satisfied. The fourth insatiable thing is fire. This truism is being demonstrated in stark reality as California burns (Proverbs 30:15–16).

The Tomorrows World magazine and TomorrowsWorld.org contain valuable information and guidance on this and other life-changing subjects, all free of charge.