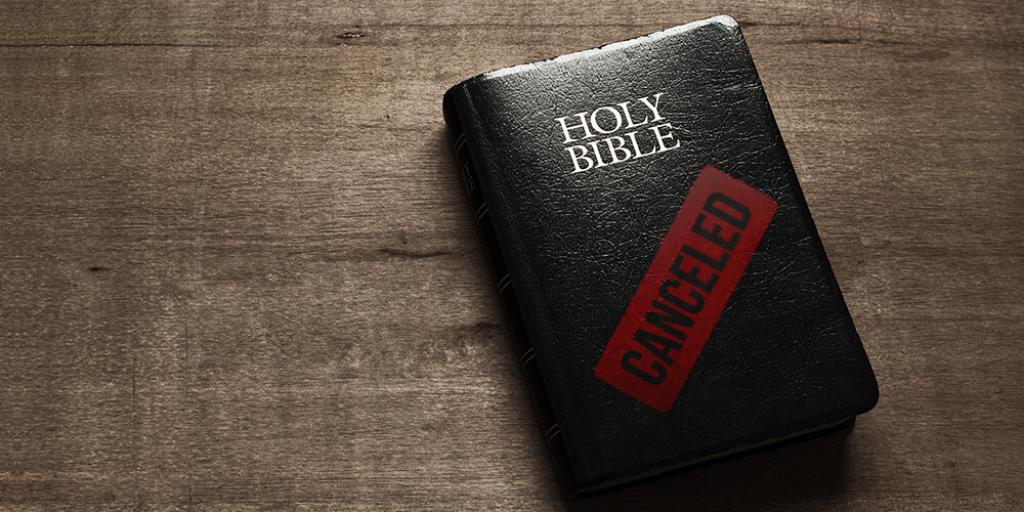 Will the Bible Be “Canceled”? Yes and No

“Cancel culture” picks up more steam by the day. Some important books that have experienced censorship recently are Ryan T. Anderson’s When Harry Became Sally: Responding to the Transgender Moment and Abigail Shrier’s Irreversible Damage: The Transgender Craze Seducing Our Daughters. Often, censored opinions and viewpoints agree in some way with biblical principles. The “canceled list” goes on and on and seems to be growing. However, despite the fad of canceling and censoring politically incorrect material, have you noticed what hasn’t been canceled yet? Shockingly, the Bible!

As the Bible is far from politically correct, it’s very surprising that it hasn’t made the “canceled list” yet—although it did make a list of the top ten most “challenged” books in 2015, according to the American Library Association. The Bible packs a much harder politically incorrect “punch” than most other books because it teaches against many of the “alternative” behaviors and lifestyles championed today. This raises an intriguing question: Will the Bible be canceled at some point because its teachings clash with modern ideas and “values”? The Bible actually gives the answer—and it’s a startling yes and no.

Before we get to the Bible’s answers to this question, let’s consider two—among many—biblical teachings that could make it a prime target of cancel culture.

First, the Bible clearly says that God created human beings as male and female. Jesus affirmed this fact in Matthew 19:4: “Have you not read that He who made them at the beginning ‘made them male and female’?’” This simple slice of reality is taught throughout the Bible in many clear statements and examples, even giving instructions regarding male and female clothing and hair length, which were to help clearly distinguish between men and women and their God-given attributes (Deuteronomy 22:5; 1 Corinthians 11:14–15). God also gave men and women different roles, giving men more of a leadership role and women more of a support role (Genesis 2:18–20; 1 Corinthians 11:3; Ephesians 5:23–25). God made men and women different, with unique talents and gifts, and both sexes are made in His image and reflect Him in special ways (Genesis 1:27). Confusing and denying the distinct blessings that God bestowed on the sexes rebels against God and perverts what was made in His image. Obviously, God’s view of male and female, and the roles they should each fulfill, is not in vogue today.

Another biblical teaching that conflicts with the perversions that are being celebrated today regards sexual behavior. In many Scriptures in the Old and New Testaments, God explains that sexual behavior should only take place between husband and wife (Genesis 2:24). God labels all other sexual behavior as sin, while also explaining that sexual sin leads to disease, debased thinking, broken marriages, and broken families, which research and simple observation confirm (Romans 1:26–28).

These are just two examples that show how the Bible clashes with some of today’s popular beliefs and movements. If attempts to cancel the Bible come, those who read it will not be surprised! God gave us the Bible as a bright and beautiful light (Psalm 119:105), and Jesus Himself explained how the world reacts to light: “[M]en loved darkness rather than light, because their deeds were evil. For everyone practicing evil hates the light and does not come to the light, lest his deeds should be exposed” (John 3:19–20).

So, will the Bible be canceled because of its teachings against much of what is cherished in society today? The Bible itself provides a fascinating answer.

In the book of Amos, we read a prophecy about a coming famine—“[N]ot a famine of bread, nor a thirst of water, but of hearing the words of the Lord. They shall wander from sea to sea, and from north to east; they shall run to and fro, seeking the word of the Lord, but shall not find it” (Amos 8:11–12). The vivid prediction of a coming “famine” of God’s words corresponds to other Scriptures, such as Jesus’ famous statement, “It is written, ‘Man shall not live by bread alone, but by every word of God’” (Luke 4:4). These scriptures don’t explain exactly how a famine of God’s words will take place, but they do indicate that some form of “cancellation” will take place. As more and more viewpoints are censored—especially those that agree with biblical principles—it won’t be surprising to see the Bible censored because some deem its teachings “discriminatory” or “offensive.”

However, the Bible also gives a resounding no to the question of whether it will be canceled, because God’s word cannot truly or permanently be canceled—it is that by which Christ sustains the universe (Hebrews 1:3), endures forever (1 Peter 1:25), and even is where God declares the end from the beginning and the reality in which human beings live (Isaiah 46:10; Acts 17:28). A society that attempts to cancel the words of God will ultimately be canceled by those very same words—unless its people repent.

Though the Bible may eventually be canceled or censored in some form, this won’t last. No movement, scientist, culture, or country has the power to change XX chromosomes into XY chromosomes, wrong into right, or death into life—because God determines those things. Only the Creator of male and female, heaven and earth, right and wrong, and all related truths has that power, and He has chiseled them into reality and recorded them in the Bible. God’s words are not only “firmly fixed in the heavens” (Psalm 119:89, English Standard Version), they also uphold those heavens.

The words of the Creator can never truly or permanently be canceled, censored, or changed by His creations.

Is there a “famine of the word” coming in our time? Learn why the Bible truly is the ultimate book of knowledge, and escape the foolish ideas of this age. Also be sure to check out the article “The Subtle Art of Canceling the Bible” in the Tomorrow’s World June 2021 magazine!