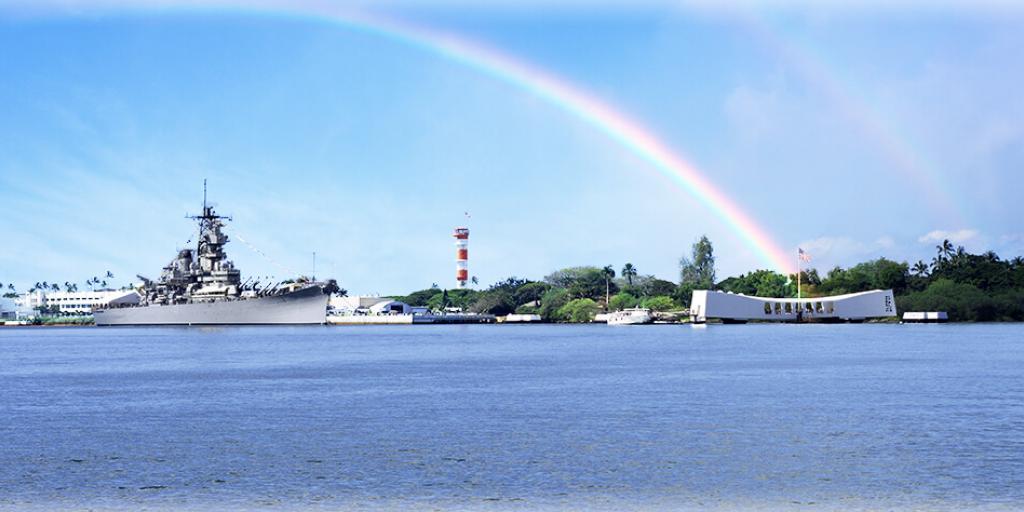 It was a beautiful morning on December 7, 1941. The sunrise was just beginning to sweep across the beautiful island of Oahu. It was Sunday, so while many started their routines, others enjoyed some extra time sleeping in. Without warning, “just before 8 a.m. … hundreds of Japanese fighter planes attacked the American naval base at Pearl Harbor near Honolulu, Hawaii. The barrage lasted just two hours, but it was devastating: The Japanese managed to destroy nearly 20 American naval vessels, including eight enormous battleships, and more than 300 airplanes. More than 2,000 Americans soldiers and sailors died in the attack, and another 1,000 were wounded” (http://www.history.com/topics/world-war-ii/pearl-harbor). In an instant, life for Americans dramatically changed.

Fast forward 65 years later in 2006, and there I was, a 21-year-old U.S. Marine visiting the U.S.S. Arizona Memorial, trying my best to comprehend the magnitude of what happened on that day. As I peered into the shimmering water and watched the black drops of crude oil floating up from the ship to the surface then drift away in a faint shimmering current, my imagination took me back in time. I thought about the sounds of armaments, the smells of battle, and the screams of raid sirens mixed with the shouts of desperate and courageous human beings.

The youth in me imagined what I might have done as a young man stationed in Pearl Harbor that day, hoping I would have been able to take some heroic action to save some lives. Yet wisdom awakened me to reality: that I could’ve easily joined those young sailors and Marines killed in the Arizona—resting peacefully in their sacrifice. The massive ship underneath the water illustrated a stark reality of the horrors of war.

The back of the memorial held a large marble wall engraved with the names of the deceased, and a sober dedication: “To the memory of the gallant men here entombed and their shipmates who gave their lives in action on December 7, 1941 on the U.S.S. Arizona.” As I read the wall, pondering what kinds of men they were—and could’ve been if they survived—a surge of emotion ran through me. It deeply saddened me to think that many on the ship were my age and younger, and had their lives cut short before enjoying the fullness of life.

The other side of the memorial shows a powerful victory salute to the Arizona by the U.S.S. Missouri (permanently stationed bow to bow with the Arizona, signifying the beginning and the end of America's involvement in the Second World War). This juggernaut of a ship (on whose deck Japan formally surrendered) imposed a sense of victory and power, and it almost seemed like it was telling the sleeping men in the Arizona, “hold tight gents, there is a brighter future ahead!”

Today in 2016, ten years later on the 75th anniversary of the attack on Pearl Harbor, I reflect with hope in God the Father’s promise that there is indeed a brighter future ahead. He is sending His Son Jesus Christ to put an end to warfare and its unmeasurable suffering (World War II alone killed an estimated 85 million people). Christ is not the author of warfare but is the “Prince of Peace” (Isaiah 9:6). Satan is the author of war and murder (John 8:44). War results from satanic attitudes and strategies that lead to ongoing conflict (James 4:1–4). God Almighty promises to end the practice of war and instead will teach peace and prosperity. He inspired Micah to write, “He shall judge between many peoples, and rebuke strong nations afar off; they shall beat their swords into plowshares, and their spears into pruning hooks; nation shall not lift up sword against nation, neither shall they learn war anymore… For the mouth of the Lord of hosts has spoken” (Micah 4:3–4). God speed that day!

To learn more about the magnificent future of mankind read our booklet The World Ahead: What Will It Be Like? If you are also wondering what will happen to the billions of people who have died from warfare, watch our telecast “Victory over Death.”