Armageddon and Beyond | Booklets | Tomorrow's World 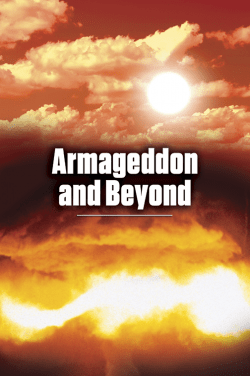 Prove it straight from your Bible's own pages!

In the first decade of the 21st century, most of us realize we live in a very dangerous world. It was just six decades ago that a new weapon of unprecedented capacity was first unleashed, when the United States dropped atomic bombs on the cities of Hiroshima and Nagasaki in Japan on August 6 and 9, 1945. A new era of mass destruction had begun.

At the end of World War II, General Douglas MacArthur, Supreme Commander of the Allied Powers, accepted Japan's unconditional surrender. Aboard the battleship U.S.S. Missouri, General MacArthur summarized the danger and the choice facing humanity in this new era:

"Military alliances, balances of power, leagues of nations, all in turn failed, leaving the only path to be the way of the crucible of war. The utter destructiveness of war now blocks out this alternative. We have had our last chance. If we will not devise some greater and more equitable system, our Armageddon will be at our door. The problem basically is theological and involves a spiritual recrudescence [renewal] and improvement of human character that will synchronize with our almost matchless advances in science, art, literature and all material and cultural developments of the past two thousand years. It must be of the spirit if we are to save the flesh."