This magazine has subscribers in remote parts of the world, including some in regions north of the Arctic circle. In this issue, we’d like to shine a light on the life of one of our subscribers living in such a region.

Many of us have recently experienced a much higher level of physical isolation than we had ever known before, and for a prolonged period, as government lockdowns during the peak of the COVID-19 pandemic affected as much as one-third of the global population. However, those who live in the remote corners of the earth may have noticed little difference. In areas where the population is thinly spread, people may be separated and “socially distanced” from friends, neighbors, and extended family members much of the time.

Gjoa Haven is a small town of fewer than 1,200 Inuit in the northern Territory of Nunavut. It is within the Arctic Circle, closer to the North Pole (less than 1,500 miles/2,400 km) than it is to the Canadian capital city of Ottawa. The town sees an average annual daily temperature of just 6.1° Fahrenheit (-14.4° Celsius). To put that into a clearer, icy perspective, the average annual rainfall in Gjoa Haven is just 3 inches (7.8 cm), while its average annual snowfall is 51 inches (130 cm)!

The local language is Inuktitut and the Inuit call this place Uqsuqtuuq, meaning “lots of fat,” because of the many sea mammals in the region. The English name for the community reflects its historical role in Roald Amundsen’s discovery of the Northwest Passage (see “Gjoa Haven, Nunavut,” in the November-December 2017 issue of Tomorrow’s World). Gjoa was the name of Amundsen’s ship, and the men on that expedition spent two winters in this region, interacting with and learning from the local Inuit population.

Adam Hatkaitok was born and raised in Gjoa Haven and has been reading and studying Tomorrow’s World materials for a number of years. We interviewed him about life in such an isolated region and how he came across our publication.

Tomorrow’s World (TW): What was it like to grow up in Gjoa Haven?

Adam Hatkaitok (AH): Well, the first answer I can give you is “pretty cold,” but it is okay. We can cope with the isolation. Living up north for so long, the cold becomes kind of fun, as in playing out in the snow when you’re growing up. Most schoolwork is basically the same as any other place in Canada, although right now schools are closed because of COVID-19.

TW: Do you feel isolated from the rest of the world or does the distance not affect you?

AH: As a community, we all know one another so well, so we are connected together. But are we isolated apart from the world? Yeah, we have a huge sense of that. Most people, when they are travelling for medical reasons, take that as excitement, with gladness.

TW: Even if they have something medically wrong with them, they are still excited to travel out of the community for a little while?

TW: Has the response to COVID-19 affected you or your community? Is being isolated a benefit during this crisis?

AH: For the first time in Nunavut history, people are ordering groceries online. Nunavut is one of the last places in the world that does not have any cases of COVID-19.

TW: If you have no cases in the town and are closed off to outsiders, why should anything have to change?

AH: They want to keep COVID-19 out of the Nunavut Territory because we have no hospitals or doctors in most communities—we have nurses and local health clinics. If it does impact Nunavut, it is going to have a very negative impact on our communities because there are a lot of people with respiratory illnesses.

TW: How has your community changed since you were young? Or are things still the same?

AH: There have been minor changes. Well, the drug activity now—children under the age of twelve are getting into cannabis. Some children don’t attend school. That is probably one of the biggest problems, along with a general lack of respect going around the community, which has become serious.

TW: Why do you think that is happening?

AH: I can only point out social media. Everyone here nowadays is hooked to the Internet, rap music, and stuff like that. Back in my day, I was permitted to listen to the music I liked, but I was to never, ever follow their examples. Even movies and TV shows—we were permitted to watch these but never to follow their examples. But nowadays I guess the problem is global. We see a lot of youth watching and listening to this stuff and they, in some cases, apply it to themselves. The youth are still pretty respectful to their elders. Only so much is tolerated before they have to listen to what their elders say. When the parents, or even grandparents, realize the youth are behaving harshly to one another, then they will sit down and have a talk with them and [the youth] will heed their advice.

TW: How long have you been a subscriber to Tomorrow’s World and how did you first hear about us?

AH: Well, it kind of started when I was a little kid. I was listening to the radio and I heard this guy that went by the name of Herbert W. Armstrong, and he was saying something about a coming kingdom. They would play these reruns on local radio—like, for example, how they play music and interviews from years past. Then [in 2010], I saw Roderick C. Meredith on VisionTV, and that’s how I started paying attention. I had no idea of the connection until doing more study into the Tomorrow’s World program. Everything from online material, booklets, the magazine—that’s when I realized that Mr. Meredith had worked closely with Mr. Armstrong.

TW: If you could send a message to Tomorrow’s World subscribers during this COVID-19 crisis, what would you say?

AH: Well, I’ve lived in isolation for so many years that I can definitely say that we’re adaptable. We can adapt. It seems like a long time, but I live in isolation and still have my sanity pretty well. For those that are enduring these hard times, I can say that, in some ways, it can be a blessing because, for example, you can get to relate more with your family.

Our thanks to Mr. Hatkaitok for spending his time with us and for sharing with our readers his interesting perspective!

Herbert W. Armstrong, our predecessor in this Work, broadcast over the radio from the early 1930s, then expanded to television before his death in 1986, reaching the far corners of the globe with the Plain Truth magazine. We are continuing that Work through this publication and other Tomorrow’s World media as we preach and teach about the coming Kingdom of God. This is the Good News, the message Jesus Christ commissioned His Church to spread to all nations of the world until His return. 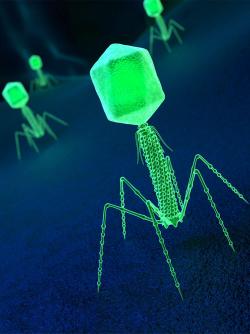 Just What Is a Virus?