The European Union has drafted a law that will allow “Brussels to impose economic pain—ranging from trade and investment restrictions to sanctions on intellectual property rights—on any country that has sought to economically blackmail the EU” (Politico, December 6, 2021). This law will be the EU’s biggest foreign policy advance in decades. It will provide the European Commission with power to enact trade sanctions without specific approval of EU member states—essentially giving the EU’s executive branch far greater autonomy and far less oversight by member states. Ultimately, it will reduce the power of member states and shift more power to the EU.

This new law is intended to be defensive in that the goal is to protect EU member states that may be attacked by trade sanctions from without. However, any defensive tool can also be used offensively; many nations have used similar tools to throw their political and economic weight around.

What is the potential significance of this new EU law? Scripture provides unique insight. The Bible reveals that a European “beast” power will rise at the end of the age, wielding not only unstoppable military power, but also immense economic power (see Revelation 18). It will enrich itself and enable other nations to become rich through trade—potentially by using trade-related tools like the currently proposed law. This law, should it pass, could aid the rise of this future European “beast.”

Wars Ahead on Three Fronts?

Respected columnist Ambrose Evans-Prichard recently wrote that “the world is at the most dangerous strategic juncture since the Cuban missile crisis in 1962. The West faces escalating threats of conflict on three fronts, each separate but linked by unknown levels of collusion: Russia’s mobilization of a strike force on Ukraine’s border, China’s ‘dress rehearsal’ for an attack on Taiwan, and Iran’s nuclear brinkmanship” (Telegraph, December 9, 2021).

As Russian troops have invaded Ukraine, and China rattles sabers against Taiwan, some experts fear the two nations may try to coordinate their attacks, thus splitting Western powers on two simultaneous fronts. Whether this will occur remains to be seen. While presidents Biden and Putin recently spoke, no doubt in an effort to try to lower the growing tensions, some have accused Europe of lacking the drive to stand up to Russia (Politico, December 7, 2021). Germany has responded by authorizing $113 billion to be spent on building its army—a shocking and unprecedented action for Germany in the post-war era (BBC, February 27, 2022).

On a third front, the situation with Iran is sobering. Experts believe Iran will soon have weapons-grade plutonium and already has the missiles to use it.

With the United States preoccupied by internal strife, Russia’s invasion of Ukraine has pushed Germany to militarize more rapidly, and the weakness they see in their global opponents may encourage China and Russia to seek closer coordination in their challenges to Western powers. World events are heating up, and “wars and rumors of wars,” which Jesus Christ said in Matthew 24:4–8 must precede His coming, are becoming very real. But there is much more to come.

According to the United Nations, “Tens of millions are going hungry in Latin America and the Caribbean as the Covid-19 pandemic sharpens a regional malnutrition crisis to its worst levels in decades” (CNN, November 30, 2021). From 2019 to 2020, rates of hunger in the region rose by 30 percent. Lockdowns and loss of jobs have limited people’s ability to obtain food, with women going hungry at greater rates than men. In Guatemala, Honduras, and El Salvador, nearly half the population is in a state of food insecurity. A third of Argentina’s population is hungry, and analysts fear the impact of another round of hyperinflation. This crisis has been building for years due to many factors, including political instability (Bloomberg, November 30, 2021).

In Latin America and the Caribbean, nearly 40 percent of the population—267 million people—experienced moderate to severe food insecurity in 2020 (Al Jazeera, November 30, 2021). Around the world, according to a July 2021 report by Oxfam International, eleven people die every minute from hunger! And “the number of people facing famine-like conditions has increased by six times over the past year.”

Today, many people live with excess even as many more are starving. Many world leaders vie for power and control while their citizens suffer. Thankfully, the Bible foretells a coming time when food insecurity and starvation will be a thing of the past—yet this will not come as a result of human efforts, but only with the Second Coming of Jesus Christ. His return to set up the Kingdom of God on earth will bring an end to suffering.

The costs of fertilizer have roughly tripled since last year, which has serious implications for world food production (Fortune, November 4, 2021). According to the CEO of a large Norwegian fertilizer producer, “The world is facing the prospect of a dramatic shortfall in food production as rising energy prices cascade through global agriculture.” He predicted very low crop yields in the next harvest cycle and noted that “the delayed effects of the energy crisis on food security could mimic the chip shortage crisis.”

As reported by many news outlets, rapidly rising energy prices across the globe are putting upward pressure on the price of farm-produced goods. Rising energy prices make it more expensive to dry and preserve foods, produce packaged food, and bring food to market. Floods and fires have also impacted food prices. In China, flooding and high energy costs have reduced crop yields. As costs increase and fertilizers become scarce, food production rates will drop off further. Add natural disasters and the derailment of fertilizer-carrying trains to the mix and the situation becomes grave. While the farm industry has learned how to increase crop yields to feed greater numbers of people, fertilizer has been a key ingredient in making this possible. Without fertilizer, crop yields will drop, and people will go hungry. As an American investigative journalist once noted, “There are only nine meals between mankind and anarchy.”

Bible prophecy predicts devastating food scarcity at the end of the age that will contribute to the deaths of hundreds of millions of people (Mark 13:8; Revelation 6:7–8).

As a reaction to nationwide lockdowns and isolation of the unvaccinated, COVID-19 riots began to erupt late last year across Europe. Riot police in Brussels “were forced to use water cannon and tear gas as peaceful demonstrations turned violent” (Telegraph, November 22, 2021). Netherlands police opened fire on a crowd, wounding four. Austria, Italy, Croatia, Denmark, and Switzerland also experienced demonstrations by citizens who see these aggressive restrictions as governmental overreach.

National governments point to rising COVID-19 rates and struggling health care systems as justification for extreme measures. Germany is debating forced vaccination of all citizens. Slovakia announced a “lockdown for the unvaccinated” (Euronews, November 19, 2021). On France’s Caribbean island of Guadeloupe, riots continued for days and caused road and travel closures across the island (AP, November 21, 2021).

Yet, COVID-related unrest is just one of Europe’s current ills. Analysts warn that Europe has entered a new stage of in-stability. “Accumulating external threats and internal divisions, coupled with a weakening US security alliance, relentless Russian subversion” (The Guardian, November 21, 2021). A power vacuum is growing, and Bible prophecy foretells a coming time when ten leaders in Europe will give their power over to one strong leader (Revelation 17:12–13). We are watching the continent descend into a type of chaos that will eventually see a temporary reprieve as Europe’s prophesied rise comes to pass. 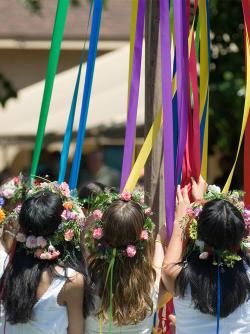 Where Is Our Anger Leading Us?