The Majesty of Mountains

Growing up in the state of Texas, mountains were not really a big part of my visual vocabulary. I had seen them in books, photos, paintings and movies, but I had never seen one with my own eyes until I was in my early thirties. However, when I did finally lay eyes on one—driving into the famous Rocky Mountains of Colorado—I realized I would never be quite the same again.

There is a startling majesty about mountains. They can move us, inspire us, and even intimidate us. They seem the perfect pictures of strength and stability—of power and permanence. And when we view them, we must keep in mind the words of the prophet Amos:

For behold
He who forms mountains,
And creates the wind,
Who declares to man what his thought is,
And makes the morning darkness,
Who treads the high places of the earth—
The Lord God of hosts is His name (Amos 4:13).

Let’s take a moment to consider these magnificent sculptures of the natural world, and to consider, as well, what the Artist behind their creation may be seeking to tell us through His works.

It’s easy to think that mountains are all alike, especially if you have only lived near one kind, but there are actually several types.

Fold mountains are the most common. Geologists believe they are formed when different portions of the earth’s crust—which is always in motion, however slowly—push against each other and cause the land to buckle and bend. These are the sort of mountains that my family and I saw in Colorado and that form the famous Himalayas, including Mount Everest.

Fault-block mountains form when cracks in the earth’s crust allow large blocks of rock to be pushed higher than their surroundings. They are often very steep on at least one side. Examples of these include the Sierra Nevada range of California and the Vosges Mountains of France.

Volcanic mountains and dome mountains are each formed by the pressures of molten magma within the earth. In the case of volcanic mountains, that magma makes the surface in the form of lava and ash. As these materials continually build up and cool on the surface, a mountain like the Philippines’ Mount Pinatubo or Japan’s Mount Fuji is formed. But in the case of dome mountains, the hot magma never makes its way to the surface. Rather, the pressure caused by the magma pushes higher the layers of earth above it. Over time, the magma cools into solid rock, and erosion shapes the raised surface, creating a dome-like appearance that is further shaped by erosive forces.

Finally, there are plateau mountains. These mountains are actually formed by the lowering of the surrounding area, as rivers erode and cut their way to lower and lower depths. The striking buttes of Monument Valley in Arizona are famous examples.

Shapers of Weather and History

But more than mere geological features adding variety to an otherwise flat planet, in their own way mountains are participants in the world around them, shaping activity and events by the power of their presence.

Mountain ranges have a profound influence on weather patterns. As moving air encounters the elevated terrain of a mountain, it is forced to rise, which cools the air and triggers condensation and rain. If the mountains are high enough, the difference between the weather on one side versus the other can be dramatic, causing a “rain shadow.” In this case, one side of the mountain range gets the benefit of the forced condensation, with frequent rainfall and fertile land. The other side of the range, however, is denied that rain and must settle for the drier air that passes over the mountain. These regions can become arid and parched. The Judean Desert and the Dead Sea area result from such a rain shadow caused by the Judean Mountains, and the Gobi Desert lies in the rain shadow of the Himalayas.

But more than shaping weather, mountains have helped shape civilization.

The most obvious influence mountains have is in the movement of migrating peoples—acting as both channels and boundaries, directing and shaping the flow of moving populations. The Caucasus Mountains in Eurasia, for instance, may have played a significant role in the movement of wandering Israelites into the European continent.

When God says of the nations that He has “determined their preappointed times and the boundaries of their dwellings” (Acts 17:26), the mountains of His creation are one means He has used to accomplish that.

In the case of the polis or city-states of ancient Greece, the mountains had a dramatic impact on the culture of that civilization. With more than three-quarters of Greece covered with mountainous terrain, movement between cities was extremely difficult, forcing cultures and political organizations to become very localized and autonomous. As a result, relatively close city-states, such as philosophical Athens and militaristic Sparta, could develop in starkly different ways. And the mountainous nature of the land also forced the ancient Greeks to establish colonies elsewhere along the Mediterranean to support themselves, further shaping their own culture and the cultures of the surrounding people, as well.

Given the influence of ancient Greece in modern Western culture, one could say that the mountains of Greece have impacted the world!

A Picture of Their Creator

God uses mountains and the natural sense of power and might they project to point us to Himself.

When we look at the magnificence of a mountain, standing firm and seemingly immovable, God wants us to pause and reflect on the power of the One who created that mountain! When King David praised his Creator, who is “the confidence of all the ends of the earth,” he noted that it is the God Almighty “who established the mountains by His strength, being clothed with power” (Psalm 65:5–6).

Yes, the awesome sight of Mount Everest or the peaks of the Grand Tetons in Wyoming can stir our hearts as we consider their grandeur and scale. But the Ever-Living One wants us to consider that, if these majestic features of the land impress us and force us to consider how small and relatively fragile our own lives are in comparison, how much more majestic and powerful He is—the One who wielded the power to create these vast monuments of stone and brought them into existence by His will! Surely no statue carved by man should impress us so much.

In fact, perhaps the greatest testimony the mountains can give to the awesome power of their Creator is that, for all their air of strength and permanence, even they quake and tremble at His presence and will yield at His return (Revelation 6:14; 16:20)!

Mountains are one beautiful example of the strength of God made visible in the world. When he needed a reminder of his Creator’s power to help and to save, King David said, “I will lift up my eyes to the hills” (Psalm 121:1). They should so remind us, as well. 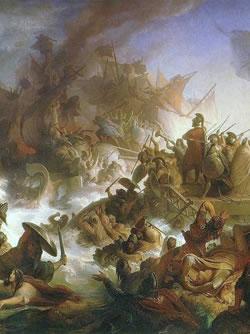 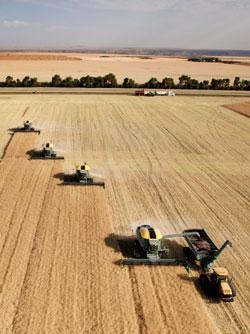