Do your genetics really hold all the answers to your past, present, and future? Or does the remarkable intricacy of life’s incredible design reflect the works of a Creator with even greater plans in store?

Human genetics are powerful. Watching a growing son match his father’s stride or hearing a mother’s voice in her teen daughter can be striking. If you look at your hands, eyes, hair, and many other features, one biological mother and one biological father clearly gave much of themselves to you. How we look on the outside and how we work on the inside is largely passed down from our parents.

All these heritable traits are found in DNA—a long, twisted, ladder-shaped molecule composed of just four chemicals assembled into 23 pairs of chromosomes. Half come from your father and half from your mother. Genes are short DNA sections and each performs specific functions. Your “genome” is your complete set of genetic information, coded within your chromosomes and genes. When researchers in 2003 first “mapped” the entire human genome, hyperbole abounded. As Richard Gibbs wrote in Nature, “The announcement was hailed as ‘the end of the beginning’ and a launch pad for a new era” (“The Human Genome Project Changed Everything,” August 7, 2020). Our genes were thought not just to determine physical attributes like eye and hair color, but also far more complex traits, such as criminality and promiscuity. Visions of genetically engineered “super babies” were borne of this deterministic view, and theorists speculated over the possibility of mixing and matching the “perfect” factors. Theories and possibilities seemed endless.

DNA Is Just the Beginning

Reality is different from theory, however. Skeptics of complete genetic determinism pointed out objections. Scientists had thought it would require more than 100,000 genes to account for the range of human physical and behavioral complexity—yet the Human Genome Project only sequenced a measly 20,000. And studies of identical twins could not turn to DNA to explain notable differences of health status and diseases acquired.

Even within the womb, DNA leaves some unanswered questions. All cells in a person’s organs and tissues have the same DNA, yet the cells themselves in the various tissues and organs differ in their specific shapes, structures, and functions. For instance, the skin cells on your hand and the eyeball cells in your eye socket have the exact same DNA within the nucleus of each cell. Yet there are obvious differences between your skin and your eyeballs! How do we explain your body “knowing” which tissue to form in each place? If the cells on the palm of your hand had become confused, eyeballs theoretically might have sprouted and grown there. Particular genes are somehow turned on and off at the right time and right place.

The field of epigenetics is giving us an even more intricate view of genetic complexity. It studies the reversible mechanisms whereby environmental factors like exercise or excess alcohol can “turn on” or “turn off” specific genes for the good or the harm of the body. All this is accomplished without changing the actual genes. Of the several epigenetic “marks” or “switches,” methylation and histone modification have been studied the most. Methylation is the bonding of an extra chemical to a gene. Much like a sticky note covering a passage of print on a page, an attached methyl group can block the effectiveness of certain proteins that “read” the genetic code. Thus, the affected gene is deactivated or turned off.

Histones are what DNA normally wraps around, much like the pages of a book are attached to the binding in the book spine. A new, tightly bound book may not allow you to open the pages fully for easy reading. Similarly, when DNA is bound tightly by a histone, it is inaccessible and “turned off.” Like methylation, this epigenetic factor may be passed down to offspring.

Epigenetics suggests important implications for us individually—we have a degree of responsibility to our future selves and even to the next generation. Lifestyle choices made during our youth affect our mental and physical health in later life. And heritable epigenetic switches passed down to children present even greater concerns. Researchers reason from animal studies that human binge drinking may even affect the brain development of offspring who are not directly exposed to alcohol (“Binge Drinking and Intergenerational Implications: Parental Preconception Alcohol Impacts Offspring Development in Rats,” Journal of the Endocrine Society, vol. 2, issue 7, July 2018, pp. 672–686). A 2008 study found that children whose mothers had been pregnant with them during the Dutch winter famine of 1944–45 were more likely to develop heart disease, schizophrenia, or type 2 diabetes (“Persistent epigenetic differences associated with prenatal exposure to famine in humans,” Proceedings of the National Academy of Sciences, vol. 105, issue 44, November 4, 2008).

Scientists tell us the sea of chemicals that modern life bathes us in can trigger epigenetic changes outside of our control. Increasingly, the epigenetic changes made by our environment may affect our future health, even though we count our calories and faithfully get our “steps” in.

God’s Plan for You: Genetics and the Bible

Truly, humankind is wonderfully made. The wonder of a genetic code written in the masterful chemical script of our Creator’s hand astounds us today. The host of epigenetic factors that switch on or off parts and pieces of our genes shows the awe-inspiring depth and breadth of a dance between DNA and environment. We should rightly feel a responsibility to care for the bodies given to us and make wise choices in diet, exercise, and even the thoughts we think.

However, we also recognize that our bodies have been subjected to impermanence. Despite millions of dollars spent researching life extension, we all are made to eventually die (Hebrews 9:27). Expensive supplements, strict food plans, high-intensity interval exercise, intermittent fasting, breath-training apps, and even the most disciplined and effective “power thoughts” will inevitably fail. At the end of even the loftiest promises of all physical-human-potential movements is death. No so-called “word of faith” can dethrone the God who wrote your very genetics. And in order to have true hope, we must see through the false hopes.

Is there one true hope? Did you know that you are promised an existence without corruptible genes (1 Corinthians 15:53)? Science may fail to save ears gone deaf, eyes gone blind, cancer gone unchecked, and bent bodies wracked with pain. However, our Creator has a plan to give us a brilliant existence at our future birth into His Family (John 3:5). God is not just kicking the can down the road—He will not just give us another corruptible genetic structure by reincarnating us as chickens, pigs, cows, or even superhumans.

God is preparing for a task that only He can fulfill. He plans to make a very mortal you into an immortal being (1 Corinthians 15:54). He plans to give you power that defies imagination—limitless power that will extend across our expansive universe (Hebrews 2:8; Philippians 3:21). We behold with awe the fearful and wonderful design of our bodies (Psalm 139:14), yet the wonder of our current design cannot even begin to compare with the future your Creator has in mind for you (1 Corinthians 2:9). Genetics are powerful. Your Creator, who designed your body and plans an incredible future for all mankind, is even more powerful. 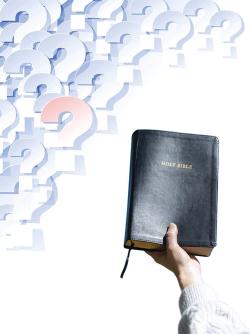 Is the Holy Spirit a Divine Being?