In June 1835, in what became modern-day Ontario, the doors opened to the newly constructed Kingston Penitentiary, later known to inmates and guards alike as “KP.” As the word “penitentiary” suggests, it was built to remove the morally and spiritually corrupt from society and allow them time to reflect on their crimes in order to repent and reform. KP was part of a grand Victorian experiment to rehabilitate those who broke the law and strayed from societal rules. The 1834 Penitentiary Act of Upper Canada, passed a year before the first inmates were incarcerated, set out the intentions behind the prison: “If many offenders convicted of crimes were ordered to solitary imprisonment, accompanied by well-regulated labour and religious instruction, it might be the means under providence, not only of deterring others from the commission of like crimes, but also of reforming the individuals, and inuring them to habits of industry” (“An Act to provide for the Maintenance and Government of the Provincial Penitentiary, erected near Kingston in the Midlands District,” Statutes of Upper Canada, 4 Wm. IV, c.37, s.1834).

The penitentiary’s initial construction and continuing expansion was carried out by its inmates. KP’s location was selected due to an abundance of limestone, as a quarry was to serve as one of the main spheres of penal labour. Inmates spent their ten-hour shifts pulverising the stone. Other forms of labour were noted by Charles Dickens when he visited the prison in 1842: “There is an admirable jail here, well and wisely governed, and excellently regulated, in every respect. The men were employed as shoemakers, rope makers, blacksmiths, tailors, carpenters, and stonecutters; and in building a new prison, which was pretty far advanced towards completion. The female prisoners were occupied in needlework” (Charles Dickens, Pictures from Italy: And American Notes for General Circulation, p. 362).

Kingston Penitentiary is older than Canada itself; Confederation didn’t occur until 1867. It was the very first penitentiary in British North America and had been one of the longest-running prisons in the world when it closed in 2013, notorious for housing some of Canada’s most hardened criminals. As Dickens noted, both men and women were brought to the prison, and even children were not exempt from the roster. One of the youngest inmates to serve time in KP was an eight-year-old boy named Antoine Beauche, a pickpocket from Montreal.

Life in KP was almost silent, aside from the monotonous bell with which guards kept rigid time and directed prisoners to and from the mess hall. No one was permitted to speak or even to whistle, which brought a sense of almost total isolation and created a monastic atmosphere. This was intended to encourage the inmates to reflect on their crimes in a process of self-examination. Corporal punishment was inflicted upon those who disobeyed the strict regulations. Receiving dozens of lashes from “the cat,” being confined in total darkness, and being forced to stand for as long as nine hours in a coffin-like structure called “the box” were just some of the measures used to correct infractions. According to a CBC article, “After receiving 1,200 lashes, prisoner James Brown was declared insane by the prison surgeon” (“Kingston Pen’s children, child killers, murderers and monsters,” Daniel Schwartz, CBC News, April 23, 2012).

The prison regimen was intended to reform the incarcerated individuals, but the effectiveness of the system largely depended on the ability of the guards and their superiors to be fair and just in fulfilling their duties. Cell conditions, discriminatory application of discipline, and extreme methods of punishment often failed to correct inmates, and instead fueled embitterment, encouraged suicidal tendencies, and in some instances even led to madness. The environment of fear and hatred among inmates was another key factor in KP’s failure to reform criminals and “inure them” to habits of industry. Utter contempt developed between prisoners and guards. This hatred boiled over in three major prison riots during the twentieth century, despite several prison reforms that had been instituted.

Mankind’s efforts to redeem and regenerate humanity are a perpetual struggle. Major Walter P. Archibald, Canada’s first Dominion Parole Officer, said that, with regard to the prison reform system, “if we are to expect results from our efforts, we must bring the human life in contact with its Author, for in and through Him only is found the vital force of a redeemed and regenerated humanity” (“Dominion Parole Officer’s Report,” CSP no. 34, 1914, p. 21).

The history of Kingston Penitentiary offers a good analogy for us all to consider. Like the inmates of KP, we make our own prisons when our actions stray from the established morality of the Bible. Whether we realise it or not, any deviation from or breaking of God’s law results in varying forms of physical, social, or psychological punishment, as well as spiritual isolation.

Correction begins in the heart—and the most effective reform comes when we yield to our Creator and let Him change our hearts and minds to reflect His perfect example. After all, it was He who stood up in a Jerusalem synagogue to read these words from Isaiah: “The Spirit of the Lord God is upon Me, because the Lord has anointed Me to preach good tidings to the poor; He has sent Me to heal the brokenhearted, to proclaim liberty to the captives, and the opening of the prison to those who are bound; to proclaim the acceptable year of the Lord…” (Isaiah 61:1–2; Luke 4:18). These words were not about releasing society’s convicted criminals from their correctional institutions; as Christ stated in His sermon on the mount, “Assuredly, I say to you, you will by no means get out of there till you have paid the last penny” (Matthew 5:26). Rather, it speaks of all humanity being freed from the bondage and ultimate punishment of sin, which is death (Romans 6:23), and of the prospect of becoming untangled from the perpetual cycle of sin and its consequences, of crime and punishment. This will only occur when each human being’s carnal nature is removed.

Thankfully, our Creator has paid our debts, and now the obligation is on us to respond by making sure that we submit to Him in order to become justified and have our actions, thoughts, and words reflect His actions, thoughts, and words. This applies to those incarcerated inside our prison systems, to the guards who watch them—and indeed, to each and every human being. 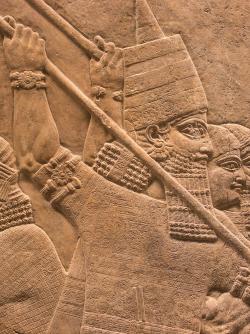