How will civilization end? | God's plan holds hope for the future
Tweet

Can We Save Ourselves?

A long time ago, in the ancient land of Mesopotamia—so long ago that the land was not yet known by that name—a young civilization flourished under a common language, a cohesive culture, and the shared purpose of subduing the perceived threat of mankind’s extinction. In what were known as the plains of Shinar, civilization’s very survival was at the forefront of the fledgling community’s minds and the driving force behind the focus of their efforts.

A little over a century had passed since God had intervened in human history by nearly annihilating all life on the planet with a devastating global flood. The physical and psychological effects of the deluge led the masses to follow a strong dictator, a man of renown called Nimrod, under whose leadership began one of the largest architectural feats of the ancient world—construction of what we know as the Tower of Babel. Nimrod’s expansionist objectives—with the construction of various cities in the region and specifically that of the Tower of Babel—may have been touted as an attempt to prevent another catastrophic event from bringing civilization, as he knew it, to an end. The tower was a symbol of mankind’s efforts to take matters into its own hands and to devise its own methods of self-preservation on the rather miraculous “blue marble” we call home, as it spins on its axis at a speed of 1,000 mph (at the equator) and hurtles through space at 67,000 mph. The arrogance of those involved in building this tower is staggering, and it has persisted throughout time. Various languages and cultures were formed in the confusion of Babel, all of which inherited—and still propagate—the same carnal premise motivating Nimrod and his followers: that we are capable of taking matters into our own hands and dictating the terms of our own existence.

So, let us now fast-forward to the present age—a time when humanity finds itself surrounded by technological advancement unlike anything imaginable to the ancient world.

The Age of Mankind—Or the End of Civilization?

Science and human reason have reached new heights of achievement, yet mankind faces the supposed threat of catastrophic global climate change. Heads of nations around the world convene to discuss the various implications that might be brought about by an increase of just one or two degrees Celsius. Agreements are made, climate pacts are drawn up, and targets are set. Mankind is determined to take matters into its own hands and change the predicted direction of the earth’s climate in order to save us from the threat of extinction.

In Canada, Chief Justice Richard Wagner of the Supreme Court recently stated, “The undisputed existence of a threat to the future of humanity cannot be ignored” ("O'Toole says carbon price ruling confirms climate change real, but levy isn't the way to fight it," CTVNews.ca, March 25, 2021). The Court recently ruled in favour of federal enforcement of regulatory charges, requiring all provinces to enact equivalent levies in order to somehow reduce carbon emissions. Chief Justice Wagner further stated in his ruling that the charges “cannot be characterized as taxes; rather, they are regulatory charges whose purpose is to advance the GGPPA’s [Greenhouse Gas Pollution Pricing Act’s] regulatory purpose by altering behaviour” (“Reference re Greenhouse Gas Pollution Pricing Act, 2021 SCC 11,” CanLII.org, March 25, 2021).

This approach to promoting various methods of changing behaviour in order to avert climate catastrophe is not new. Greenpeace, an organization established primarily by Canadians, has been trying to save the planet since the late 1960s. Peter Wilcox, a sea captain and activist for Greenpeace, wrote about the primary goal of climate activists:

One of the main reasons that environmentalists and activists do what they do is that we are trying to save us from ourselves. When boats are in mortal danger, they send out an S.O.S. call. Our ship, Planet Earth, and the passengers on it are in mortal danger so I’m sending out a different S.O.S. signal: “Save Our Selves.” Only we can rescue us from ourselves so I hope we get the message (Greenpeace.org, June 17, 2016).

Society, specifically that of the Western world, appears to be firmly committed to trying everything in its power to reduce carbon dioxide in the atmosphere. It is not the intent of this article to examine the potential threat or benefits to an increase in CO2. It is important to note that our responsibility is to tend and keep the planet and not pollute or disregard its state; however, any attempt to save ourselves from extinction is folly if it does not include complete submission to our Creator and His laws.

Whether or not carbon dioxide is a pollutant or plant food, the hubris required to believe that mankind has the ability to fully master the climate far exceeds that of Nimrod and his followers in building a tower to the heavens. God appears to have been completely removed from all consideration in the hearts and minds of our leaders. The people of Babel needed only to look up at the sky, as the sun broke through the rain clouds, to see the symbol of God’s eternal promise that “the waters shall never again become a flood to destroy all flesh” (Genesis 9:15). Should we be willing to heed, God has recorded these events in the Bible for our admonition. His promise is clearly written in the preceding chapter:

Then the Lord said in His heart, “I will never again curse the ground for man’s sake, although the imagination of man’s heart is evil from his youth; nor will I again destroy every living thing as I have done. While the earth remains, seedtime and harvest, cold and heat, winter and summer, and day and night shall not cease” (Genesis 8:21–22).

Pride Goes Before the Fall

We live in an age not much different from the ancient world. Leaders falsely believe that it is within their power and ability to avoid a future extinction event. For them to believe this means that they have concluded that God doesn’t exist or have lost touch with the reality of their human limitations—or both. God is removed from the picture. The greatest threat to civilization right now is not rising sea levels, the global climate, or any other pollutant—it is, in fact, the widespread corruption of character exhibited by the arrogance of Nimrod and society today.

If you are reading this and have come to the conclusion that God is very much a part of the picture, you can be encouraged by the fact that He is in control and will not permit any catastrophic event that will lead to the extinction of life on our planet. If you would like to know more about just how completely in control God is, specifically regarding the climate, you can request a free copy of our booklet Acts of God: Why Natural Disasters?

Your Future in a Book 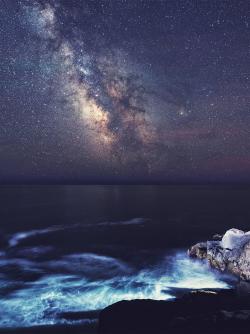 Paths of the Sea, Highways of the Heart