An Israeli court recently ruled that a Jewish man detained for praying on the Temple Mount was not in violation of the law. Many believe the ruling implies silent prayer by Jews is now officially allowed on the Temple Mount—a recognized Muslim holy site.

Muslim and Arab reaction was not favorable. A “spokesperson for Jordan’s Foreign Ministry called the decision ‘null,’ saying it has no legal effect as international law does not recognize Israeli authority over east Jerusalem” (“Palestinians outraged over court ruling allowing Jewish prayer on Temple Mount,” Jerusalem Post, October 7, 2021). Hamas called the ruling a “declaration of war” and “blatant aggression” against the Al-Aqsa Mosque. The Palestinian governor of Jerusalem warned that allowing quiet prayer on the Temple Mount set a “dangerous precedent.”

Arabs know that a sect of the Jews is intent on rebuilding the Jewish temple on the Temple Mount. Jerusalem and the Temple Mount remain a powder keg in the Middle East, just as the Bible stated long ago: “And it shall happen in that day that I will make Jerusalem a very heavy stone for all peoples; all who would heave it away will surely be cut in pieces, though all nations of the earth are gathered against it” (Zechariah 12:3).

The Temple Mount is a site of continuing contention between Arabs and Jews. Biblical prophecy indicates that the Jews will resume sacrifices on or near the Temple Mount at the end of the age. Watch prophecy unfold as events converge to allow this milestone to occur.

Retired U.S. Foreign Service officer Jeff Goodson wrote, “The Afghanistan-Pakistan region hosts the largest collection of terrorist organizations in the world, including 20 of 61 groups designated by the U.S. State Department as foreign terrorist organizations. All of them—including Al Qaeda and the Islamic State—are now celebrating this epic victory over the infidels.” Rather than making peace and ending conflict, President Joe Biden has “opened the gates of hell,” according to Goodson, who concludes, “Fourteen centuries of war between Islam and the West just got ramped up on steroids” (“In Afghanistan, We've Opened the Gates of Hell,” The Hill, August 30, 2021).

The European Union’s high representative for foreign affairs, Josep Borrell, noted that “the need for more European defense has never been as… evident as today after the events in Afghanistan.… There are events that catalyse the history. Sometimes something happens that pushes the history, it creates a breakthrough and I think the Afghanistan events of this summer are one of these cases” (“US withdrawal from Afghanistan will lead to EU army, says top diplomat,” The Guardian, September 2, 2021).

Afghanistan may act as a “catalyst” that pushes history in a new direction—both for a coming European “beast” power and a Middle Eastern “king of the South” (see Daniel 11:40–45). America’s withdrawal already calls to mind the prophecy against sinful Israel, that “you shall flee when no one pursues you” (Leviticus 26:17). It appears that prophetic events are picking up speed.

The European Union is launching a new initiative to compete with China’s Belt and Road Initiative (“EU launches ‘Global Gateway’ to counter China’s Belt and Road,” Politico, September 15, 2021). In her recent State of the European Union address, EU Commission President Ursula von der Leyen declared, “We want to create links and not dependencies”—a clear contrast to how the EU and much of the world views China’s project.

In the same speech, von der Leyen also announced a plan to “link up research and design in different countries, coordinate funding among EU states and jointly create a ‘state of the art ecosystem’ of microchip companies.” This European Chips Act is intended to help Europe catch up to the United States and China on microchip technology and eliminate dependence on those nations. Commenting about the venture, von der Leyen stated that the effort is not just about competitiveness, but also a matter of “tech sovereignty.” She reiterated the need for military independence from the U.S. and quoted a declaration from one of the EU’s “founding fathers,” Robert Schuman: “Europe needs a soul, an ideal, and the political will to serve this ideal” (Politico, September 15, 2021).

Europe has great ambitions, but its base of 27 nations—with different languages and cultures and historical animosities—continues to meet barriers to unified forward action. However, biblical prophecy indicates that a core of European nations led by Germany will come to the fore and lead Europe and the world economically and militarily—for a time (Revelation 17:12). The proposals put forth in von der Leyen’s recent speech could be some of the tools this European core will use to propel itself forward. It may take a crisis and a stronger and more charismatic leader to bring this about.

In the Tigray region of northern Ethiopia, ethnic forces from a neighboring region, apparently allied with Ethiopia’s Nobel Peace Prize-winning prime minister and troops from neighboring Eritrea, may be committing serious atrocities. According to observers, these forces are rounding up Tigray natives and “throwing thousands of men, women and children into makeshift ‘concentration camps,’ cutting off limbs and dumping mutilated bodies into mass graves as part of an orchestrated ethnic purge” (“Ethiopia’s Tigrayans rounded up, mutilated and dismembered in civil war ethnic purge,” The Telegraph, September 5, 2021). Satellite imagery shows large pits next to each alleged concentration camp slowly filling up.

The Bible predicts that, as the end of the age approaches, “nation will rise against nation” (Matthew 24:7). This phrase can also be translated as referring to one ethnic group warring against another. In northern Ethiopia, there are three major ethnic groups, including the Tigray. The alleged aggressors are another ethnic group, the Amhara.

However, the Bible also reveals that a peaceful future is coming, when the weapons of war will be turned into farming implements (Isaiah 2:4). This coming time of peace is depicted by the annual fall Festivals commanded by God in the Bible. Although many theologians claim these annual Festivals are only “for the Jews,” the Bible clearly states that these are the “feasts of the Lord” (Leviticus 23:1–2) and will eventually be observed by everyone in the world (Zechariah 14:16–19). 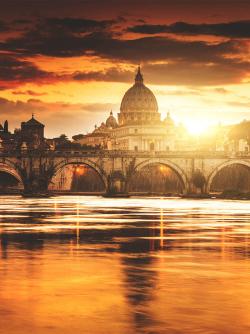 Are You Frustrating Your Kids?

The Precious Few Who Get It