Giants on a Sea of Grass | Tomorrow's World
Tweet

Far from being an eco-disaster, our bovine friends and the other ruminant, cud-chewers of our world are actually good the environment. Learn about the vital, replenishing role God designed them to play on the fields and prairies of planet earth.

American explorer Meriwether Lewis, serious and exacting, was awestruck upon first encountering the boundless plain that opened up to him in 1805. Under the summer sun, he faced “one continued level fertile plain as far as the eye can reach, in which there is not even a solitary tree or shrub to be seen” (Stephen Ambrose, Undaunted Courage, p. 216). On that plain, he found vast herds of elk, deer, buffalo, and pronghorn antelope. A naturalist ahead of his time, Lewis saw what scientists studying ecosystems today are just beginning to understand: ancient grasslands on all the continents are just as vital to the environment as great forests, sustaining varieties of plants and animals that are just as important as those of forested ecosystems. Finely balanced and tuned by our Master Designer, grasslands and grazing animals both contribute to healthy soil. They are just as stunning seen under today’s scientific lens as they were to Lewis and Clark’s gaze 200 years ago.

Today—in the midst of over-plowed modern farmland with swirling airborne topsoil—one might not realize that early American settlers found prairies overspread with grasses so tall that one could have trouble finding a dugout shelter among them. Even further back in time, on the North American Great Plains, were waves of migratory grazers like the wooly mammoths and giant prehistoric bison, which long ago gave way to eventual populations of American bison and pronghorn antelope. (See TomorrowsWorld.org for more creationist insights on prehistoric animals.) At their peak, vast herds of American bison (“buffalo”) may have numbered 50 million, triple the population of American citizens of the 1840s. The lumbering nature of these land beasts belies a delicate relationship and symbiosis of prairie and prairie giant. Today, with little virgin land to study and soils depleted by modern industrial farming, grasslands are often neglected by ecologists in favor of more fashionable, forested ecosystems. Wildlife grazers and grasslands in Africa, Europe, Asia, Australia, and North and South America were once examples of the beautiful design and engineering of our Creator.

Whether wrenching up bunches of tall grasses with a prehensile tongue or selectively plucking grass leaves with flexible lips, each animal has been designed with the eating style to meet its metabolism’s needs. The very distinct ways in which each species grazes have different effects on the grasses as well as on the soil. And, although they may seem to graze randomly, eyes on the ground, in fact, the animals’ movement serves the grasses and ground that feed them in a rather efficient manner, and even domesticated cattle, given the option, will not graze the same spot for more than one day. According to the Texas A&M AgriLife Extension Service, grazers seem to have a “reference memory” that actually maps a pasture so they don’t return to an area for 20 days or longer. Thus, grazed land has time to be replenished with healthy new growth.

The amount of grass blades or leaves has a specific effect on plant health. As they nibble the tips of field grasses, migratory grazers stimulate vigorous new, leafy plant growth by increasing the availability of nutrients. Young, green growth produces more food reserves for root and whole-plant development. The increased food reserves produced by new growth make for a more resilient plant overall, but also feed the deepening root mass. A limited degree of root volume dieback contributes to sequestering carbon within the soil, enhancing the porosity of topsoil, which is then more easily penetrated and saturated with water, even slowly adding to topsoil depth. Animals that wrench grasses by their roots have some similar effects on the soil and make room for surrounding plants to spread out with new growth.

How Can You Get So Big Eating Nothing but Salad?

Many grazers, with their unique digestion, fall within the “ruminant” classification of herbivores. After the ingested plant matter is crushed by powerful molars and pH-buffered by saliva, the ruminant swallows the chewed food into the first of a series of compartments in its stomach. The food later reverses direction, powered by ingeniously equipped esophageal muscles, and the regurgitated food, cud, is re-chewed.

Once sufficiently chewed, the fibrous plant matter proceeds to a stomach compartment that functions like a bacteria-, protozoa-, and fungus-laden fermenting vat. This section of the stomach extracts carbohydrates from indigestible plant fibers. Incidentally, this digestive process is what makes grassland grazers such efficient manufacturers of meat for grassland predators—or, for that matter, beef-eating humans.

Meanwhile, at the other end of the animal, digested vegetable matter becomes nutrient-dense fertilizer and simultaneously disperses seeds—without the need for fuel-guzzling machinery. Long before today’s crude chemical fertilizers, manure from wildlife grazers supplied nitrogen, phosphorus, and minerals in a highly bioavailable, slow-releasing form. Spread throughout a pasture, it prevents leaching and reduces surface water contamination.

And as the grazers also trample unutilized, higher-carbon grasses and reeds into the ground, manure deposits increase the humus content of the soil, thereby building its structure and depth. Migratory wildlife and even the domestic simulations of frequent cattle/pasture rotation effectively sequester otherwise lost carbon back into the soil. That is part of why the soils of virgin prairies measured in yards deep, compared to today’s inches. According to historian Stephen Ambrose, Meriwether Lewis dug in American grassland soils to a remarkable 17 feet.

Destruction and Renewal, from Soil to Spirit

Around every turn are complex interplays and ripple effects of grazer and grassland for rebuilding soils. Grazers function like four-footed “mowers” that, with proper population balance, optimize grass health. They trample the old, underused vegetation and drop manure “fertilizer” for carbon-sequestration and enhanced soil structure. They utilize “solar-powered” (grass photosynthesis) vegetation to manufacture foodstuffs (meat) for carnivores and omnivores. Virgin soils under ancient grasslands demonstrate depth and quality that has tantalized farmers for centuries.

However, grasslands such as early frontier explorers encountered are fast being depleted. Excessive industrial soil cultivation results in tens of thousands of tons of topsoil lost as airborne dust every year. Landslides, “dustbowl”-level storms, soil depletion, and associated food shortages loom large on the horizon.

But a time is coming when the finishing touches will be put on a truly renovated planet with healed lands. The prophet Isaiah foretold that “the parched ground shall become a pool, and the thirsty land springs of water; in the habitation of jackals, where each lay, there shall be grass with reeds and rushes” (Isaiah 35:7). Dewdrops will sparkle on tall grasses buffeted in the breezes. Morning summer sun will again warm the backs of grazers on wide horizons of the grasslands Lewis admired.

Today, we can see that time only “through a glass, darkly” (1 Corinthians 13:12, King James Version). But we can be assured that grazers and grasslands will function together as part of soil-building, carbon-sequestering mechanisms in that future millennial period. The Creator God crafted not just the grasslands, but all of the earth’s ecosystems in fantastic balance and synergy for the well-being and enjoyment of humankind.

If we can have satisfaction, awe, and appreciation for God’s creation now, how much more is there yet to be discovered and savored in the future 1,000 years of perfect peace? Is it possible for us to experience in our lives now a foretaste of freedom from evil? Learn more about the millennial period of peace and how to let Jesus Christ be your King now in our booklet The World Ahead: What Will It Be Like? 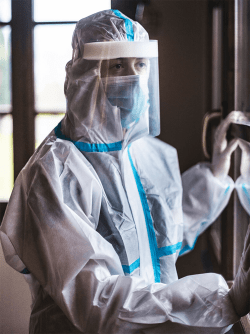