For 70 years, NATO has been a key player in efforts to establish world peace. Yet our global problems remain. Will we ever achieve peace?

Soon after the conclusion of World War II, the victorious Allies formed a military counterbalance to resist the Soviet threat to Europe’s newly won peace. They called it the North Atlantic Treaty Organisation (NATO), and it is 70 years old this year. Since NATO’s establishment, Western Europe has enjoyed an unprecedented period of peace and security. NATO has adapted itself to changing circumstances and widened its scope to include diplomatic and crisis resolution roles. Its membership has dramatically expanded from 12 to 29 countries and it has survived diverse threats to its survival.

This raises some important questions. With U.S. President Donald Trump insisting that reluctant NATO members should meet the agreed minimum contribution of two percent of their national budgets toward defence spending to support NATO operations, some are once again questioning the organisation’s ability to survive in its current form. Should the United States of America continue to shoulder the largest share of NATO military costs in order to secure Europe’s peace in the face of increased levels of Russian aggression? Should Europe be doing more to look after itself? What if the European Union decided to finance its own competitive military forces, if the U.S. were unwilling—or perhaps unable—due to more pressing issues in the Pacific? Will NATO always be there to guarantee the peace of Europe, or is there coming a time when there will be no more NATO? Biblical prophecy on this subject may well surprise you. The Bible points to a different and more lasting solution to the problems of Europe and the world. But before we look into the prophesied future, let’s first look at NATO’s past and present successes.

The main aim of NATO is to defend the freedom and security of its member nations, especially those in Europe. In 1948, the discussions leading to the NATO Alliance were prompted by the Soviet consolidation of power and influence in Eastern Europe. The North Atlantic Treaty was signed on 4 April 1949, including the critical Article 5 for Collective Defence: An attack against one Ally is considered as an attack against all Allies. The 12 founding members were Belgium, Canada, Denmark, France, Iceland, Italy, Luxembourg, the Netherlands, Norway, Portugal, the United Kingdom, and the United States.

For decades during the Cold War, the NATO Alliance minimised conflict with the Soviet-led Warsaw Pact countries through the imminent threat of nuclear annihilation of both sides (the so-called MAD doctrine—Mutually Assured Destruction!). By the 1960s, with nuclear deterrents in place, NATO essentially recognised its existence was critical to ensuring U.S.-Soviet nuclear parity. With relative peace as a result of NATO’s protection, the nations of Europe were free to pursue closer economic, social, and political ties by forming the EU.

Internal conflict within NATO hampered its responses to both the 1961 erection of the Berlin Wall and the 1968 Soviet invasion of Czechoslovakia. Such conflicts spurred NATO to develop and incorporate additional strategies to strengthen its military and diplomatic influence. NATO’s role expanded from “peace-keeping”—maintaining the status quo of the Cold War armed stand-off—to “peace-building” in a wider arena through international crisis resolution and managed support for political, economic, and social change.

With the collapse of the Soviet Union in 1989, the Soviet threat melted away. However, this did not mean that NATO could disband. Peace and reconciliation did not bloom in Europe amongst those freed from Soviet influence. Local ethnic conflict flared in the Bosnian War, in which NATO fired its first shots in 1994, bringing down four Bosnian-Serb aircraft violating a U.N.-declared no-fly zone. In Bosnia, NATO learnt that a comprehensive approach was needed to resolve conflicts and build peace: the World Bank was needed for investment, the EU for governance, the U.N. for organising elections, and NATO forces of essentially European national composition for building lasting peace on the ground and to identify with the local population.

In the modern era of international terrorism, NATO’s focus has shifted outside Europe and the North Atlantic to the source of present threats. Current peace-keeping efforts include missions in Kosovo, Iraq, and the Mediterranean Sea, as well as air-policing missions in the African Union. NATO led the U.N.-mandated International Security Assistance Force (ISAF) in Afghanistan from 2003 to 2014 following the allied intervention, transitioning security to Afghan authorities, and involving personnel from 50 NATO and partner nations. More than a thousand NATO personnel lost their lives during this time. Man’s effort to achieve peace has its price.

In July 2018, at a NATO Summit in Brussels, U.S. President Trump highlighted financial burden sharing as a big issue for NATO. He has called for NATO countries beyond the main contributors (the U.S., Germany, the U.K., and France) to take more responsibility for financing their own defence. At the same time, Russia is becoming increasingly assertive in Europe, entering eastern Ukraine and annexing Crimea. This raises more questions: Will NATO face another crisis, as the U.S. threatens to become more isolationist and minimises its involvement? Will the EU be obligated to build a European military force to fill the vacuum created by a U.S. military absence—or even NATO’s demise?

Tomorrow’s World has long written about a European Beast power described in the book of Revelation, involving ten kings or national leaders (Revelation 17:12–13). But end-time biblical prophecy indicates that neither NATO nor any other military force will be able to build or maintain peace in Europe. The Bible states in Isaiah 59:8 that mankind has “made themselves crooked paths” and that humanity does not know the way to peace. The Bible also gives the reason why: As nations, we don’t fear God or obey Him (Romans 3:17–18). We try to bring peace with superior force, and indeed, this is often the only thing to which tyrants will respond—but it is not the lasting solution.

Jesus Christ, the Messiah, will return to this war-torn earth to prevent the extinction of all mankind from superpower clashes in the Middle East involving Russia, China, and the European Beast power at the culmination of the coming Great Tribulation (Matthew 24:22). He is not going to use the forces of NATO or any other human power to bring about true peace. Only the intervention of the Prince of Peace, leading a glorified army of those who fear and obey Him, can stop catastrophic war and usher in an unprecedented time of world peace. Revelation 17:14 tells us, “These [mankind’s misguided armies] will make war with the Lamb, and the Lamb will overcome them, for He is Lord of lords and King of kings; and those who are with Him are called, chosen, and faithful.”

Almighty God is the only one who truly knows how to build lasting peace, a fact that the many sincere individuals serving in NATO will come to appreciate fully in the future. For more information on the world events just ahead of us, read our booklets The Beast of Revelation and Armageddon and Beyond online, or contact the regional office nearest you for a free hard copy. Contact information is listed on page 4 of this magazine. 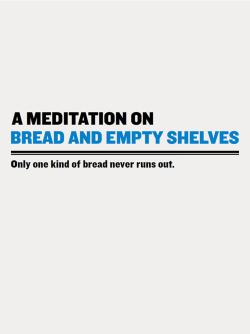 A Meditation on Bread and Empty Shelves