How strong is your faith in the face of trials? Would it surprise you to know that the key to strong faith may not be to witness miracles but in diligent, heartfelt obedience to God and His laws?

Life is short, but made up of millions of choices: Will you get up when your alarm sounds, or roll over and sleep in? What will you wear today? What will you make for breakfast—or will you even have breakfast? How will you treat those around you? Will you believe in God or in blind chance?

That last question may rankle evolutionists, as they generally do not like the expression “blind chance,” preferring to give credit to “the power of evolution.” But then there is Richard Dawkins’ book The Blind Watchmaker—so much for rejecting blind chance!

But life is short, a realization that sinks in more and more as each year passes by. Whether or not we believe in God is a choice. It is a choice because, if we are honest and inquisitive, we search out the evidence, weigh the evidence, and then choose what to believe based on the facts. “Examine all things. Firmly hold onto what is good” (1 Thessalonians 5:21, Modern English Version). We should accept neither blind chance nor blind faith. Facts do not negate faith, nor are facts a substitute for faith. Facts and faith must work together.

Beyond What We See

The children of Israel saw with their own eyes the opening of the Red Sea and passed through it with walls of water on both sides of them. That was a fact of their actual experience, but it did not have any lasting effect on their thinking or behavior; this is where faith comes in as a different kind of evidence. “Now faith is the substance of things hoped for, the evidence of things not seen” (Hebrews 11:1).

Many are familiar with the story of Shadrach, Meshach, and Abednego, who were thrown into a furnace for defying a king’s order—but how many fully understand the story? Daniel 3 tells us that the famous King Nebuchadnezzar built a great image. Whenever the band struck up, everyone was to bow down before that image. Some jealous individuals—apparently with tilted heads and open eyes—reported that these three young men refused to bow down and worship the image; the three were summarily hauled before an angry king and given one last chance.

Reading their response to the king’s command, it is easy to jump to the conclusion that they knew God would save them from the flames. But a careful reading of the account gives a more accurate picture. Too often, people fail to recognize that Nebuchadnezzar’s question at the end of the ultimatum was rhetorical: “And who is the god who will deliver you from my hands?” (Daniel 3:15).

The king believed his power in the situation was supreme. Though no reply was needed or expected, these three young men gave the following bold and confident answer: “O Nebuchadnezzar, we have no need to answer you in this matter. If that is the case, our God whom we serve is able to deliver us from the burning fiery furnace, and He will deliver us from your hand, O king. But if not, let it be known to you, O king, that we do not serve your gods, nor will we worship the gold image which you have set up” (vv. 16–18).

This was remarkable, considering the choice before them. They understood the king’s character and knew this was no idle threat—Nebuchadnezzar would carry it out. So, what did they mean when they said that “our God whom we serve is able to deliver us”? The emphasis should be on the first two words: Our God was their answer to the king’s question, “And who is the god who will deliver you from my hands?”

They answered without hesitation, despite the situation before them. As we read in the older King James Version, “Nebuchadnezzar, we are not careful to answer [you] in this matter.” Principled people, secure in what they believe, have no need to think over a clear choice between right and wrong, and have no regard for the consequences of choosing right. These three young men knew God was perfectly able to rescue them, but did they really expect to be rescued after being thrown in the furnace? Perhaps—but that isn’t necessarily implied in their response. They knew, based on the history of their people and all the recorded miracles—the Red Sea, the walls of Jericho, and a host of others—along with countless personal interventions for which we have no record, that God is real and that He rewards those who diligently seek Him.

So, what did they mean, “He will deliver us from your hand, O king”? Remember, they did not know the end of the story. Would God change Nebuchadnezzar’s mind? Would the cavalry show up at the last minute, as in a suspenseful Western?

No matter—to these three young men of faith, bowing before this idol was beyond consideration. “But if not, let it be known to you, O king, that we do not serve your gods, nor will we worship the gold image which you have set up.” Like Abraham, they were assured of a resurrection from the dead, over which Nebuchadnezzar had no power (Hebrews 11:17, 19). Centuries later, Jesus reminded others of this truth: “And do not fear those who kill the body but cannot kill the soul. But rather fear Him who is able to destroy both soul and body in hell” (Matthew 10:28).

It is easy to read this account and think that these were fearless superhumans who knew what the outcome would be. They didn’t! Yes, they were undoubtedly men of faith and courage. How many of us would have passed this fiery test? If we are honest, not many. How did they?

These three young men believed that God exists and that He rewards those who diligently seek Him—we see this in their choice to defy the king. And, like other men and women of faith, their faith was not blind. David appreciated the wonder of divinely designed life (Psalm 139:13–14). He looked at the heavens and marveled at mankind’s place in God’s awesome creation (Psalm 8:3–4). The Apostle Paul declared that God’s invisible attributes are so clearly evident in the natural world that those who reject Him are “without excuse” (Romans 1:20).

But recognition and proof of God’s existence are not the same as faith. That heart-of-our-being conviction of faith goes above and beyond physical facts seen with our eyes (2 Corinthians 5:7). The children of Israel saw mighty miracles but lacked the evidence of faith to enter the Promised Land. Yet those three young men, who did not themselves see the miracles of the Exodus, standing before the greatest king of their time, chose to believe based on the evidence they did have. That belief was hardened by deep convictions of right and wrong. Daily choices regarding these convictions had set their character like stone. They understood the future beyond this short life and beyond the grave, believing in the hope of eternal life.

Looking to the Reward

Faith must be exercised when we don’t know the outcome. That is the kind of faith Noah, Abraham, and many others possessed. “These all died in faith, not having received the promises, but having seen them afar off were assured of them, embraced them and confessed that they were strangers and pilgrims on the earth” (Hebrews 11:7–8, 13).

We at Tomorrow’s World know that today’s world is heading for trouble such as never has been before—such trouble that, without the return of Jesus Christ, human life would not continue (Matthew 24:21–22). Yet even if mankind were to survive for another thousand years, you and I would still have only a brief window of opportunity. Our lives are short—and the choices we make have everlasting consequences.

One of the most foundational scriptures in the Bible is Hebrews 11:6: “But without faith it is impossible to please Him, for he who comes to God must believe that He is, and that He is a rewarder of those who diligently seek Him.” Shadrach, Meshach, and Abednego believed that God exists—and that He would reward them no matter what Nebuchadnezzar did to them. How about you? 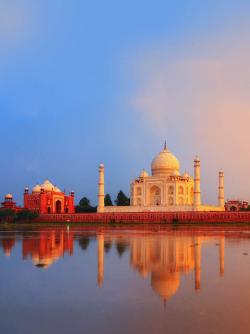