With all the suffering in the world, you need to know God's ultimate plan and purpose—now more than ever!

It was only a year ago that most of us woke up to what would become a “new normal” that was—and continues to be—anything but normal. At the end of 2020, many forecasts and hopes for a better year were voiced. Jonathan Margolis of the UK’s Telegraph asked religious and academic leaders, as well as comedians, scientists, and other professionals, to write a plea to God “if He exists,” presenting why He should give us another chance after considering all that we have messed up here below (“Dear God, we need to talk about 2021,” The Telegraph, December 27, 2020).

These prominent figures were asked to make their case for humanity by writing a short prayer with the subject line “Dear God, We need to talk about 2021.” Many admitted that we have fouled things up on planet Earth. Some pleaded that there are more good people in the world than bad, while others blamed God at least in part, if not in whole. One rabbi reasoned that, after all, hadn’t God messed up as well when He gave us “tsunamis, droughts, earthquakes?” He went on to say, “As for giving us free will: that was a loaded dice, wasn’t it? Thanks for the Mandelas and Einsteins, but what about the Hitlers and Pol Pots? Tell you what: let’s use what happened in 2020 to start afresh; you forgive us, and we will forgive you. And unless I hear thunder in the next 30 seconds, I’ll take that as a deal.”

This disrespectful attempt at humor poorly portrays our Creator and misunderstands God’s plan for mankind. A comedian attempted another bit of humor and finger-pointing with this very disrespectful opening statement: “Hi, big man, long time no speak (although that’s partly your fault for giving me cerebral palsy and taking away my voice).” These commenters would do well to heed what their Creator taught about idle words (Matthew 12:36).

However, I found that Professor Pauline Rudd—named among the top 50 women in science and obviously a very intelligent person—made one of the most off-the-wall remarks: “We’re highly evolved apes, not fallen angels, and although I think the rest of the world would carry on very well without us, it would be a great shame if we weren’t here.”

Please do not misunderstand; I don’t find her statement remarkable for how she believes we arrived where we are today. While incorrect, such a belief has become quite common. But I do believe it is remarkable that she would consider it “a great shame if we weren’t here.” The logic of that belief escapes me.

Here’s why: If humanity is no more than the product of a godless evolutionary process, what ultimate difference does it make whether we survive or die? Or even if the entirety of our planet ceases to exist? If there is no Creator of life, and no purpose for life as we know it, what eternal difference does any of this make? Once we’re dead, who is left to feel “great shame?” No one will be here to bemoan our demise.

Is There a Point to All This?

But let’s imagine for a moment that we were able to somehow lengthen our lifespans to, say, a million years. That would certainly be a long time to enjoy our favorite foods and pursue our favorite pastimes, but once the end came, what difference would it have made? We would no longer have any memories of enjoying our time alive. If everyone is eventually going to die and there’s nothing beyond that, what difference does life make for anyone? As one of the biblical books of wisdom explains:

But for him who is joined to all the living there is hope, for a living dog is better than a dead lion. For the living know that they will die; but the dead know nothing, and they have no more reward, for the memory of them is forgotten. Also their love, their hatred, and their envy have now perished; nevermore will they have a share in anything done under the sun.... Whatever your hand finds to do, do it with your might; for there is no work or device or knowledge or wisdom in the grave where you are going (Ecclesiastes 9:4–6, 10).

This was written by the man considered the wisest of his time, King Solomon of Israel. Setting out to find the meaning of life, he tried the proverbial wine, women, and song—and on a scale none of us can match. He had 700 wives and 300 concubines (partners with lower status), but he even went beyond that. He brought in the greatest comedians and musicians of his day and built fabulous buildings and beautiful gardens. He enjoyed treasures of gold, silver, and precious stones in quantities that the rest of us can hardly imagine, but in the end, he found that all of this was vanity—meaningless, temporary, and unable to satisfy.

Whatever my eyes desired I did not keep from them. I did not withhold my heart from any pleasure, for my heart rejoiced in all my labor; and this was my reward from all my labor. Then I looked on all the works that my hands had done and on the labor in which I had toiled; and indeed all was vanity and grasping for the wind. There was no profit under the sun (Ecclesiastes 2:10–11).

Solomon recognized that it is better to live as a wise man than as a fool—but also recognized that even this makes relatively little difference when life expires. “So I said in my heart, ‘As it happens to the fool, it also happens to me, and why was I then more wise?’ Then I said in my heart, ‘This also is vanity.’ For there is no more remembrance of the wise than of the fool forever, since all that now is will be forgotten in the days to come. And how does a wise man die? As the fool!” (vv. 15–16).

Even with all that Solomon had, “I hated life because the work that was done under the sun was distressing to me, for all is vanity and grasping for the wind” (v. 17). Imagine—he had it all, but might have thought about ending it all!

But now, let’s imagine for a moment that mankind, sometime in the future, found a scientific path to immortality. Based on all of mankind’s history, what would we do after that discovery? No doubt what we have done for millennia: fight, squabble, and attempt to take away that wonderful gift from others until someone takes it away from us.

The Meaning of Life

It is difficult for us to imagine total nothingness, i.e., our non-existence for billions and trillions of years prior to our conception. But if there is no God, what other end can we rationally expect? Do we really believe that, somehow, we can live after death and also be products of evolution? By what process could that ever be possible?

So, why would it be a shame if mankind failed to survive as a species? If there is no God, our sun will inevitably die and it will be as though this grand accident never happened. Who will remain to feel regret?

Yes, mankind has messed up mightily. And no, God is not to blame—in fact, His inspired word warns us often of the consequences of not living His way. But our Creator is working out a grand plan. He has made us because He wants us to live forever in His divine Family, and that means far more than sitting on clouds or staring into His face for eternity—or letting us come to nothing at our own hands.

A free copy of our study guide that explains this great plan, straight from the pages of the Bible, is waiting for you to request it. Your Ultimate Destiny explains what none of those prominent figures solicited by Jonathan Margolis understand—but you can! Why not find out why you are alive? 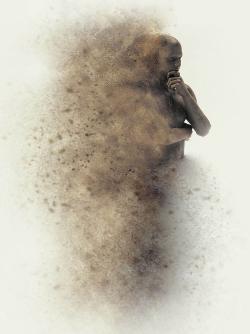