God Save the Queen?

“God save the Queen” is an instantly recognisable phrase of patriotic sentiment in the British Commonwealth. It expresses hope for the monarch’s long reign and respect for her preeminent place in national life; indeed, it is found on all formal proclamations coming from the Crown. It also looks to God to come to the country’s aid in time of need. In the mid-eighteenth century, during the reign of George II and the troubling period of the Jacobite rebellion, the anthem “God Save the King” was first sung, later becoming the national anthem of the UK. Quickly adopted by other royal households across Europe, it remains in use today by nations of the Commonwealth.

The words hearken back to the Bible’s account of King Solomon’s coronation (1 Kings 1:34–39). They were used in the first recorded coronation of an English monarch when Egbert was crowned king in Bath Cathedral in the early 800s AD.

But how can God “save the Queen” when so much of her realm seems to have accepted Friedrich Nietzsche’s famous 1882 edict that “God is dead” (Die Fröhliche Wissenschaft: Leipzig: E.W. Fritzsch, p. 137)? God is certainly not alive in the thoughts and behaviors of many British citizens. In 2017, the Guardian reported on the results of a British Social Attitudes survey, in which more than half of all adults in the UK and almost three-fourths of 18- to 24-year-olds say they have no religious affiliation to speak of (“More than half UK population has no religion, finds survey,” September 4, 2017). A Pew Research Center study reported in 2018 that 65 percent of “religiously unaffiliated” citizens in the UK said they were reared that way. Of that group, more than 70 percent saw science as sufficient to displace any need for religion in their lives.

Greg Sheridan, a visiting fellow at King’s College, part of the University of London, noted in a recent magazine article, “Most British people seem to take it on faith that to have faith is stupid” (“The West cannot survive without a re-energised belief in Christianity,” The Spectator, August 10, 2019). He notes that Britain is more atheistic than his home country, Australia, which in turn is more so than the United States—and that, across the English-speaking world, religious belief is rapidly deteriorating.

Why a Decline of Belief?

Following World War II, Britain’s elites determined to remake British society based upon science, and rationalism rather than spirituality became the presiding ethos. The result has been the rapid secularization of society. In 1963, Anglican theologian Harry Blamires proclaimed, “There is no longer a Christian mind”—the opening sentence of a chapter he titled “The Surrender to Secularism” (The Christian Mind, p. 3). Now, almost 60 years later, writers like Sheridan can make this observation of British society with even greater certainty.

Sheridan’s point is that for Western civilization to survive it needs “a re-energised belief in Christianity.” Sheridan is not the first to point this out. Pope John Paul II, addressing the European Parliament in Strasbourg, October 1988, called for a Europe “united from the Urals to the Atlantic.” Religious unity, rather than political, was uppermost in his mind—a unity resulting from Europe searching “more intensely for its soul” (George Weigel, Witness to Hope, 1999: HarperCollins, pp. 542, 584). Ignoring that plea, Europe has instead sought to whitewash or outright erase references to the part Christianity played in its foundation and identity, as though it were something to be ashamed of. Sheridan sums it up well in his article when he states, “Modern liberal opinion is not only hostile to Christianity, it is positively embarrassed about any connection with it.” This holds true for both Europe and the United Kingdom.

So how can the Western world develop a “re-energised” belief in Christianity when the world around it is becoming increasingly secular? Sheridan, like John Paul II before him, offers no easy answer to the problem, but rather emphasises the need for a return to religion.

Rise of a False Religion

According to a reliable source written millennia ago, there will soon come a religious resurgence in Europe that will seem to show the way. However, it will require one major change in European thought: a willingness to acknowledge the supernatural world, despite today’s widespread rejection of such ideas in favour of rationalism.

The book of Revelation, the last book in your Bible, foretells of a person who will perform signs, wonders, and miracles to deceive the world (Revelation 13:11–17). The result will be a religious revival in which our current rationalistic populace will embrace the creation of a combined religious/economic system. It may appear to be a remarkable religious revival of sorts, but the Bible shows that this will be a decidedly ungodly development. And it will not stand forever—nor, indeed, for very long at all.

The Return of the True King

Regular readers of Tomorrow’s World know that we proclaim the return of Jesus Christ as King of kings and Lord of lords, as set out in prophecies throughout the Bible—not least in the book of Revelation. Jesus Christ’s return will bring about the destruction of this revived religious system, which will fight against Him and be defeated at His return. The result—prophesied and sure—will be the establishment of the true worship of God. This is not the solution that John Paul II sought in his statement to the Europeans, nor subsequently discussed with Soviet leader Mikhail Gorbachev during his visit to the Vatican in 1989. John Paul II sought “a restoration of normality, a return to Europe’s true historical course” (Weigel, p. 602). Rather, the effect of Christ’s return will be that the earth will become filled with the knowledge of God “as the waters cover the sea” (Isaiah 11:9; Habakkuk 2:14).

After the return of Jesus Christ, the citizens of the United Kingdom—and all other earthly kingdoms—will be able to shout, with both understanding and conviction, to the King of kings: “God save the King!” Everyone—everyone—will know that a great God rules in the heavens, and on the earth as well.

If you have not read our booklets Revelation: The Mystery Unveiled! and The Beast of Revelation: Myth, Metaphor or Soon-Coming Reality?—both of which shed an enormous amount of light on this topic—you can read or order them online at TomorrowsWorld.org, or you may request free printed copies from the Regional Office nearest you (listed on page 4 of this magazine). 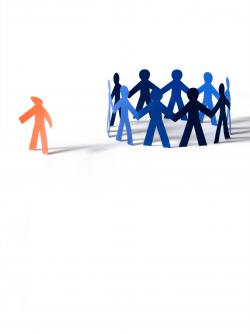 How to Fight Loneliness—Five Ways to Overcome