What do God’s laws have to do with protecting the elderly from abuse or neglect? A sad situation has come about where the very services intended to care for the aged do not always work as expected, but the problem goes deeper. In the Fifth Commandment, God tells us to honor our parents, and that respect is the foundation of a lasting society.

Imagine having an elderly loved one in a care facility and waking up to read a news report like this: “Elderly residents left soiled and unfed after their caregivers fled the premises, 31 deaths in the space of a few weeks: a nursing home in Montreal has become the symbol of the terrible toll coronavirus is taking in Canada’s long-term care homes” (“Horrors revealed at virus-hit Canada nursing home,” The Japan Times, April 19, 2020).

The horrifying situation found on the premises of a Montreal care home during the 2020 COVID-19 pandemic was so appalling it made international news. The Japan Times continues: “Called to the rescue after most of the staff deserted the facility, health authorities found residents dehydrated, unfed for days and lying listless in bed, some covered in excrement. Others had fallen to the floor. Two deaths had gone unnoticed for several days.”

Alas, similar conditions were found in numerous other places across the nation as well. The unusual number of patients succumbing to the COVID-19 virus in these facilities alerted health authorities to the situation.

Exposed by the Pandemic

The coronavirus pandemic has become a modern tragedy throughout much of the world, but in Canada it has revealed the dark secret that many of the elderly are living out their last days in facilities that, while made to look pleasant outwardly, are all too frequently places of neglect. While this is not true of all such homes, too many cases have been uncovered during the pandemic that demand both attention and action to correct a grievous wrong. Dr. Susan Braedley, Associate Professor at Carleton University in Ottawa, reacted to these discoveries in a recent article in which she asked how such appalling conditions could have developed in one of the richest nations on earth:

How did we permit our governments to plan systems that are woefully underfunded and unable to provide safe, respectful and dignified care?… As a society, we tend to devalue and denigrate any adult who is unable to look after themselves, develops disabilities, or cannot “keep up” with the onslaught of rapid social change…. We don’t like seeing older faces and bodies, we stop listening to older voices and minds (“Our long-term care system is failing because we're ageist,” Ottowa Citizen, May 26, 2020).

Braedley highlights that “ageism” in Canadian society—and perhaps in other nations—leads to minimizing the funds spent on caring for elderly people who need assistance. Ageism shapes the public attitude toward caregiving: “Our society has a bad attitude toward care work. We have told ourselves it is work that ‘anyone can do.’” She correctly points out the error in that reasoning: “It takes training and experience to learn how to develop relationships with people who are in pain, confused, or feeling acutely vulnerable, lonely, and scared of death.” Braedley goes on to explain that knowledge and skills are needed to help those suffering from dementia, to support frail people with stiff or aching joints, to patiently feed and enhance the social experience of the meals of someone struggling with swallowing, and to make the whole of their lives easier and happier.

A civil society does not just warehouse its aged members conveniently out of sight, but respects and cares for them with dignity—after all, most of us will reach that point of need eventually. Those responsible need to repent of this hidden sin and correct these criminal conditions. But in our Western society, ageism seems to be taking us in a much darker direction.

A recent court case in the Netherlands, a nation with some of Europe’s most liberal euthanasia laws, demonstrates the declining respect for the value of the lives of the elderly, particularly when they are frail or disabled. News media in both the Netherlands and the U.S. covered the story of Dr. Marinou Arends, a Dutch physician who euthanized a 74-year-old patient who made clear she did not want to be killed. As reported by DutchNews.nl, “Arends put a sleeping drug in her cup of coffee; when the woman later appeared to sit up and draw back from the lethal infusion, her son-in-law pushed her down in her bed again” (“Doctor cleared of murder in euthanasia case says she would do it again,” June 15, 2020).

Apparently, before dementia had set in, the woman had left directives to allow her to choose euthanasia when “the time was ripe,” versus being placed in a care home. “But although the woman repeatedly said she wanted to die, when asked directly, she would then say ‘not yet’…. [Arends] said she had asked the patient three times and had a negative reply.”

When the case became known, the level of concern led to charges being brought against the doctor. The judge, however, indicated to the contrary that the doctor had acted properly and lawfully, and was not even guilty of unethical conduct.

Modern ideas about “assisted death” may sound merciful on the surface, but they have the immediate effect of devaluing human life, making seniors conveniently expendable. This is even more serious when considering that we in the West have a rapidly aging population—yet we celebrate youth and deny the reality and dignity of aging. And because of the societal attack on traditional, biblical family structures and the pressure on both husbands and wives to be active in the workplace, the family home is often no longer a viable place of care for aged family members.

Added to this is an increasing tendency to view the elderly as burdens on society who divert scarce dollars away from the wants of the young. This attitude has developed as our culture has abandoned the biblical principles that once guided it—however loosely—and has instead become a secular society ridden with divorce and uncommitted partnerships. The effects of this transformation are becoming increasingly apparent and include the mushrooming cost of caring for the aged as many families of elderly persons are no longer willing or able to contribute to their support.

A Better Society—“That Your Days May Be Long”

There is great wisdom in the biblical principles guiding family structure. These include direction to ensure that no one, young or old, is neglected and that the aged are treated with respect and love: “You shall rise before the gray headed and honor the presence of an old man, and fear your God; I am the Lord” (Leviticus 19:32).

Those who are taught this principle from youth develop the habit of showing respect, which benefits both the old and the young. The Apostle Paul cited one of the Ten Commandments that God gave mankind to shape attitudes within the family structure: “‘Honor your father and mother,’ which is the first commandment with promise; ‘that it may be well with you and you may live long on the earth’” (Ephesians 6:2–3). As Mr. Richard Ames has written so often in this magazine, “Claim God’s promises!” Blessings will eventually accrue to a nation willing to observe this law.

But a society that, rather than honoring the elderly, permits them to be abandoned, abused, neglected, or euthanized is in violation of God’s law. COVID-19 has shone a spotlight on a hidden sin practiced by a society that has departed from the ways of the God who created mankind. The problems, however, are reversible and would dissipate if humanity chose to live by God’s laws—the only laws that lead to true happiness and life.

The Prince of Peace 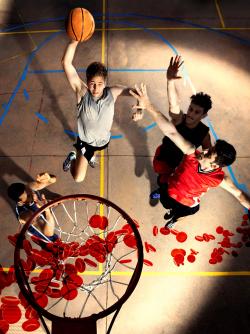 The Life Is in the Blood